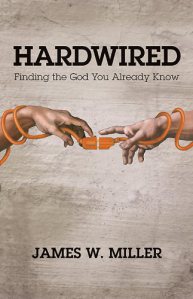 Irreverent. That’s how I would describe Hardwired

by James Miller in one word. Miller appeared unimpressed by Natural Theology, and perhaps even less impressed by current scholarly apologetics. Yet this is, unabashedly, an apologetics work. It’s just not the type that many readers would expect going in. Miller’s approach is presuppositional: that is, he sought to discuss the questions about faith by analyzing those things that people already assume or know.

Illustrative was his comment early on in the work. Miller was approached by a mother who was heartbroken over her son leaving the faith. She asked him, “‘How do I convince him there is a God?'” Miller’s answer is indicative of his apologetic method: “He already believes in God.” This startling statement forms the basis for the rest of the book. Miller’s approach revolved around showing people the God they “already know.”

How might one justify this outlandish claim? First, Miller argued that human beings are not “blank slates”–that is, the human mind is in fact shaping that which it observes even as it observes it: “You and I, witnessing events through the same pair of glasses, would not know the same thing, because your brain and my brain do different things with the knowledge” (42). All knowledge is filtered through the preconceptions one has that sorts it into different levels of experience. Miller provided several reasons for thinking that the notion of our minds as blank slates is wrong (42-44; see also 58-61).

The notion that we are not “blank slates” also means that we filter ideas through a number of pre-existing categories. It also means that a wholly objective approach to discovering truth is impossible; we simply cannot step entirely outside of our presuppositions about reality. Moreover, human beings seem to have a shared experience of certain affirmations, even though some may attempt to deny them. For example, “we assume that our perceptions of the world… are accurate… We assume that there are real moral rights and wrongs… We assume that life has a purpose… We assume that there can be meaningful communication in which two people accurately share what they are thinking” (26). These assumptions are not uncontroversial; indeed, many have sought to deny any or all of them. Hardwired featured concise arguments for the fact of each of these notions.

Apart from these seemingly universal human experiences, Miller also argued that the very position of agnosticism is one which does not cohere with reality. Agnosticism is fundamentally a witholding of belief, but that is itself based upon a supposed ignorance of all the available data. He compared it to a court case regarding evidence: “People are only off the hook when they can show both that they didn’t know and that there was no way they could have known.” It is not enough to plead ignorance: “they are still guilty if they didn’t know because they avoided finding out” (55). The Bible clearly states that all people are capable of knowing God, and stand without excuse (Romans 1). “The onus is on honest agnostics to produce a pretty substantial bibliography of failed research” (56).

The fact of God’s existence may be found throughout reality, argued Miller. First, there is the reality of religious experience, but Miller prefers to view these as “epiphanies” which are “a sudden piercing discovery…” which may “draw our attention to things we’ve previously taken for granted or ignored” (69). Second, the existence of moral absolutes is a universal experience. However, this is not to be taken as a proof for God; rather Miller suggested that it means we have “inclinations that cannot be filled by anything but the exisence of God” (91). Even the atheistic moral objection to the God of the Bible assumes objective morality, because it assumes that they are capable of discerning real right and wrong (91-92). The very fact of valuation hints at the Creator (108-111).

The Christian faith gives compelling reasons to believe because its story matches and exceeds the criterion of embarrassment: its “hero,” Jesus, is scorned and shamed, not glorified and given rule over all nations (121ff).

The existence of God, Miller argued, is not tied to arguments or debates, rather, “What convicts us of the existence of God [are]… the soft, subjective facts of an experience that resonates with human longing and confirms are deep suspicions” (156). Hardwired is Miller’s attempt to point to those experiential factors.

By way of analysis, I first note that I think Miller has done an excellent job summarizing a number of extremely complex and difficult issues in ways that the “person on the street” could pick up the book and understand. He is concise and clear. Moreover, I sympathize in many ways with his approach. It seems to me to be true that humans cannot approach a topic as though we are “blank slates” ready to take whatever input we are given without layers of interpretation. That, I think, is the greatest strength of Miller’s approach. He pointed out the deeply seeded assumptions we hold which influence the way we view reality and showed how these lead to God.

However, I wonder about the coherence to Miller’s approach. His critique of natural theology does not sit well with his appeal to some of the very types of arguments that natural theologians use. For example, his appeal to objective morality is essentially no different from the defense provided for the “moral argument” by natural theologians like William Lane Craig, whose approach Miller criticizes. His presuppositional argument itself depends upon some forms of evidentialism (and here I am intentionally wording this to avoid being accused of being unaware of the fact that presuppositional apologists do use evidence–it is manifestly true that even the staunchest presuppositional apologist uses evidence… my point is that the method Miller uses is often evidentialist in its approach). Ultimately, readers will be left with what essentially amounts to an existentialist evidentialism, which seems itself to rely upon natural theology in a number of traceable ways.

Another difficulty I had with Hardwired is that it seemed Miller sometimes overstated his case. Perhaps the most obvious example of this, in my opinion, is his discussion of evolution. He discussed natural selection and sought to evaluate it by looking at humans: “[I]f natural selection actually works, a few million years should make for some pretty shiny, strong, effective gladiators who have good teeth and rarely catch cold… Specifically, there are some traits of humanity that should by all means have been weeded out by now: sleep (which makes people vulnerable to predators for a third of their lives)… endoskeletons, appendices, wisdom teeth, birth defects, stupidity, and obesity” (94).

I’m not about to dive into biology, which is by no means an area of my expertise, but it seems to me that none of these are required expectations given Neo-Darwinism. Miller’s critique does not take into account the fact that humans have worked using their intelligence to circumvent many of these difficulties (i.e. we live in shelters which keep us safe while sleeping; appendices still have function; etc, etc.). The critique offered here also seems shamelessly teleological, which is the very thing Neo-Darwinists would deny within their system.

Hardwired is a brief missive which applies presuppositional apologetics in a straightforward, easy-to-understand fashion. Miller doesn’t fall into using terminology that will be difficult for the uninitiated to understand. Instead, he provides a coherent beginning-to-end approach in how to argue for faith from his presuppositional approach. It is a commendable work for its simplicity, and despite the areas of disagreement I noted above, I certainly think it is worth a read. Miller has a way of answering the difficulties that people raise against Christianity in concise but convincing fashion. It’s a mixed bag, but one well worth the time spent.

I received a copy of Hardwired free of charge for review. I was only asked to give an honest review of the book.

One thought on “Book Review: “Hardwired: Finding the God You Already Know” by James Miller”