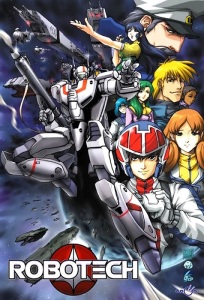 Robotech was one of the first anime programs to be released in the United States, in 1985. So I’m a little late to the party to finally be watching it, but I always wanted to when I was little, and my wife got me the series for Christmas a year ago. I was surprised by the depth of some of the worldview-level issues that were addressed in the show alongside a story of aliens vs. humans. Here, I will examine some of these worldview issues from the show from a Christian perspective. There will be SPOILERS in what follows.

Pacifism in the Face of Annihilation

One of the characters who shows up later on in the show is Lynn Kyle, is a pacifist. He believes that the army is repugnant, at best, and harbors a deep detestation for military personnel. Yet the story Robotech tells is one in which an alien race is bent on wiping out humanity. Is pacifism a moral choice in the face of annihilation?

I can’t help but think of Dietrich Bonhoeffer when I think of situations like this. Staying silent in the face of injustice is itself an act. To stand aside and let others defend oneself while there is a whole people bent on xenocide is itself an ethical decision which seems to have moral implications. I would argue those implications show that such inaction is injustice, and this is a theme found throughout Christian theology from around the time of Augustine.

Rick Hunter and Lisa Hayes demonstrate the attributes of loyalty and honor. Rick is constantly loyal in his friendship to Minmei, as well as his loyalty to the other members of his squadron. Lisa’s honorable commitment to Rick and to her crew on board the starship is also worthy of mentioning. Together, they demonstrate virtue.

Christians have long debated what kind of ethical theory best matches up with reality. Virtue ethics is the kind in which one’s character guides behavior. Here, we can see that Rick and Lisa embody a kind of virtue ethic which can serve as a model for remaining loyal and honorable even amidst temptations.

Domestic Abuse and Leaving the Relationship

A powerful theme in Robotech is that of cultural conversion. Minmei’s singing ultimately brings some of the Zentraedi onto the side of the humans (whom they call “micronians”). Although at times simplistic, this portrayal resonates with some pretty deep themes. What is it about music which can resonate with us? How might we engage with culture in ways that are impactful? What can we do through music to present a winsome case for Christ?

Christians have debated how conversion relates to culture and whether conversion means an abandonment of one’s own culture. Richard Twiss, for example, writes about this from the perspective of Native Americans who are followers of Christ. The power of culture to persuade is something that I think we must not lose sight of. Whether it is song, dress, or something else, cultural expressions can often be integrated into Christianity and even made sense of by Christianity. If all truth is from God, as seems to be right to affirm, then Christian engagement with the culture is a powerful tool for conversion and discussion.

What? Did I just write a worldview-level post on an anime? You better believe it. I always say that every story has a worldview (a phrase that I got from Brian Godawa, though I don’t know who coined it). Robotech was no different. I recommend watching the series and seeing what kind of worldview questions you find in it. Or, if nothing else, at least you can enjoy the giant robots.

J.W. Wartick has an MA in Christian Apologetics from Biola University. His interests include theology, philosophy of religion--particularly the existence of God--astronomy, biology, archaeology, and sci-fi and fantasy novels.
View all posts by J.W. Wartick »
« Book Review: “Atheism’s New Clothes: Exploring and Exposing the Claims of the New Atheists” by David Glass
Book Review: “The Faithful Artist” by Cameron J. Anderson »