Book Review: “The Future of Open Theism” by Richard Rice 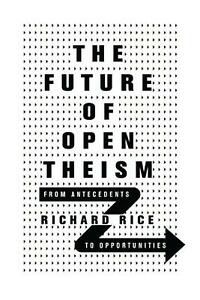 Richard Rice’s The Future of Open Theism introduces the theological topic of open theism, traces its past development, and outlines its impact on several major doctrines and how they might be developed farther along the lines of open theism. Open theism is the view that “God is open to the world, and the world is open to God. Both Creator and creatures contribute to the ongoing course of events, and God experiences these events as they happen” (1, Rice’s definition expands a paragraph or more).

The book is divided into two parts: Part I is “The Origin and Development of Open Theism” and Part II is “Themes of Open Theism.” In the first part, Rice turns to the historical development of Open Theism. He notes that while open theism largely came to attention due to the book The Openness of God in 1994, it had several historical antecedents. Jacobus Arminius (1560-1609), Rice notes, was “perhaps the essential figure in the history of ‘free will theism'” (11). Arminius opened the path for new explorations of free will in relation to God’s action, but unlike open theists, he did affirm that God’s foreknowledge was absolute (12). Adam Clarke (1760-1832) argued that some historical events were contingent, but due to his view of divine eternity, he still maintained a kind of absolute knowledge of the future for God (12-14). Several other authors are surveyed from later dates as well.

The next few chapters trace the modern development of the concept of open theism, which Rice acknowledges was not directly found in any of the antecedents noted in the first chapter, as well as the controversy that almost immediately surrounded it. The chapter entitled “Critics and Conflicts” is not just a fascinating look into the theological pushback open theism faced but also hints at the political workings of organizations like the Evangelical Theological Society and various universities. One of the largest conflicts was over whether open theists could remain in specifically evangelical circles, given the apparent denial of long-held notions of God’s foreknowledge in their theological system. Some argued to shut open theists out of the Evangelical Theological Society, while open theists made a case that they were making their arguments from Scripture and were thus decidedly in the evangelical camp. Open theists also argued their model of foreknowledge made better sense of passages in which God expressed regret over a decision while also offering a stronger refutation of any notion that God holds/held false beliefs than other systems (57). Open theists were eventually able to carve out space for themselves in theological circles and Rice notes that the shift moved from conflict to conversation from there. The philosophical implications and arguments in favor of open theism are the subject of an entire chapter, and readers on either side will surely benefit from engagement with these. Part I is rounded out with a chapter surveying the various expressions of open theism.

Part II turns to the themes of open theism and major theological developments open theism either has led to or could be developed towards. Perhaps the largest question open theism is posed to answer is the question of human freedom. Open theism seems to provide the most straightforward theological path for genuinely free human action. Standing against various philosophies, potential scientific conclusions (i.e. naturalistic determinism), and theologies that create major problems for human free action, open theism gives an alternative that attempts to truly open human freedom as a possibility. Rice also makes a powerful argument that open theists ought to eliminate the term “limit” from their language related to God and open theism. He notes that open theism is not placing limits on God’s activity, but rather acknowledging biblical language related to those acts and attempting to stay true to the fullness of God’s–and human–activity. Other theological concepts that open theism has either had large impact on or could be developed towards include the doctrine of the Trinity (and seeing Trinitarian relations in time as acts of divine love taking place as part of God’s experience in time), Christology (a stronger commitment to divine activity in everyday human life), the church (spiritual gifts, God’s action in human society, etc.), and doctrines of the Last Things (transforming relationships with God).

Rice provides a broad look at the total scope and history of open theism in this impressive book. As a reader who is not an open theist but who has read quite a bit on the topic, it was still informative and even challenging at times. Rice delivers a book that is as described–an overview of open theism from past through future–while also touching upon an impressive range of points while never losing focus. There are many areas this reader would critique as far as the content is concerned (the novel nature and only recent discovery of what is alleged to be the correct view of divine foreknowledge, for example), but as far as the book itself goes, it does what it sets out to do and more. For that, it is an invaluable resource for those interested in learning about open theism.

The Future of Open Theism demonstrates that open theism is a powerful theological concept, but it also shows that there is still much work to be done for establishing the concept within broader Christian thought. Whether one agrees with the position or not, it is an edifying, challenging read.