Book Review: “Faith Across the Multiverse” by Andy Walsh 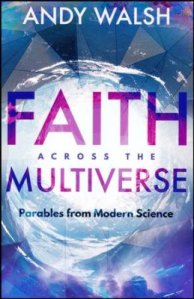 Faith Across the Multiverse is a difficult book for me to categorize. Based on the title and cover blurb, it seemed a bit like another entry in the crowded field of basic science-faith works. It’s an interesting field, but one that has many, many entry points. Yet as I continued to read the book, I discovered an appreciation for the unique style and depth of discussion that definitely separates it from the pack.

Walsh separates the book into four parts: The Language of Mathematics, The Language of Physics, The Language of Biology, and The Language of Computer Science. These titles might lead one to assume that this is (again) yet another book arguing for design or intelligent design. It is not. So it isn’t a broad introduction to faith-science issues, and it isn’t an entry level book on ID theory. What is it? It’s a kind of stream of consciousness look at several deep science-faith topics with some nerdy anecdotes and Biblical interpretation sprinkled in. That’s a mouthful, and that’s because this book is heady, much headier than one may expect. It grew on me more and more as I read it.

Each chapter has some kind of theme woven through it, typically drawn from some part of nerd culture. For example, in chapter 7 Orphan Black, a Canadian science fiction drama that I’m currently watching myself, is used to talk about nature vs. nurture, DNA coding, the church body, and denominations. It should be easy for readers to see why the book deserves a careful reading. Yes, many, many topics are raised all at once, but Walsh does an admirable job tying them all together and relating them back to Christianity in realistic ways. It’s fascinating to read about Walsh’s thoughts on mathematics and see how he applies them to the Bible and Christian doctrine. This isn’t a kind of 1-to-1 correlation as if Walsh is arguing for some kind of biblical numerology–far from it. Instead, he uses physics, math, biology, and computer science to highlight reasons to believe as we do–and sometimes to challenge those beliefs.

I noted already that the titles of the parts in the book make it sound like it’s arguing for Intelligent Design. It isn’t. Indeed, Walsh actually argues against the theory (though it doesn’t appear in the index) by noting how mathematical models can create seemingly infinite complexity without needing informational input. One example he uses is the Koch Curve, which is a phenomenally complex early look at a fractal that seems to create massive complexity through a very simple form (225ff). The Bible itself speaks to God using seemingly random things to generate information or to work for God’s ends (eg. the casting of lots) (p. 251-252). Evolution, he argues, doesn’t threaten God’s sovereignty any more than a seemingly unknowable outcome on our end (the rolling of dice) means God can’t design or control the process.

The book is truly a monument of imagination, while being grounded in real outcomes, science, and math. It’s fascinating to see Walsh tie Ms. Marvel, the X-Men, or Mark Watney, the star of The Martian into real life scenarios and biblical examples. By my count, Walsh managed to reference 65 books of the Bible in the text, while also drawing in nerd references, Francis Collins, discussions of the soul, and more. I can’t really overstate how remarkable I find the fact that there is unity in a text like this, but Walsh somehow pulls it off and delivers a rather fascinating science-faith work.

Andy Walsh’s Faith Across the Multiverse manages to distinguish itself by both the depth of its science and the fun of its references. It’s a surprising, thought-provoking work worthy of a careful read. I recommend it. Incidentally, I also found the book’s website as I wrote this review, if you’d like to explore further.