From conception, a human 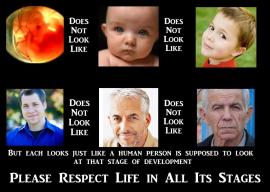 It is important for those on either side of the abortion debate to be informed. One part of that is to realize there are some really, really bad arguments out there. The argument that the unborn is merely a “blob of cells” or “human tissue” is one such argument. Simply put, if one makes this argument they are not on the side of scientific facts.

A survey of textbooks on embryology by medical professionals shows that regardless of what the person on the street says, science tells us that from conception there is a new human being. I will now demonstrate through the citation of many such sources.

Zygote: this cell results from the union of an oocyte and a sperm. A zygote is the beginning of a new human being (i.e., an embryo). Human development begins at fertilization… This highly specialized, totipotent cell marks the beginning of each of us as a unique individual. [Moore, K. and T.V.N. Persaud, The Developing Human: Clinically Oriented Embryology (6th ed.), (Philadelphia: W.B. Saunders Company,  1998), pp 2-18.]*

“Embryo: An organism in the earliest stage of development; in a man, from the time of conception to the end of the second month in the uterus.”
[Dox, Ida G. et al. The Harper Collins Illustrated Medical Dictionary. New York: Harper Perennial, 1993, p. 146]**

In this text, we begin our description of the developing human with the formation and differentiation of the male and female sex cells or gametes, which will unite at fertilization to initiate the embryonic development of a new individual. Larsen, W.J. 1998. Essentials of Human Embryology, Churchill Livingstone, New York, pp. 1-17.*

The development of a human being begins with fertilization, a process by which two highly specialized cells, the spermatozoon from the male and the oocyte from the female, unite to give rise to a new organism, the zygote. [Langman, Jan. Medical Embryology. 3rd edition. Baltimore: Williams and Wilkins, 1975, p. 3]**

The development of a human begins with fertilization, a process by which the spermatozoon from the male and the oocyte from the female unite to give rise to a new organism, the zygote.
[Sadler, T.W. Langman’s Medical Embryology. 7th edition. Baltimore: Williams & Wilkins 1995, p. 3]**

Furthermore, a number of medical professionals testified under oath to a U.S. Senate committee.

“I have learned from my earliest medical education that human life begins at the time of conception.”- Dr. Alfred Bongioanni (University of Pennsylvania)*

“[A]fter fertilization has taken place a new human being has come into being.”- Dr. Jerome LeJeune (University of Descartes)*

Quotes like these could be multiplied almost beyond measure. Scientifically speaking, those who say that the unborn is not a human being are, to put it bluntly, ignorant.

[Want more quotes from professionals? Check them out (each word there is a different link)]

Science, back with a vengeance

Some may think that amassing endless quotes from medical professionals and scientists is not convincing. They’d rather see the evidence themselves. Let me present it very briefly.

1) The zygote has distinct DNA from the mother (and is therefore not part of the mother).

2) About 50% of the time, the unborn has a different gender than the mother (and is therefore not part of the mother).

3) From conception, the zygote grows and organizes itself (and is therefore a unique individual).

4) As long as there is an environment in which the resources required for life continue to be provided, the zygote will continue to mature and, well, live (much like a baby, or a 20 year old).

5) The zygote is alive and continues to grow.

There is a reason the literature sounds so confident that human life begins at conception: those who deny this would have to say that 50% of the time, males with distinct DNA from their “bodies,” who organize themselves towards growth, are reducible to their female mothers. That is what the pro-choice advocate would have to say: “Yes, that male ‘clump of cells’ inside the mother with its self-organization and different DNA is actually part of the mother.” This despite the fact that any DNA test would not show this to be the case. Of course, the female’s DNA would be different as well, so again, the absurdity would have to follow.

Let’s suppose for a moment the science were unconvincing, or at least left open the possibility of denial. What about philosophical arguments that the unborn is not a human being?

This argument is fairly ridiculous because it entails that what was not a human being 100 years ago is now suddenly, miraculously a human being due to new technologies to sustain life. In other words, it reduces humanity to a sliding scale. Imagine a nuclear fallout happened and our technology was pushed back into the 1700s era. Suddenly, viability would be much later than it currently is. Does that mean that those who were humans/persons before suddenly lost that privilege based upon our technology level?

Some argue that the ‘clump of cells’ is not a human being until it has a brain or can feel pain. There are a number of problems with this argument.

1) it assumes physicalism–it assumes that human beings are somehow identical with their brains. This is a huge area of exploration and I won’t delve into it here.

2) It is unclear how the growth of a body part somehow transforms something from a clump of cells into a human being.

3) It is a completely arbitrary cut-off. Why pick the brain as the arbitrary cutoff? Note that it has to be arbitrary unless someone has an intrinsic value to place all of the qualities of humanity in the brain.

4) If feeling pain is necessary for human life, then someone who is in a coma and can recover is not a human being. Likewise with someone who has passed or gone into shock.

5) The fact is that the unborn can feel pain at somewhere around 7-8 weeks into term. Those who deny that evidence simply must concede that evidence of pain at about 20 weeks. What does that mean? Unfortunately, abhorrently, it means that those unborn who are aborted in extremely gruesome ways [see here: warning: graphic descriptions–and I picked the least graphic one I could find] and that they feel the pain. This is an unfortunate, disturbing, fact. People who deny this fact are either blissfully unaware of the scientific literature or, to be frank, lying. So what to do with this evidence? If the reason for allowing abortion really is that the baby can’t feel pain (and I very much doubt that it is–this is just a rationalization for the real reason behind it), then any abortions over 20 weeks should be illegal.

But really, what is the rationale driving this argument? Why should we care if a “lump of cells” feels pain? After all, according to pro-choice advocates, until the unborn is somehow transformed into a baby by passing from inside to outside of the mother, the unborn is just a “ball of cells.” So really, who cares if it feels pain? Again, that’s because this reason is just a red herring. The real issue is personhood.

For a number of other philosophical arguments see my posts on my pro-life page.

The argument that the unborn is merely a clump of cells is scientifically untenable. Those who make this claim are ignorant of the scientific data that states the exact opposite is the case. If they maintain their assertions in the face of the scientific evidence, then it can only be through blind faith or willful deception.

The philosophical arguments fair no better.

From conception, a human.

*Found quoted at “When Does Human Life Begin”