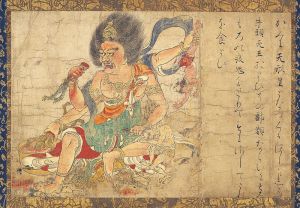 Suppose the universe has a creator. Suppose also that this being is omnipotent and omniscient. But suppose he is not maximally good. Rather, imagine that he is maximally evil. His depravity is without limit. His cruelty knows no bounds. There is no other god or gods – just this supremely wicked being. Call this the evil-god hypothesis. (Law, “The Evil God Challenge,” 4, cited below)

Now, the point of this challenge is:

the challenge of explaining why the good-god hypothesis should be considered significantly
more reasonable than the evil-god hypothesis.

Law’s primary support for this supposition is his symmetry thesis:

I shall call the suggestion that, in terms of reasonableness, there is indeed such a rough symmetry between the good-god and evil-god hypotheses, the symmetry thesis.

Now notice that the very heart of Law’s argument is something similar to this:

1) If one has no reason to believe that hypothesis a is “significantly more reasonable” than hypothesis b, one cannot rationally hold a over b

It is exactly at this point that Law’s entire epistemology must collapse into radical skepticism. Why? Simply because I can construct parallel but contradictory accounts for nearly any object of knowledge that is not a necessary truth. Just because Law is able to [unsuccessfully, in my opinion] construct a “parallel” system of explanation to that of the ‘good god’ hypothesis does not mean that his parallel is on the same level or even a challenge to that hypothesis.

To see why constructing parallel explanation of reality does not somehow undermine reality, consider two scenarios I constructed to outline this exact point.

The 5 minutes ago challenge

Scenario 1: Our universe was created 5 minutes ago with all our memories and experiences implanted into us.

Those who are familiar with epistemology and philosophy of mind will recognize this as a very pervasive scenario throughout the literature. But how does one go about solving a problem like this? Consider a defense of what seems to be everyday experience.

a) it does not seem to me as though the universe was created 5 minutes ago. I have vivid memories of ten years ago and can interact with others about some of those memories.

The problem with a), of course, is that it exactly lines up with the notion that the universe was created 5 minutes ago with our memories and experiences implanted inside our heads.

Unless I’m very much mistaken, I think I could construct a similarly parallel account for any possible defense of experience of more than 5 minutes ago.

Therefore, I conclude with Law that because the “5 minutes ago” hypothesis is has “rough symmetry” with the hypothesis that our universe is 16 billion years old and the like, it is unreasonable to embrace either proposition. After all, the 5 minutes ago thesis seems extremely improbable, and it is roughly symmetric to the ‘everyday experience’ hypothesis. Law’s symmetry principle applies and undermines all of our experience.

Scenario 2: A Cartesian Demon (again, those familiar with philosophical literature will likely recognize this one) has us all under some kind of magic Matrix-like spell where we live our whole lives in our minds even though in reality our bodies are being tortured. The demon delights in our blissful ignorance of the horrible state of our souls and so he continues to implant memories as our lives continue on.

I could continue with examples. The problem of other minds is another that immediately jumps out: how do we know there are actually minds in those walking people we see around us. They could just as easily be [philosophical, not pop-fiction] zombies walking around mechanically acting as though they have minds inside them. Again, parallels=>skepticism about whether other minds exist.

Ultimately, Law’s “symmetry thesis” leads us into radical skepticism and even solipsism. That seems to me enough to reject it.

So how exactly does Law’s evil god challenge present any difficulties for Christianity? Honestly, I’m not sure. Unless one is convinced of the solipsistic scenarios outlined above, one should not be convinced of Law’s evil god challenge. His symmetry thesis is the only way he can press this challenge, and that same thesis undermines all knowledge of experience and induction. It doesn’t seem like much of a challenge to me.

Now, one again must see exactly where this is leading. Suppose, as a theist, I find the evidence for the existence of a god to be very convincing. Suppose further that I find the theodicies Law parodies to be sound. Suppose that I think that Law’s evil god hypothesis meets these theodicies equally. Now, according to Law, I am in the state of “symmetry”; I have no reason to prefer the good god over the evil. Law maintains that this means not just that I can’t rationally hold to either, but rather that because the evil god hypothesis is “very unreasonable indeed” I should also reject the good god.

But of course the theist we are supposing to exist believes that the good good hypothesis is extraordinarily reasonable. And because Law’s thesis works, according to them, following Law, they have no reason to believe the evil god is any less probable than the good god. Thus, according to this theist, the evil god hypothesis is not improbable but rather extraordinarily probable.

What Law has done is pretty simple. He’s argued that the good and evil gods must be on the same level of rationality. Because he (apparently) and others reject the evil god out-of-hand, he argues that they are on equal footing and so one should reject the good god. But again, what if the theist agrees that these hypotheses must be on equal footing and that it’s not that both are improbable but rather that both are extraordinarily probable?

All Law has said in response to such a person is that the evil god is “very unreasonable indeed” but why? Law has just spent over 20 pages arguing that the evil god is actually reasonable. Suddenly, the evil god is worthy of rejecting a priori? How does that work out? Law hasn’t done anything to dissuade the convinced believer. The only way his argument works is if one thinks that the good god hypothesis is barely rational. If one follows his conclusion and thinks god’s existence is very likely, then they must follow it all the way through: the evil god’s existence is very likely too. Law just imports this unreasonableness from his own a priori denial of the existence of God.

So what, at this point, does the believer do? Well, it seems we’re back to my first point. One can either believe the symmetry thesis and thus devolve into radical skepticism, or one can reject it and thus throw Law’s argument out the window where it belongs.

Finally, it’s worth noting that there are other reasons to reject the “evil god challenge.” First, it doesn’t take into account the whole range of theistic argument. For example, the ontological argument is based upon the notion of God as maximally great. Law would have to argue that an evil being could be maximally great. Good luck.

William Lane Craig and Stephen Law debated some time back. I wrote a review summarizing and analyzing the arguments.

Glenn Andrew Peoples presents Law with a formidable challenge on the Unbelievable? Podcast.

Edward Feser weighs in on the evil God challenge.

Max Andrews weighs in, arguing that even though Law’s argument is much like the Cartesian demon, we should take it seriously.

Luke Nix at Faithful Thinker comments on the same argument from a different angle.