Faith is Belief without Evidence? Origen contra Boghossian (and others) 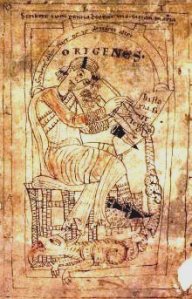 Peter Boghossian is perhaps most famous for his work A Manual for Creating Atheists. In this work, he argues that believers–and Christians specifically–see faith as belief without evidence or “pretending to know what you don’t know” (Manual… [Durham, NC: Pitschstone Publishing, 2013]), 7ff. Many atheists throughout time have pushed a redefinition of faith, claiming that Christians believe without or against evidence.

Origen (ca.184-253), one of the most prolific early Christian writers, was also one of the first to offer a defense of Christianity. In his work Contra Celsusm (available for .99 in Origen’s works), in which he answered a skeptical Greek interlocutor,  Ceslus, Origen began Chapter X of Book I with words that may seem to demonstrate the notion that faith is belief without evidence:

[W]e must say that, considering it as a useful thing for the multitude, we admit that we teach those men to believe without reasons, who are unable to abandon all other employments, and give themselves to an examination of arguments…

Before the party gets started however, the rest of this chapter from Origen is well-worth considering. Indeed, Origen argued that all positions require belief without reasons, and continues the above quotation directly: “and our opponents, although they do not acknowledge it, yet practically do the same.” Origen, in other words, alleged that both Christians and non-Christians must believe, in some cases, without evidence or reasons. Why? He explained:

For who is there that, on betaking himself to the study of philosophy, and throwing himself into the ranks of some sect, either by chance, or because he is provided with a teacher of that school, adopts such a course for any other reason, except that he believes his particular sect to be superior to any other? For, not waiting to hear the arguments of all the other philosophers, and of all the different sects, and the reasons for condemning one system and for supporting another, he in this way elects to become a stoic, eg., or a Platonist… or a follower of some other school, and is thus borne, although they will not admit it, by a kind of irrational impulse to the [selected] practice…. to the disregard of the others…

Origen, then, notes that humans are prone to jumping on board with whatever philosophy they first sign up with. Whether that is Christianity or militant atheism, we tend to explore that which we find familiar. Moreover, we approach rival philosophies with bias. Any philosophical position, argued Origen here, is one that we accept to some extent without evidence. After all, no one really can examine every rival belief and find that one’s own is the only one that is reasonable. Rather, we must accept that we have the relevant information at hand and move forward on that information.

Origen’s argument flies in the face of skeptics like Boghossian. Rather than accepting a definition of faith as belief without evidence, Origen notes that all belief systems have elements that are held without evidence. We seek self-confirmation. We often find it. Origen doesn’t leave it there however, through the rest of the book, he answers many objections to Christianity that persist to this day. Christianity, Origen argues, is reasonable and stands against the objections people bring against it.

Origen is one of the greatest thinkers in the history of Christianity. In one of his works, Contra Celsum (available in an excellent Kindle edition of his works), he replies to the skeptic, Celsus, who charged Christians with effectively dismissing sin and inviting the unrighteous into Christianity instead of the righteous. Origen replied in Book III, Chapter LXI:

Not to participate in mysteries, then, and to fellowship in the wisdom hidden in a mystery, which God ordained before the world to the glory of His saints, do we invite the wicked, and the thief, and the housebreaker, and the prisoner, and the committer of sacrilege, and the plunderer of the dead, and all those others whom Celsus may enumerate in his exaggerating style, but such as these we invite to be healed.

Origen’s point is that Christianity is a religion that does call sinners of all varieties, but it does not call them to a kind of “free pass”- it calls them to the healing that can only be had through the washing by the Lord Jesus Christ.

On Christian Music– I wrote a post about the label “Christian music” and how that can lead to a number of difficulties with discernment.

Christian Discernment Regarding Music: A Reflection and Response– I reflect in depth on how we can use our discernment properly when it comes to music.