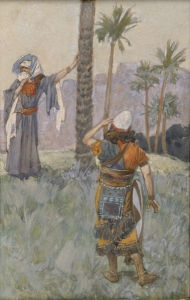 It’s another week and I’m here to bring you some more great reading for your weekend. Be sure to let the authors know what you think, and let me know here as well. Topics for this week include the Grand Canyon and the biblical Flood, Deborah as leader, Jehovah’s Witnesses, and more!

Deborah and the “no available men” argument– A refutation of the notion that Deborah was only chosen to lead Israel because there were “no available men” who could or would do so. Unfortunately, this argument is fairly common among those who do not wish to affirm the Bible’s teaching on women’s equal leadership.

The Grand Canyon’s Magnificent Witness to Earth’s History– Often, young earth creationists argue that the Grand Canyon can only be explained (or at least is better explained) by the biblical Flood as a global flood. A new book is challenging that perception. Check out this post to learn more.

Calamity (The Reckoners)– Superheroes and villains face off with those who seek vengeance against those villains who destroyed their world. Check out this look at worldview issues in Brandon Sanderson’s latest Young Adult novel, Calamity. Also check out my own reflection on the book. 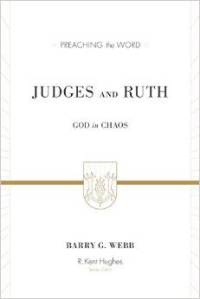 Barry Webb’s commentary, Judges and Ruth: God in Chaos is part of the “preaching the word” series and presents the books in a pastoral, conversational fashion.

Webb continually brings up details of the text that are overlooked, bringing to light wonderful insights where people may tend to skip over. Minor judges (like Shamgar) are at times given as much detailed discussion as those we might consider more important. There is a clear method to this, as Webb seems uninterested in sharing those things readers learned and re-learned since Sunday School. This is a book that feels fresh and exciting–and I’ve read one of Webb’s other commentaries on Judges!

These insights are not limited to the minor judges, however. The sections on Gideon, Ehud, and Samson (one of my favorite Bible personages) are particularly excellent. Each will make readers look with more depth even at stories they think they knew. For example, regarding Eglon, the king Ehud kills, Webb points out that readers of the story should reflect on the interplay between Ehud’s bringing a harvest tribute and the corpulence of Eglon. The fatness of Eglon is, ironically, in part due to his gleaning food from Israel! It is just this kind of deep look at the text that can be found throughout the book, time and again, regarding the judges and Ruth.

The tone of the book is quite pastoral. There are no sections of Hebrew painstakingly pored over word-by-word. Admittedly, I love that kind of commentary. That’s not the kind of commentary this is. Instead, it is presented in a kind of conversational style that takes you directly to the story. A good word to describe the style is “immersive”: reading the commentary makes one feel as though they are inside the Bible story themselves, experiencing it, and seeing the world anew as the contemporaries might have. It is a pretty thrilling experience.

The section on Deborah as a “maverick” is unfortunate, because it undercuts the importance of the woman Deborah (though calling her a “maverick” seems on-point). Webb has written elsewhere (his commentary in the New International Commentary on the Old Testament Series on Judges) about how “there is no hint in the narrative or elsewhere in Scripture that her [Deborah’s] exercise of such a role [as leader/judge/prophetess] was contrary to God’s purposes, or a breach of his declared will in the way that the irregular worship practices of the period were” (Webb, The Book of Judges,  (Eerdman’s, 2012) 188). Here, however, Webb qualifies this endorsement, carefully pointing to a pattern of male leadership throughout the Old Testament and arguing that Deborah is exceptional in her role here as prophetess/Judge. Yet in the same chapter, he also notes how the Old Testament is a patriarchal culture, which makes Deborah’s function as judge/prophetess even more exceptional! The exceptional nature, however, is not that it is improper–as Webb himself admits–but rather that her acting in this function, a prophetess called by God, challenges the very patriarchy that Webb has noted (and, at times, challenged himself) as the background for Old Testament practices. That is, Deborah functions as an attack on that paradigm, not a confirmation of it.

Though Webb notes that Deborah was praised in her function, he nowhere points out how this very act of praising Deborah for her role as leader and prophetess of Israel entails a theological truth of the gifting of God for women in such positions. I was disappointed to see this subtle shift in Webb’s affirmations about Deborah from his other commentary. This makes the section on Deborah less insightful than it could have been, however, particularly given her importance in the book of Judges.

Judges and Ruth: God in Chaos is a beautiful, pastoral book full of insights that will have you scrambling to grab your Bible and make notes. Although it isn’t perfect, it is a worthwhile read that will open the pages of the books covered in new ways. It is recommended.

Disclaimer: I received a copy of the book for review from the publisher. I was not required to provide any specific kind of feedback whatsoever.

Microview: “The Dominant Culture: Living in the Promised Land” by Martin Murphy

is an introductory exposition of the book of Judges in the Bible. Judges is my favorite book of the Bible for a number of reasons, but mostly for the people. Samson was my most loved story when I was a child–it was like a real-life superhero. Deborah has grown to be a story of great importance for me as it demonstrates a woman in the role of leader and prophet over the people of Israel. Gideon is another exciting story with all sorts of action. The cycle of Judges also draws interest by being mirrored in our own lives as we experience sin, consequence, cry for help/repentance, and deliverance.

Murphy’s book brings much of the book to life as he retells the stories with an eye for application in the present day. How do Israel’s stories point to truths in our own lives? The book proceeds effectively through the major stories of Judges, with a few comments on minor stories as well. The beauty of the way Murphy does this is that he doesn’t try to make a kind of direct correspondence between the nation of Israel as theocracy and our own world in a kind of one-to-one correspondence; rather, he draws from the stories of Judges to show how we live in a world in which each goes his/her own way, sin reigns, and we need repentance. These and other applications are drawn throughout the book with rather remarkable insight.

There are some downsides in the book, particularly with the marked reading of gender hierarchy into the narrative of Deborah. Here, it seems, Murphy goes off track of what is otherwise marvelous exegetical skill, as he must continually appeal to silence (by saying things like the Bible never says God approved of Deborah as a prophetess) rather than allowing the text itself to demonstrate that Deborah simply was a leader and prophet. The very fact that the author of Judges does not condemn a woman as a prophet and judge when they are quick to condemn other wicked practices (such as using the refrain of “everyone did as they pleased”) in fact seems to point in the opposite direction as that which Murphy goes regarding Deborah. This is, thankfully, just one unfortunate aberration of exegesis among what is otherwise a quite solid job navigating between the need to stay true to the text and draw out applications for today.

-Unfortunate comments about Deborah and women in leadership

is a solid introduction that ties the book of Judges in to our own era. It does so remarkably well without falling into the possible errors of only going for current relevance or making direct 1-to-1 connections between Israel and a country like the United States. If one can get past a few specifics of doctrinal stances that take away from the general appeal of the work (in particular the discussion of Deborah and women in leadership), it provides a good introduction to and application of Judges.

I was provided with a copy of the book for review. I was not obligated by the publisher to write any type of review whatsoever.