Bible Note: Judges 15:1-3 and the right for vengeance

As I’m working through the Bible writing a kind of running commentary on it as I go, I continually encounter depths of the material I hadn’t encountered before. One such place is the Samson narrative–one of my favorite stories in the entire Bible. The following is an extended version of one of the notes I put in my running commentary:

In Judges 15:3, having discovered his wife was given to someone else, Samson notes that “this time” he has the right to take vengeance. What does this mean? Is Samson saying that he has a right ‘this time’ as opposed to last (when he took vengeance because of the Philistines getting the answer to his riddle through his wife)? Or does he mean that he has a right ‘this time’ in addition to the last time?

Added dimension: In 14:19 when he strikes down 30 Philistines he does so in the power of the Spirit of the LORD. Further dimension: 14:4 speaks of how the LORD was seeking to confront the Philistines.

It seems to me this must imply that God, in sovereignty, is guiding the events towards an end God desires. Given this, we may be tempted to say Samson’s right is indeed a right to vengeance–a divinely given one. But it is possible God is also using this (clearly) sinful man in spite of the sinfulness of his behavior, including his desire for vengeance (which belongs to God alone).

Which interpretation do you think is correct? Why?

Sunday Quote!- Is God in Control of Disasters? 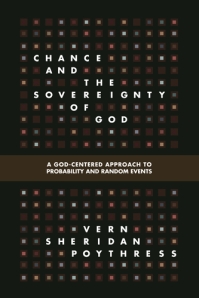 Is God in Control of Disasters?

I’ve been reading through Chance and the Sovereignty of God

by Vern Poythress recently and I’m really interested in the topic. It’s one I have considered for a PhD thesis so I was really interested to dig in and see what Poythress had to say (I have reviewed the book here). One interesting part was Poythress’ comments on disasters and sovereignty:

The main alternative is to say that God is not thoroughly in control. It says that some disasters “just happen,” apart from God’s control. This alternative is superficially attractive, because it appears to protect the goodness of God… further reflection shows that it is not satisfying–in fact it is spiritually devastating… If God is in control… we have a consolation such as the Bible provides… that God is able to bring good out of evil.

…[W]hat if we say that God is not in control of the disaster? God might still do something good in the response. But the disaster itself is still out of control, and inherently unredeemable. There is no comfort to be had for it. We are left with fear for the future. (Kindle location 738, cited below)

What do you think? When a disaster strikes, like Hurricane Katrina, it is inevitable that some will stand up and say it was God’s judgment on a town. Others quote Jesus’ words in Luke 13:1-5 and say that these disasters come seemingly at random. Are these mutually exclusive claims? What are your thoughts on Poythress’ comments: do they show that it is better to say God is in control than not?

Book Review: “Chance and the Sovereignty of God” by Vern Poythress– Check out my review of this interesting book about chance and God’s control over all events.

Vern Poythress, Chance and the Sovereignty of God: A God-Centered Approach to Probability and Random Events (Wheaton, IL: Crossway, 2014).

Book Review: “Chance and the Sovereignty of God” by Vern Poythress

When I saw the title  Chance and the Sovereignty of God: A God-Centered Approach to Probability and Random Events, I pounced on the opportunity to review it. This is a topic I’ve been considering for doctoral work so I was extremely excited to dive in.

The book starts off well, with discussions on the nature of chance and exploration of the biblical material for anything dealing with seemingly random events. Poythress ably shows that the Bible clearly presents God as in control of all these events. Numerous verses suggest that God is in control over “all” events, while verses which explicitly mention seemingly random or chance occurrences also attribute such events to divine knowledge and control. Poythress’ look into these topics is detailed and broad. He addresses the weather, random events like the toss of a die, human free choices, the life and death of the smallest creature or plant, and even gambling! These things are all argued to be ultimately, biblically under the sovereignty of God.

Another area the book excels in is the discussion of chance in rival worldviews. Any view which denies the centrality of God is one which suppresses the knowledge of God (Romans 1). Poythress notes that this means that “chance” may become a God-substitute. Chance is seen as being not only the explanation of events but their actual cause:

People are implying that [Chance] has the power to bring about events… The word chance first gets associated with events that we as humans cannot predict or explain… Then, in a second step… [Chance] becomes a label that we offer as the new explanation for the unpredictable event… We say “Chance brought it about”… (Kindle Location 1707)

Chance as an explanation, Poythress argues, is ultimately empty. For chance is substituted to become whatever we cannot predict or explain, and is then used itself as the explanation. I found Poythress’ comments here interesting and very insightful. His application of this concept to other worldviews later in the book makes it worth the read for these sections alone.

One difficulty with the book is the question of audience. At times, the discussion of probability theory becomes complex and very scholarly, but the earlier sections of the book speak broadly and with words that seem aimed more at a general readership. This mixture of technical and general writing makes it hard to pinpoint the audience. Who is supposed to read this book? What is it supposed to be used for?

Another problem I saw in the book is the lack of thorough argumentation for many points. No complaint of this nature may be lodged against the book’s discussion of probability theory, which is well fleshed-out. But on God’s relation to probability theory and how that relates back to sovereignty, there are often only a few sentences at a time to make a claim about the nature of the interrelationship. For example, throughout Section IV on “Probability and Mathematics,” there are lengthy discussions of probability theory with passages on how it relates back to God seemingly tacked on throughout. Near the beginning of this section, one sample is representative:

Both of these [mathematical] principles [discussed above] have their foundations in God… The separations within this world have their ultimate foundation in the distinction among the persons of the Trinity… The unity and diversity in outcomes rest… on the original pattern of unity and diversity in God. God has caused the creation to reflect his glory and wisdom. (Kindle Location 3346)

Poythress does make some earlier references to this argument, but it just never seems to be fully established and surely a statement about mathematical separations for probability in the world being a reflection of distinction among persons in the Trinity may cause some skepticism. It is a point which begs for more argumentation than was dedicated to it here. Where Poythress does address it (Chapter 11), we find more detail to the arguments, but even more questions left unanswered. For example, granting that God is revealed in all things which are made, why think that a sequence of flipping coins is explicitly a revelation of the Trinity instead of simply a revelation of God’s imbuing the universe with order and regularity so that seemingly random events are possible? But Poythress takes it as the former–a revelation of the Trinity–without so much as a comment on alternative possibilities.

Perhaps more problematic is that Poythress never seems to tackle the broader implications of his biblical argumentation. Yes, he put much work into showing God is sovereign over the weather, chance events, free will, and the like. But I kept thinking, “And now what?” What does it mean to say God is in control over natural disasters? What does it mean to say that the roll of dice I make in a game of Risk, for example, is controlled by God? What are the implications of the biblical data Poythress has set before me? Topics like these are taken up at points, only to be quickly set aside by a paragraph or even just a sentence or two.

Overall, Chance and the Sovereignty of God is an interesting look at an oft-neglected topic, but its scope is too broad and its argumentation at times too vague to be helpful. On biblical issues Poythress has offered much to consider. His outline of probability theory is helpful but technical. What I found after reading the book is that I continued to hope for a more detailed discussion on how sovereignty would interlink with chance. Yes, the book makes it plain that God has sovereignty over seemingly random events, but exactly how does that work? What does that mean for everyday life? At times these topics are taken up, only to be set down after but a few sentences. At times helpful and stunningly insightful, at other times frustratingly vague and broad, it’s a book that will leave you longing for more.

Vern Poythress, Chance and the Sovereignty of God: A God-Centered Approach to Probability and Random Events (Wheaton, IL: Crossway, 2014).

Disclaimer: I received a review copy of the book through Crossway. I was not obligated by the publisher to give any specific type of feedback whatsoever.