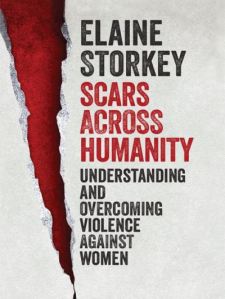 Warning: Some statistics related to domestic violence and sexual violence are discussed in this post.

[T]he… acts of violence to women aged between 15 and 44 across the globe produce more death, disability and mutilation than cancer, malaria, and traffic accidents combined (2).

Every three seconds a girl under the age of 18 is married somewhere across the world-usually without her consent and sometimes to a much older man (49).

Nearly 200 million women and girls worldwide are living with the traumatic consequences of female genital mutilation (30).

It is an alarming picture of mass termination: prenatal offspring, aborted for no other reason than they happen to be female (19).

There are some nonfiction books that have made me sit back upon finishing reading them, wondering about the world we live in, because the book has given me new eyes to see. Scars Across Humanity has become one of those books. Though I was aware of, broadly, some of the statistics of violence against women, I had no idea how completely pervasive it is at all stages of life. Nor did I fully comprehend or appreciate how totally violence against women has penetrated every level of nearly every society on Earth. Though the #MeToo and #ChurchToo movements have highlighted some of these issues, Storkey gets to the meat of the issue, giving enormous amounts of statistics and serious analysis of the totality of this horrific situation.

The bulk of Scars Across Humanity focuses on statistics and specifics. First, Storkey shows that violence against women is a “global pandemic.” There is no part of the world that is untouched by this blight upon humanity. Then, several chapters go over specific instances of violence against women. Abortion is the first level of violence against women. Sex-selective abortions are almost entirely chosen to kill unborn girls. This, in turn, fuels human trafficking as women are moved into those parts of the world where a serious imbalance of adult men and women exists, largely due to sex-selective abortions. Female genital mutilation is opposed by leaders of all major faiths, yet it continues across the world and cases of it in places like England and the United States are on the rise. Early and forced marriage is another global problem. Indeed, in the United States, very few restrictions exist on girls being married off to men–indeed, 20 states have no minimum age of marriage.

The misnomer of “honor” killings continue in some parts of the world and, where it is outlawed, enforcement is incredibly lax. Women are murdered or disfigured for the sake of male notions of “honor.” Domestic violence exists in the home and a stigma surrounds it such that it is underreported. Women are at the highest risk when they attempt to leave an abuser, and as many, many instances have shown, they are often not believed when accusations of abuse are made. To help stop the wave of violence in the home, we must work to end stigmas surrounding those who have been harmed by domestic partners, work with law enforcement agencies, and change laws as needed to provide for the greatest possible protection of those towards whom violence is directed. Human trafficking and prostitution are closely tied together and even in those areas where prostitution is made into “just another job,” evidence suggests that massive increases in trafficking occur. Rape is a worldwide epidemic and Storkey shows clear instances of how “rape culture” is a real thing that women must deal with when they report this sexual violence. A huge part of ending rape is to educate men and punish them where they perpetrate these vicious acts. War almost inevitably leads to sexual violence, as can be seen in the historical record as well as into today. Rape is sometimes even used as a weapon of genocide in cultural warfare. Women, time and again, are seen as pawns in conflicts and power dynamics of men.

By the end of Storkey’s analysis, I was left wondering whether there was any room for hope. Storkey does offer a few points, sometimes highlighting how laws have changed to help fight violence against women (though often noting alongside this the serious lack of enforcement of those same laws). However, it is in the last few chapters that Storkey offers her broader vision of overcoming violence against women. Largely, this includes working both internationally and locally (with specific guidelines and stories of how this has worked) to create and enforce laws and to spread and teach the Christian theology of the equality of all humanity.

From before women are born to their all-too-often violent deaths, women across the planet are attacked in often brutal ways. Scars Across Humanity shines a light upon this darkness and issues a serious, empowering call to end this horror of violence against women. If we are truly serious about men and women being made in the image of God, we must fight this gender-based violence on a global level. Storkey’s book is highly recommended.

Really Recommended Posts 10/30/15- What do you know about Domestic Abuse?, apologetics, and more!

Another week, another round of enjoyable reads for you, dear readers. It is Domestic Violence  Awareness Month, so I’ve shared a double-feature of posts that work to dispel myths about domestic violence. How many of these myths have you heard or held onto? Other posts include the fine-tuning argument, apologetics in the Bible, fossilized burrows, and the strangeness of the Bible. Check them out, and let me know what you think.

Ten Myths About Domestic Abuse You Didn’t Know You Believed – Part 1 – I found this post enlightening about some of the perceptions related to domestic abuse we often absorb without realizing it. I think everyone should read this post to get an idea of some of the difficulties around speaking about domestic abuse. This post has the first 5 myths. Don’t forget to check out Part 2 as well.

The Fine-Tuning Argument (Video)– A video which outlines and explains the argument for the existence of God from fine-tuning. I think this is a sound argument well-worth knowing.

Fossilized Animal Burrows in Argentina from the Triassic Period– If the Flood is supposed to explain the overwhelming majority of sedimentary layers on Earth, how do Flood Geologists explain animal burrows? This post presses home the challenge.

Parents, Please Don’t Forget How Strange the Bible Is– If we don’t take the whole word of God seriously, it will be hard for our children to do so. We need to be aware of the sometimes strange aspects of the Bible and be prepared to answer our kids’ questions about them.

I am pleased to present this wide range of topics to you, dear readers! I hope you enjoy the reads as much as I did. We have posts on the origins of the Gospels from an atheistic perspective, domestic abuse, the ontological argument, soft tissue in dinosaurs, and Bill Nye on abortion. Let me know what you think, and be sure to thank the authors as well!

Where the Gospels Came From– This is a satirical post that highlights how broad swaths of internet atheism tend to view the origin of the Gospels. It’s well worth reading as it highlights some of the major errors.

When Staying in an Abusive Relationship is Part of Your Theology– It is Domestic Violence Awareness Month, and this post from Christians for Biblical Equality highlights one major difficulty with some theologies- they argue that one should stay in an abusive relationship from theological reasons.

The Probability of God’s Existence is Either 0% or 100% (video)– Kenneth Keathley offers this analysis and presentation of Alvin Plantinga’s ontological argument. He defines terms and answers some major objections, with the objections offered by atheists themselves.

“Soft Tissue” Found in Dinosaur Bones– Creationists sometimes claim that the finds of “soft tissue” undermine the possibility for an old earth perspective. Is that the case? Here is some analysis of this claim and some more recent findings regarding allegations of blood and other soft tissue found in ancient fossils.

Responding to Bill Nye’s Abortion Video– Bill Nye “The Science Guy” made a lot of claims about science and abortion in a video recently. Here’s a thorough analysis and refutation of his claims.