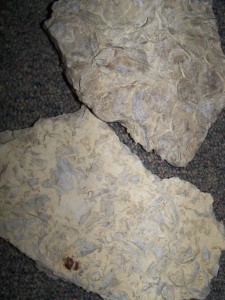 I have gone all over the internet to bring you these Really Recommended Posts for your weekend reading. As always, be sure to let the authors know what you think, and let me know as well.

Wyoming Fossils: Coming to Grips with the Absurdity of the Flood Geology Model of Fossil Origins– The sheer amount of fossils we can observe and their arrangement leads to some serious difficulties with young earth creationism and its scenarios of the Flood. (The picture of fossils here is from my private collection. The pictured fossils were found in Kansas, not Wyoming.)

The Two Guys to Blame for the Myth of Constant Warfare Between Religion and Science– Some historical perspective on the idea that science and religion are at war with each other.

Dalrymple Responds to Gibbon Concerning the Spread of Christianity– “The History of the Decline and Fall of the Roman Empire” is one of the best known works of history in the West. Edward Gibbon, the author, was an urbane skeptic who used the work to aim skeptical arguments at Christianity. One of his contemporaries fired back.

The latest round of Really Recommended Posts is in, dear readers, and is it a good batch, or what? We have a few posts on Crossway’s announcement of the “Permanent Text” of the ESV, a post addressing the claim that Jesus was a false prophet, insight into one of the earliest Christian apologists, and controversy over a citation of a scientist in regards to creationism. As always, let me know your thoughts.

The ESV: The New Inspired Version– A tongue-in-cheek look at the announcement of the “Permanent” ESV and the kind of reasoning it seems like is behind it.

A Permanent Text of the ESV Bible? They Must Be Joking– A more straightforward critique noting several difficulties with the concept of a permanent text or a “literal word-for-word” translation.

The New Stealth Translation: ESV– A post with some more in-depth look at specific aspects of the ESV changed in this “Permanent” text.

Was Jesus Really a False Prophet?– Thorough analysis of the argument that some have made that Jesus was, in fact, a false prophet.

A Crash Course on Irenaeus– Irenaeus offered one of the earliest defenses of the Christian faith. Check out this post with a wonderful infographic to learn the basics on Irenaeus.

Another go-round the internet has turned up a number of links for you, dear reader, to peruse. Here, we discuss 1 Timothy 2:12-a central verse in the debate over women in the church, liberal theology, Psalms, cults, and “feminization” of the church. Check them out, and let me know what you think in the comments below. Be sure to leave them comments as well, as comments are what make we bloggers keep blogging!

NIV, ESV, and 1 Timothy 2:12– 1 Timothy 2:12 is often seen as the central verse for the complementarian position. After all, it teaches women are not to have authority over men, doesn’t it? Here, Paul Adams shares some insights from Craig Blomberg about some difficulties with translating the verse in a complementarian light, and the way this reflects in different Bible versions.

What is Liberal Theology?– I’d say it’s one of those “scare phrases” intended to throw people away from the teachings of theologians or systems which the one using the phrase wants readers to avoid. Check out this post which analyzes the term via words from Roger Olson.

Sure Signs of a Sinister Sect (COMIC)- Here, No Apologies Allowed shares a cartoon about how to perhaps identify some less-than-sound teaching and the methods of various cultic groups.

The “Feminization” of the Church– Recently, I wrote about how many I have read have complained about this alleged “feminization” of the church. Here, the origins of this belief are assessed alongside various studies and quotes from leading approaches to the issue.