I’m pleased to offer this go-round of the Really Recommended Posts to you, dear readers. I think they are about as diverse as you can get. We have Stephen Colbert on his faith, illegal immigration and Christianity, apologetics, Jesus’ view of Scripture, and Planned Parenthood on the docket today. Check them out and let me know what you thought!

Watch Stephen Colbert, a Lifelong Catholic, on Hearing a Female Priest Celebrate the Eucharist– I don’t put a lot of stock in celebrity comments about faith or politics or really anything. After all, they don’t automatically become authorities simply because they are famous. However, Colbert’s faith is quite sincere, and this whole interview is worth watching. Here’s a clip in which he talks about a female priest celebrating the Eucharist.

Apologetics Strategies: The Myth of a Bulletproof Argument– It is easy to think that, regarding Christian apologetics, we can come up with an argument that will convince everyone. Is that the case? Here’s a post on apologetic method that is well worth your time.

Jesus Viewed Scripture as Inerrant: A Reply to Kyle Roberts– A few weeks ago I featured an article arguing all Christians should view the Bible as inerrant. Here is a follow-up post in which Rob Bowman takes an extended look at Jesus’ view of Scripture. 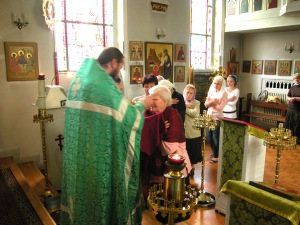 Sam Harris recently debated William Lane Craig on the topic “Is Good from God?” See my comments on the debate here. During the debate, Harris argued that the rituals of Christianity can be seen as a kind of lunacy. Harris said, “[Religion] allows perfectly decent and sane people  to believe by the billions what only lunatics could believe on their own. If you wake up tomorrow morning thinking that saying a few Latin words over your pancakes is going to turn them into the body of Elvis Presley, you have lost your mind. But if you think more or less the same thing about a cracker and the body of Jesus, you’re just a Catholic.”

Consider what Harris is claiming here. Basically, he’s saying that to believe a cracker becomes the body of Jesus is a kind of lunacy. Interestingly, throughout the debate he issued these veiled (or not so veiled) insults to Christians at large, and quickly retreated from them when he was called out. But that’s neither here nor there.

But perhaps I’m missing Harris’ point. Perhaps he is instead trying to say “Look at what you guys do! It’s crazy if it’s something else!” But again the only way this would make sense is by assuming Christianity is false. If I believe Christianity is true, then I have no reason to think the rituals involved therein are lunacy or anything other than perfectly rational worship of our God.

But it could be pressed that it does seem as though Harris’ assertion that Holy Communion would be viewed as lunacy in other contexts is in some sense correct. For were I to do the same with pancakes and Elvis, I would be seen as a lunatic. Why not the Christian too? Well, then the question would have to be what kind of evidence do we have for thinking Christianity is true as opposed to other beliefs? In short, if the Christian is epistemically justified in believing Christianity to be true, then Harris’ argument is exposed for what it is: a facile argument which shows how deeply Harris and the other “New Atheists” fail to understand the position they attack.