Sunday Quote!- Bonhoeffer on the Abuse of Grace 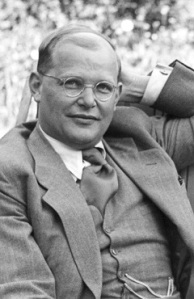 The Abuse of Grace

The life of a Christian is not easy, and many pitfalls remain in our path as we walk along the narrow way. One difficulty that is particularly acute is the problem of falling into taking grace for granted. Dietrich Bonhoeffer, a Lutheran minister martyred by the Nazis in World War II, has powerful words about this:

Is there a more diabolical abuse of grace than to sin and rely on the grace which God has given? (52, cited below)

As Christians, we need always be aware of the danger of thinking we can sin freely because of God’s grace. Bonhoeffer was of course aware of Luther’s oft-abused and taken out of context phrase, “Sin Boldly.” He commented:

For Luther, “sin boldly” could only be his very last refuge, the consolation for one whose attempts to follow Christ had taught him that he can never become sinless, who in his fear of sin despairs of the grace of God. (ibid)

Knowing that God is graceful, we can be confident that our stumbles will not condemn us; however, we must always be wary lest we begin to blaspheme against God’s grace by taking it for granted. Bonhoeffer’s work, The Cost of Discipleship, is as powerful as ever. I suggest you read it.

Molinism is a topic hotly debated in theological circles. There have been several books on the topic published just in the past few years, which, for a topic of analytic theology, is extraordinary. Kenneth Keathley’s work, Salvation and Sovereignty: A Molinist Approach

focuses on the theological usefulness of molinism.

The contrast is laid out in detail through the book, but to sum up, Keathley provides a comparison in the introduction. Radical depravity allows for free will while still emphasizing the fallen nature of people. Overcoming grace emphasizes “God’s beckoning that overcomes our wicked obstinacy” (3-4); sovereign election is the affirmation that God desires salvation of all; eternal life is to note that believers “enjoy a transformed life that is preserved and we are given a faith which will remain” (4); finally, singular redemption emphasizes that Christ’s atonement is not limited to the elect (4).

Keathley seeks to wed these concepts of salvation and sovereignty with the analytic theological concept of molinism. Molinism, Keathley argues, is a “middle way between Calvinism and Arminianism” (7). Molinists can affirm that God controls all things, that “man does not contribute to his salvation,” that the believer is eternally secure in Christ; further, they can affirm that “God is not the author of sin” that “God desires the salvation of all,” and that “At crucial times, humans have the ability to choose” (7).

Next, the Biblical account is expounded. Before going into depth with individual verses, Keathley argues that the Bible teaches that God exhaustively knows all things (including the future), that God is holy and righteous and does not cause sin, and that humans do have freedom–contingent choices are placed before people (20). Keathley then turns to exegetical studies of various aspects of God’s knowledge and human freedom. First, he argues that God has exhaustive knowledge of all things (including the future),  meticulous providential control, freedom, and righteousness (20ff). He then turns to a defense of the notion of human freedom in the Bible through a study of “contingent choices” put before people. He draws on both Old and New Testament examples to make his case. [In the interest of length I’ll not go through these arguments, but I would like to note that he utilizes over 30 separate verses in the first two pages of the Biblical evidence sections alone.]

The second chapter covers a side topic: Does God desire salvation for all people? Here, Keathley outlines 4 major positions regarding this. First, there is universalism–all are saved; second, there is double predestination–God chooses who will be saved and who will be reprobate; third, God has two wills–a revealed will in which God desires salvation and a decretive will in which, for unknown reasons, He passes over some; fourth, God has a consequent and antecedent will–“God antecedently desires that all be saved, but He consequently wills that faith is a condition to salvation” (42-43).  Keathley argues that the fourth option is the most defensible (43ff).

Next, Keathley turns his work towards a specific defense of the “ROSES” position discussed above. This defense encompasses the rest of the book.

Radical depravity is a rejection of determinism along with an affirmation that humans are in bondage to sin and fallen (63). Keathley endoreses “soft libertarianism,” which affirms that people’s characters can determine the range of choices, but also that they are the “origin and source of their choices” and that they are genuinely free to reject or choose specific actions (70ff).

Overcoming grace holds that while grace is monergistic–God is the only worker in salvation, it is resistible. “God’s grace is truly offered and available. The difference between the saved and the lost is the continued rebellion of the unbeliever” (105). This is an “ambulatory” model, which basically means that God is drawing all people to Him at all times, such that the only way to not be saved is to resist belief in Him.

Keathley holds “sovereign election” in which “God ordains the salvation of the elect but only permits the damnation of the reprobate” (142). Keathley follows this chapter with “Eternal Life” in which he argues that believers can feel certainty about their salvation. Finally, “Singular Redemption” is the notion that “redemption is provided for all, but applied only to those who believe” (194). This reflects the “penal substitutionary atonement” view (ibid). Thus, God provides salvation to all who believe, and applies it to those who do.

Salvation and Sovereignty is not unique simply because of its emphasis on the theological utility of molinism. The book is also written at a level that general readership will find accessible. Considering the extreme nuances and significant philosophical groundwork which must go into an explication of molinism, Keathley does a simply phenomenal job making the concept accessible to readers who are not philosophically trained.

However, it should be noted that because of this simplification, several of the philosophical issues related to molinism drop off. Not only that, but it seems that Keathley is operating under very slightly different views of what molinism entails. For example he states that molinism is a kind of “compatibilism” (5). This is false for most molinists, because most molinists defend libertarian freedom in conjunction with God’s foreknowledge. Thus, it is not compatibilism but libertarianism. Finally, many philosophical objections to molinism are left untouched. Due to the focus of the book, however, these seem minor flaws for the overall work.

Keathley’s work is exciting in many ways. It brings the molinist discussion to a more general readership. It provides a significant challenge to theological determinism. Finally, and perhaps most interestingly, it provides an account which shows the theological fruitfulness of the concept of middle knowledge. Readers interested in any of these topics should immediately get the book and read it. For those who have engaged with molinism on a philosophically developed level, it provides an interesting account of how to apply those studies to a theological framework. For those who know little or nothing about molinism, it provides an excellent introduction. While readers may not agree with all of Keathley’s theological positions, his work will challenge and inform anyone who reads it. It comes highly recommended.