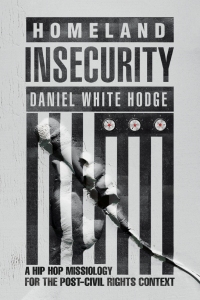 Daniel White Hodge’s Homeland Insecurity: A Hip Hop Missiology for the Post-Civil Rights Context is much more than a book about missions, though it has plenty there. It challenges readers to broaden perspectives, think critically about their own assumptions, and engage with cultures they may not have otherwise done.

The book starts off with an exploration of Christianity and “the theological turn of the twentieth century.” This theological turn was, in part, a moving away from seeing Christianity as a kind of turning everyone into white people with ways of thinking and culture. After World War II, there was a questioning of authority and the structures that were set in place to maintain authority that began to be challenged. But missiology hasn’t kept up with all the trends. As communities of black people began to be formed outside the church in the Post Soul context, these communities relied less upon the church, which then attempted outreach, turning it again, unfortunately, into a viewpoint where the dominant white culture and hierarchy became enshrined as part of the church and, therefore, of the mission preached to the community.

Throughout this first section, we see how racism in the church and the accompanying silencing of the voices of people of color led to multiple challenges in the American church. As people began to associate the church with oppression, they began to see Christ and orthodox Christianity as inherently wound up in the same systems. Opposition to doctrines that were taught by missionaries who seemed to care much more for the numbers they could draw than for the people or empowerment of the oppressed became part of the experience of many people of color. Hodge, here, shows through both anecdotes and broader analysis that this opposition to orthodoxy in some sections of the church arose from opposition to those associated with the orthodoxy. And here’s where the book begins to truly challenge its readers. After all, I personally cannot say how often I’ve heard about how much it is ideas that matter rather than the people who put the ideas forward. Objective truth, that is, is true no matter who shares it. I believe that. But when the people who share objective truth are actively oppressing you and preventing, sometimes by force, family members from doing things like voting, it becomes difficult to see where the lines should be drawn between the objective truths and the objective lies and distortions being put forward by the same individuals or groups of people.

There is a kind of blithe assumption that we–all people, that is–can just separate whatever someone believes or teaches from the person. Truth is supposed to be impersonal, and so it doesn’t matter if the one who is teaching the Gospel is a Klansman, because it still is the true Gospel. Objectively, that is true, but the message it sends is that the Gospel is associated with the Klan, whether we want it to be or no. That means the challenges faced by missiology must include not just teaching objective truths, but demonstrating that these objective truths are capable of objectively changing reality for both the one sharing the truths and for those who hear them. And that is exactly what the Gospel of Christ is about, for it ushers in salvation through the Kingdom of God. Hodge’s book continues to challenge readers throughout. Nowhere does he say that heresy is good or that it should be accepted, but he does call readers to see how heresy might become appealing when orthodoxy is associated with structures that oppress.

Hodge weaves data and anecdotes throughout the book. The segments from interviews are particularly poignant, as readers learn about young people of color who faced challenges of racism even in their small Christian groups. One example I remember is of a large black man who did his best to be cheerful, funny, and self-deprecating in order to come off as non-threatening to his church community only to have that community doubt his reports of aggression from police and white people outside that community purely based on his status as a large black man.

Then, Hodge turns to Hip Hop and an analysis of some major works in that genre to see how they’ve helped shape the thought and even theology of communities. Though often dismissed offhand as sinful due to content including cuss words, sex, violence, and drugs, hip hop is one way that people are trying to make sense of the world. But the analysis of Hip Hop isn’t an attempt to excuse its content; rather, it is a demonstration of the power of that content for communities experiencing that content and a call to develop missiology that acknowledges this context. It shows how Hip Hop has its own missiology and theology, deeply spiritual and often developed out of a Christian context and background.

Homeland Insecurity: A Hip Hop Missiology for the Post-Civil Rights Context is a challenging, fulfilling read. It’s a call to readers to go beyond the straightforward and look, truly look at the way we impact our communities. Moreover, it is a call to action. I highly recommend it.

I just started reading popular hip-hop star Lecrae’s biography, Unashamed. What makes Lecrae notable is the combination of his success in the music industry, specifically through rap/hip-hop, along with his unwavering commitment to his faith in Jesus Christ.

Lecrae notes one of the difficulties with labeling music as “Christian” music:

Being an outspoken Christian in the music industry means always feeling out of place…
This is one of the reasons I don’t fully embrace the “Christian rapper” label. It isn’t that I’m ashamed of being a Christian. I’m not… But labeling the music that way creates hurdles and is loaded down with baggage. Plus, it isn’t a true expression of the music I’m making. I try to produce music that is life-giving and inspires people to hope… I want to address themes that people who aren’t Christian can appreciate. (6-7, cited below)

He tells a few stories about how this label has actually hindered the impact his music can have on the world. Is it possible that by using the label “Christian music” we may be doing more harm than good? How might Christians make music that speaks to a world thirsting for truth?

Lecrae’s autobiography has already forced me to think deeply about a number of issues. Unashamed is recommended reading, though I note I haven’t finished it yet.

On Christian Music– I wrote a post about the label “Christian music” and how that can lead to a number of difficulties with discernment.

Christian Discernment Regarding Music: A Reflection and Response– I reflect in depth on how we can use our discernment properly when it comes to music.