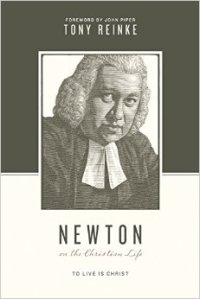 On Theological Controversies- From John Newton

I recently finished reading Newton on the Christian Life (see my review here), a book about John Newton’s pastoral theology. John Newton worked on slave ships but after his conversion worked to help end slavery in the British Empire. His pastoral theology had great depth, as evidenced in this quote on theological controversies, published in a newspaper during a particularly bitter debate between Arminians and Calvinists:

[B]efore you engage in debate, you must take heed of your opponent. He is an eternal creature. If he is not a Christian… he warrants your deepest pity, kindness, and prayers… If, however, your theological opponent is a genuine Christian, think about your future together in heaven.” (Kindle Location 5460, cited below)

Think about that for a moment. Your “debate opponent” will be together with you in heaven forever. This isn’t someone you can hide comfortably from behind a keyboard. You’ll meet one way or another. How do you think you should treat this child of God?

But that’s not all. Newton’s advice applies even moreso if the debate is against someone who is not a Christian, for they “warrant… your deepest pity, kindness, and prayers.” What kind of Christians are we if our theological debates drive people away from Christ (another theme in Newton’s pastoral theology)?

We should keep in mind Newton’s advice as we engage others; all of whom bear the image of God.

Sunday Quote!- We Influence Toward… or Away From Christ

We Influence Toward… or Away From Christ

I read through Newton on the Christian Life by Tony Reinke recently (see my review). Before I go any further, I would note this is John Newton and not Isaac Newton. John Newton is the man who wrote Amazing Grace, but his life and influence go well beyond that. Reinke notes that, according to John Newton, we have vast influence even in our everyday interactions with others:

Newton has some insights of his own on how we might best lead towards Christ, and this largely centers around the maturing life of a Christian and trying to live as Christ, for “to live is Christ.”

How is it that our actions are influencing others toward or away from Christ? How might we best live our lives in ways that lead to Christ rather than driving people away from Him? In what ways can we, through the Spirit, live as Christ to the world?

Newton on the Christian Life presents the theology of John Newton (more on that later) in light of Christian living. Central to Newton’s theology is the notion that “to live is Christ.” We as Christians are to continually rely upon Christ in all things.

The book has only parts of Newton’s biographical information found throughout the various chapters, but there is enough there to get a picture of the mighty fall the man had and the depths from which God plucked him. Here is the man who wrote the hymn “Amazing Grace” and who was friend of such prominent persons as William Wilberforce, yet who had worked on a slave ship and taken place in the vulgarities thereof. It is truly a story of grace, but Reinke emphasizes throughout the book Newton’s own commitment to “to live is Christ.”

The concept of living as Christ or “being Christ” is central to the book, which highlights again and again. Newton’s belief in, description of, and application of this concept are each drawn out in detail. Admittedly, this emphasis became a little overmuch by the end of the book as it seemed some themes were touched on over and over. However, there are many other insightful points throughout the book which are intertwined with Newton’s emphasis.

For example, the chapter on “Christian blemishes” utilizes examples of how we might live our life as Christians in ways which are largely commendable, but which lend themselves to certain sins. Another chapter highlights the effects of indwelling sin from Newton’s perspective (himself a Calvinist) and applies this to the Christian life. The chapters on spiritual weariness and battling insecurity are extremely pastoral and applicable in their content and tone and, I think highly valuable. Yet another deeply insightful section was chapter 9, which speaks about how trials in our lives can be used as spiritual discipline. Finally, the section on “Victory Over Mr. Self” that spoke of theological controversies had profound insights into how we should treat others with whom we disagree. I should note that I’m a Lutheran and at no point felt that I was not getting value for my time out of this book, despite Newton’s own strong Calvinism. I would say that anyone could benefit hugely from these chapters.

There is a wealth of firsthand quotations from Newton himself in the book, which makes it well worth engaging for that purpose alone. The pastoral tone and care that Newton had shines through in these quotations and Reinke himself does an excellent job summarizing points in a way that lends itself to the same tone as the man about whom he is writing.

One critique may be my own obtuseness coming through, but I think it’s worth mentioning. When I first got the book I saw some guy with a wig on the cover and thought–reasonably enough, I think–that “Newton” probably referred to Isaac Newton. It wasn’t long into the book before I was disillusioned, but I think that although it might make sense to leave books in the series consistent, given that not everyone may immediately think of John Newton instead of Isaac Newton, it might have been a better choice to include first names across the board. I asked a few friends who they thought the book was about based on the cover or title and every single one said Isaac Newton. It’s not a substantial critique, but I think it was worth a mention.

Another criticism I have is that there is virtually no use of women as examples in the discussions. Much of this is because Newton himself did not use women as examples in his letters and Reinke worked closely with Newton’s own writings. However, it would have been nice to have some counter-balancing examples to show that women struggle with the same problems. Here and there this is brought out in a letter, but it is very rare and noticeably so.

Newton on the Christian Life is an excellent read worthy of a thorough study. The examples he used can be applied in all kinds of pastoral contexts, and the emphasis on life in Christ is commendable. Moreover, the last several chapters are completely full of deeply impactful and applicable insights into the Christian life. The book comes highly recommended.

Disclaimer: I was provided with a review copy of the book from the publisher. I was not asked to give any specific kind of feedback whatsoever.

Luther on the Christian Life by Carl Trueman– I review another book in this series, this one focusing on Martin Luther.