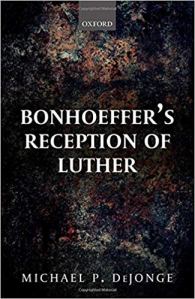 Michael P. DeJonge’s thesis in Bonhoeffer’s Reception of Luther may be summed up as saying the best interpretative framework for understanding Dietrich Bonhoeffer’s theology and thought is by understanding him as a Lutheran theologian specifically engaged in Luther’s thought.

DeJonge supports his thesis primarily through two strands of evidence: first, by showing Bonhoeffer’s close readings of and interactions with Luther; and second, by demonstrating that Bonhoeffer’s perspective on important controversies was a Lutheran perspective.

Bonhoeffer’s interactions with Luther outpace his interactions with any other theologian. DeJonge cites a statistic: Bonhoeffer cites or quotes Luther 870 times, “almost always approvingly”; “The next most frequently cited theologian is a distant second, Karl Barth with fewer than three hundred” (1). This alone may serve to demonstrate Bonhoeffer’s concern for interacting with Luther, but DeJonge goes on to note that Bonhoeffer also strove to correct competing interpretations of Luther, and affirm specifically Lutheran doctrine. For instance, in his interactions with Karl Holl, one of his teachers, he goes against Holl’s interpretation of Luther’s view of religion, arguing that Luther’s Christology saves one from idolatry of the conscience, which he felt Holl may have slipped into. Bonhoeffer also affirmed the emphasis on Christ’s “is” statements when it came to the Lord’s Supper, defending the position that “this is my body” means Christ is truly present in the Supper (70ff).

DeJonge’s argument expands to a demonstration that Bonhoeffer aligned with a Lutheran understanding on important issues. The Lord’s Supper has already been noted, but it is worth pointing out that in regards to this, Bonhoeffer explicitly sided with Luther against Karl Barth and the Reformed tradition, which argued that the finite could not contain the infinite. Instead, Bonhoeffer affirmed that, by virtue of the infinite, the infinite could be contained in the finite; allowing for a Lutheran understanding of real presence in the Supper. Another major controversy DeJonge notes is that of the interpretation of Luther’s “Two Kingdoms.” DeJonge argues that Bonhoeffer has been misunderstood as rejecting Luther’s doctrine in part because Luther’s doctrine itself is misunderstood. Thus, DeJonge engages in a lengthy section in which he traces the influence of Troelsch on the understanding of Luther’s Two Kingdoms and how often it is Troelsch’s understanding rather than Luther’s that is seen as “the” doctrine of the Two Kingdoms. Going against this, Bonhoeffer’s thoughts on the Two Kingdoms are closer to Luther’s position than many have argued.

DeJonge also interacts with other interpretations of Bonhoeffer, such as an understanding of Bonhoeffer as a pacifist, which has been a common understanding among some. Utilizing his deep analysis of the Two Kingdoms doctrine, DeJonge counters that Bonhoeffer’s comments about resisting the Nazis align with this doctrine much more closely than they do to a pacifist understanding. Like Stephen R. Haynes’s The Battle for Bonhoeffer, DeJonge notes that Bonhoeffer’s resistance cannot be linked explicitly to the Nazi treatment of the Jews. Though it is clear that Bonhoeffer detested this treatment, DeJonge argues he did so not through a broadly humanitarian theology (going against some interpreters here), but rather due to his understanding, again, of the Two Kingdoms. When the Nazis sought to attack the Jews, particularly by separating them from the so-called German Christians, they issued a direct assault on the body of Christ–the church. Thus, Bonhoeffer’s resistance to these ideals, again, springs from a Lutheran understanding of the Two Kingdoms. (As an aside, it is worth nothing DeJonge also acknowledges the contributions some aspects of Martin Luther’s own writings had to the Nazi ideology. However, DeJonge here shows how Bonhoeffer’s understanding of his theology set him against these anti-Semitic notions.)

Finally, DeJonge demonstrates that Bonhoeffer’s view of justification–certainly a vastly important doctrine for Luther and Lutherans–ought to be properly understood as Lutheran rather than anything else. Time and again, throughout the book, DeJonge carefully demonstrates how an interpretation of Bonhoeffer suffers when not understood in a Lutheran lens. Over and over, readings of Bonhoeffer that make sense in one context are shown to fail when compared to the whole of his writings. DeJonge also manages to offer a coherent account of Bonhoeffer’s theology that does not set an “early Bonhoeffer” against a “late Bonhoeffer” nor does it read the whole of his thought through any one work. As such, DeJonge offers a truly compelling reading of the totality of Bonhoeffer’s work.