Really Recommended Posts 5/13/16- full quivers, the man who refused to salute, and were you there?

I hope you won’t mind a somewhat shortened Really Recommended Posts this week. I had to make them brief for several reasons. First, I am taking a class on historical writings in regards to special divine action. It is wonderful. Second, these are super high-quality links so you should read them all instead of skipping a couple. Third, I’m tired and I’ve been sick. As always, let me know what you think, and be sure to let the authors know as well.

The German Non-Saluter Myth– I think this is a pretty cool story about the man in the photograph that heads this post. He is largely (and, it seems probably legendarily) believed to be a man who directly experienced much oppression at the hands of the Nazis. However, it seems that closer investigation (with comparison of family photos) suggests it was simply a pious Protestant who refused to bow the knee, as it were. Yet the “boring” story of the latter possibility has its own power: the power of faith over tyranny.

Quiver full speech crashes airplanes– The notion that a certain class of people ought to be deferred to rather than challenged is common. Here is a post that analyzes the frequent complementarian assertion that men ought not be challenged in their authority by women and applies the same idea to pilots and copilots. This isn’t just an ivory tower thought experiment–real stories are brought forward, and it turns out it doesn’t seem to work very well.

Were You There?– A common challenge issued from young earth creationists is to ask scientists and other believers: “Were you there?” It’s intended to score rhetorical points, showing that someone can’t really know that the world is quite ancient when they weren’t there themselves. Here’s a post addressing this common challenge.

Book Review: “Why It Doesn’t Matter What You Believe If It’s Not True” by Stephen McAndrew 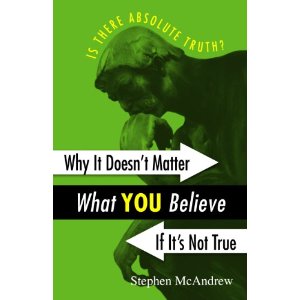 Is there absolute truth? Such is the topic of Stephen McAndrew’s new book, Why It Doesn’t Matter What You Believe If It’s Not True (hereafter DMYB).

McAndrew begins the work by noting that his book is an examination of a position and an affirmation of absolute truth. This is done because it is important to “examine even the most comfortable beliefs and leave standing only those that survive the disciplined assault of reason” (9).

He begins this testing by exploring some philosophical background, from Plato to positivism to relativism. These summaries are succinct, but provide a great background for those who haven’t read much on the topic. He turns next to a discussion of the effects of an abandonment of absolute truth. Relativism divorces one from any capacity to judge right and wrong. McAndrew notes, “These actions [such as the holocaust, racism, etc.] may brutally offend our sense of right and wrong, but the moral relativist cannot apply his or her values to others” (27).

What is interesting, however, is that McAndrew doesn’t stop at discussing relativism alone, but rather a conjunction of two beliefs: relativism and universal human rights. Many people, McAndrew notes, hold to relativism but also want to affirm universal human rights. In DMYB, he uses the discussion of the Nuremberg Tribunals–at which Nazis were tried for war crimes–as a case study for these conflicting views. He notes that “The defendants at Nuremberg argued that international law could only punish states and not individuals…. The Nuremberg court held that individuals could be punished for crimes against humanity under international law” (34).

Relativists, however, cannot consistently agree with the Nuremberg court, because “If there are no absolute truths, there can be no universal human rights” (35). These rights, if relative, are “contingent upon our cultural and historical position…” (ibid).

But relativism has a worse problem–it is contradictory. If all truth is contingent, then the statement “All truth is relative” is also relative, and therefore cannot be true for all people in all places (43ff). McAndrew next turns to the source for the “human rights urge”–the notion that all humans have certain universal rights. This source, argues McAndrew, is God (62ff). He makes a final case study when he turns to art–if there is no absolute truth, then there is no enduring beauty or truth in art (77ff).

Overall, the book may not convince everyone that there is absolute truth, but it will certainly force them to think about the positions they hold and wonder whether they can consistently cling to a relative absolutism. Those who already own a few books on the topic may wonder whether it is worth adding to their collection. Simply put, yes it is, if only to have at hand some great specific examples and talking points to discuss with relativists. It’s also a quick read that can be handed out to friends to  open up the path for future discussion. I highly recommend DMYB.

Stephen McAndrew, Why It Doesn’t Matter What You Believe If It’s Not True (Sisters, OR: Deep River, 2012).

Disclaimer: I was provided a review copy of this book by the author. My thanks to Stephen for the opportunity to review his book.