Peace and Violence in the Ethics of Dietrich Bonhoeffer

Book Review: “Peace and Violence in the Ethics of Dietrich Bonhoeffer” by Trey Palmisano 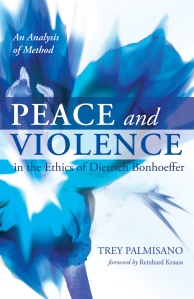 The question of Bonhoeffer’s views on pacifism and related issues like just war or tyrannicide is one that has been controversial almost since the beginning of Bonhoeffer scholarship. Trey Palmisano argues in Peace and Violence in the Ethics of Dietrich Bonhoeffer that such questions are needlessly reductionistic. Instead, Palmisano suggests that instead taking seriously Bonhoeffer’s own claim of consistency means we need to read him in light of how peace and violence might intermix or even be called for in different situations.

After a brief introduction including a timeline of Bonhoeffer’s life, Palmisano begins with a survey of major influences on Bonhoeffer’s thought. Martin Luther’s influence can’t be understated, and Palmisano thankfully notes the distinct impact Luther had on Bonhoeffer, a Lutheran pastor. Specifically, Luther’s impact on Bonhoeffer’s sacramental theology as well as the Lutheran doctrine of the Two Kingdoms are highlighted here. Regarding the latter, Palmisano reflects more nuance than several other writers, noting that Bonhoeffer did not reject Two Kingdoms theology as many have suggested. Instead, Bonhoeffer saw the Nazi attempt to separate public and private life, and the success they had in foisting this false dichotomy on the German Christian church, as a threat to sound doctrine. Instead, Bonhoeffer accepted a separation between church and state while rejecting the Reich’s attempts to subordinate the church, particularly to racial injustice. Other thinkers who influenced Bonhoeffer surveyed are Kierkegaard, Nietzsche, Reinhold Seeberg, and Barth.

The next chapter looks at Bonhoeffer’s ethical method. This is Palmisano’s central contribution to Bonhoeffer scholarship and ties into the other chapters. First, he notes that Bonhoeffer faced questions of individuality vs. community; formal and material cause and effect, and a world-church relationship that was fracturing in new and challenging ways with the threat from the Nazis. He surveys other ethical systems, noting where Bonhoeffer may reflect them while also going beyond or against them. For example, regarding deontological ethics, it is clear that Bonhoeffer felt it failed to adequately account for abstraction in ethical questions. More plausible for impacts on Bonhoeffer are situational ethics–something that largely developed after him in philosophical circles–and a kind of utilitarianism. But neither of these captures what Bonhoeffer thought for ethical grounding. After this survey of different views, Palmisano goes over Bonhoeffer’s own ethical development through his early career and into late in his life. Then, Bonhoeffer’s Christology is clearly central to his thought, and this continues throughout his career. Palmisano argues that it is this Christological grounding in ethics that makes it possible to see the individual and other as dual grounds for ethical relationships, with Christ as the central, objective grounds. Thus, Bonhoeffer’s ethic has an objective criterion in Christ while largely being capable of contextual/subjective application of moral norms. Revelation, for Bonhoeffer, in the form of Christ, is to encounter oneself and reshape one’s ethical standards and boundaries (51-52; 53ff). The way this plays out in the real world–something that was particularly concerning to Bonhoeffer–is that “Obedience understood as the dutiful observance of commandments is never simple because too many moving parts exist… obedience… is oriented to a relationship with Christ…” and this relationship with Christ ultimately yields an almost “creative” ethical stance in which questions are approached on an individual basis following the question of who Christ is for us and for the other (64-65).

The third chapter explores Bonhoeffer’s “Quest for Peace” and argues that Bonhoeffer did not “discover” pacifism in New York, but rather had experiences that brought those ideas to the forefront (see, for example, 78ff). Drawing from Discipleship, Palmisano notes that for Bonhoeffer violence has no place in the gospel message (90) while also nuancing it as a contextual ethical response to relationship (91). Bonhoeffer’s own responses to those in military service as well as to questions of war show a more complex response than a perfect pacifism. Thus, Palmisano concludes that Bonhoeffer’s alleged pacifism is instead “bound to a dynamic notion of ethical relationship through which its very expression was subject to change…” Moreover, “Bonhoeffer’s pacifism is situationally diffuse, located at one and the same time in both the sacred and the secular…” (106).

We especially see this contextuality in Bonhoeffer’s response to the question of murder. Palmisano uses this stronger word because Bonhoeffer does not himself put words like tyrannicide in between himself and the question of killing, and one which Bonhoeffer saw as guilt-laden regardless (120, note 36). The question of killing Hitler, then, is able to be located not in an outside perspective of tyrannicide and the ethical justification thereof, but rather within Bonhoeffer’s own strands of thought and ethical method (125ff). Thus, for Bonhoeffer, taking on sin and guilt for the sake of the other is itself capable of being sanctified, or, at least, forgiven through the “deep waters of relationship with Christ” (143).

Peace and Violence in the Ethics of Dietrich Bonhoeffer offers a bold, refreshing interpretation of Bonhoeffer in regards to the ethics involved in pacifism, just war, and murder/tyrannicide. The greatest strength is that Palmisano is able to offer a cohesive account of Bonhoeffer’s ethics, rather than chopping his thought into distinct and sometimes opposed periods. Moreover, he is able to ground it (thought not explicitly) in the concept of Lutheran thinking and development of those doctrines. He thus offers a compelling, and, to my mind, convincing way of reading Bonhoeffer on pacifism and related questions. Very highly recommended.