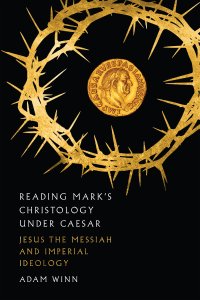 Reading Mark’s Christology Under Caesar by Adam Winn makes the convincing argument that Mark’s Christology is largely a counter to the cult that grew up around Emperor worship in Rome. Accompanying this argument is a fantastic array of contextual evidence both from the text and from references to other ancient works about Rome and her emperors.

After an informative introduction, Winn begins his argument with a look at the cultural context of Mark and an extended analysis of the cultic practices and beliefs centered around Caesar. Emperor Vespasian was pushing his victory over Jerusalem and destruction of the temple in theological motifs, and these were seen as a major challenge, particularly to Roman Christians, to the Messiahship of Jesus Christ. Winn then argues that Mark, therefore, with his use of Christological titles, prophecies of Christ, and discussions of the Temple acts as a direct counter to Vespasian’s claims.

For Mark, Jesus is both powerful and suffering, and this shows Christians that not only is he triumphant and victorious, but also one who is willing to humble himself and lay down his life for his Kingdom. This is a direct contrast and attack on the Vespasian propaganda that made the Emperor into the ideal citizen and conqueror. By being willing to suffer and die, Jesus demonstrates his superiority over Caesar as leader and shepherd of his people.

I am personally no expert in the subject material, so it is difficult for me to judge exactly how on target Winn may be in the book. So far as I can tell, his argument is quite compelling. The appendix included at the end was welcome, noting that those who argue that Mark has a high Christology are not thwarted by the argument in the book. The thesis that Mark is writing against the Caesar cult is an independent question from how high his Christology truly is. I found Winn’s analysis fascinating and convincing, though I’d be interested in seeing what those who are less amenable to his thesis may have to say. It’s the kind of work that is sure to spur further discussion and research.

Reading Mark’s Christology Under Caesar was a book that surprised me. I had seen some making comparisons between Caesar and Christ before, but never had I seen it integrated so fully into the reading of a book of the Bible. It is a fascinating book and I recommend it.