The Doubled Life of Dietrich Bonhoeffer 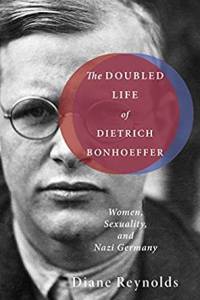 …Bonhoeffer reflects a prewar–what we might call a pre-postmodern–consciousness, a consciousness that no longer fully exists. We view him anachronistically, through our different set of lenses, and thus he shatters or refracts, like an abstract painting, into a dozen disparate images because he doesn’t fit conventional postwar paradigms. He remains, in some sense, untranslatable. (3)

Diane Reynolds’ The Doubled Life of Dietrich Bonhoeffer offers a unique take on the life of that great German WW2 theologian, Dietrich Bonhoeffer. Her biography focuses largely on two topics: the women in Bonhoeffer’s life and questions of sexuality in both his theology and life. The book is a biography, then, that fills in a number of holes that are left by other biographies. It doesn’t provide an exhaustive look at where Bonhoeffer was at any given time in his life like Bethge’s biography, nor does it provide a broad overview while filling in theological details like the excellent work by Ferdinand Schlingensiepen. Its focus is even narrower than the interesting Strange Glory by Charles Marsh. Yet it is that narrowness of focus that allows Reynolds’ biography to stand out from among these other excellent works and show he areas that they missed.

Reynolds’ controversial theories about Bonhoeffer’s sexuality (see below) would likely be the biggest takeaway many have from the book, which is unfortunate because it is quite excellent in several other regards as well, no matter what one thinks of her arguments over his sexuality. Specifically, her emphasis on bringing women’s voices in Bonhoeffer’s life to the forefront offsets a rather lengthy time in which women have largely been ignored or set to the side when considering his theology and life. Reynolds aptly demonstrates women were absolutely central to his way of thinking and clearly shaped his thought and direction of his theology in a number of ways. Indeed, his inner circle towards the time of his death was made up of women (Sabine, his twin sister; Ruth von Kleist-Retzlow; and his fiancée, Maria von Wedemeyer) and Bethge. Though Bonhoeffer was raised with somewhat traditional German values, he rebelled against the Nazi insistence on ideals of women and men in utterly separate spheres of thought and took advice from several women regarding his theology. It would be impossible to paint Bonhoeffer as entirely egalitarian, but not outside of reality to see the way that he lived in an effectively egalitarian understanding while remaining in his traditions.

The most controversial aspect of Reynolds’ biography is that she takes Marsh’s hints about Bonhoeffer’s sexuality and states “I will openly argue… that Bonhoeffer went beyond emotional friendship with Bethge and was in love with him–and that Bonhoeffer’s fiancee knew it” (7). Indeed, Reynolds even goes so far as to argue that there are “seeds of a nascent queer theology in Bonhoeffer’s writing” (7). Regarding Bonhoeffer’s being in love with Bethge, it is true that Bethge himself left open the question of Bonhoeffer’s sexuality. Reynolds’ evidence for her strong claim starts with that, but continues by noting the specific language Bonhoeffer used of and to Bethge, which parallels some of that used by homosexuals in Germany at the time. Moreover, a mutual acquaintance of Bethge and Bonhoeffer (Gerhard Vibrans) used words for their special relationship that were “codes used for gay relationships in Weimar Germany” (141). Maria von Wedemeyer, Dietrich’s fiancée, seemed to question his feelings for her at multiple points in their letters back and forth, forcing the latter to reassure her that his feelings were genuine on multiple occasions. A final piece of evidence Reynolds notes is absences or excisions from letters to and from Bonhoeffer that seem to cluster around questions of sexuality. As she puts it, “We also have unexplained ellipses in at least one [of] the letters to Eberhard [Bethge], a censoring of texts deemed too ‘intimate’ to share” (429). Bonhoeffer’s engagement to von Wedemeyer is explained, in Reynolds view, by both an attempt to thwart Nazi suspicion (Bonhoeffer would have been seen as more “normal” if he were married) and as a kind of cover for Bonhoeffer’s sexuality.

If all of this seems a bit circumstantial, that would be because at least some of it is. Certainly, when taken altogether,  the evidence rings of the possibility of Bonhoeffer having an attraction that goes beyond friendship for Bethge. The intimacy of his letters and exhortations to his friend to spend more time with him, the latter’s apparent moves to thwart the same intimacy, the excision of letters, the language used by mutual acquaintances, and the tepid relationship between Bonhoeffer and his fiancée may all be taken as evidence for Reynolds’ thesis. But her claim is quite strong, not just that there may have been something going on, but that their relationship went beyond friendship and that Bonhoeffer was explicitly in love with Bethge, with von Wedemeyer’s knowledge (7). Alternative explanations could be given for each of these lines of evidence Reynolds’ presents. Bonhoeffer’s apparently cold feelings towards von Wedemeyer could be explained simply by his seeing their relationship as a way to thwart the Nazi investigation; excisions in the letters could simply be quite personal rather than anything related to sexuality; a friend’s knowing taunts could be reduced to jealous teasing at being excluded from the same fraternal intimacy; and the like. The question, of course, is whether such explanations are better than those offered by Reynolds. As it stands, readers must judge for themselves. I do not think Reynolds’ strong thesis can be carried by the weight of her evidence. Insinuations are there, but nothing strong enough to conclude as she does with such certainty.

Regarding Reynolds’ claims for a “nascent queer theology,” I do not find the evidence convincing. Essentially, she turns his writings on friendship into thoughts on how homosexual relationships could be viewed with the same legitimacy as those of male-female ones. For example, she writes, “Both Bonhoeffer and Bethge acknowledged struggles due to the lack of formal recognition of their close companionship… Both men felt the frustration of the military’s indifference to their friendship. These sorts of assertions against invisibility have become the mainstay of the gay marriage movement… insisting on the beauty, necessity, and value of same-sex friendship existing as a cornflower between the rigid rows of more formal social organization offered a beginning vision” 419-420. But there seems to me a vast difference between two friends frustrated over not being able to communicate as they wished to and insisting that that is the formation of a theology of same-sex relationships that affirms marriage. We must be careful not to subsume same-sex friendship into same-sex attraction, and close friendships ought not to lead necessarily to speculations about sexuality. It seems to me that Reynolds’ thesis is once again stronger than the evidence supports.

None of these comments should be taken to suggest Reynolds is not careful in her survey of the evidence. Indeed, she provides correctives to some aspects of Bonhoeffer’s life as well, including on some things that could be seen to support her thesis had she let them stand. For example, she offers a brief comment in which she criticizes Charles Marsh for his “effete” Bonhoeffer, arguing that his style of dress was “from pride in his appearance rather than a ‘flamboyant abbot’ quality” (17). By contrast, Reynolds notes that Bonhoeffer would have been considered “masculine” in his own time. Reynolds here demonstrates that she is not grasping at straws to try to push a pet theory. Rather, her analysis of Bonhoeffer’s life is balanced and challenging.

Another aspect of this biography worth noting is its own. Reynolds’ writing style captures the reader and draws one into the narrative of Bonhoeffer’s life in a way that few biographies are able to grasp. The biography, again, necessarily misses large portions of Bonhoeffer’s life because of its different focus. But in having its focus upon aspects of his life that have been overlooked, Reynolds manages to make a compelling narrative that challenges readers to interact with it, possibly re-evaluating assumptions about Bonhoeffer’s life and theology in the process.

The Doubled Life of Dietrich Bonhoeffer is a fascinating work. It explores aspects of Bonhoeffer’s life that have largely received little treatment in the works on his life. Though I believe some of Reynolds’ theses are stronger than she was able to support with the evidence, it certainly got me thinking about the life of Bonhoeffer more deeply than I had before. Her demonstration of the impact of women on his life is a refreshing breath of air, showing the influence women had on his life and theology. Those interested in a deep exploration of Bonhoeffer’s life would do well to read this book, whether they agree or disagree with Reynolds’ ultimate conclusions. I recommend it.