“The Monuments Men” – An Apologetic of Culture 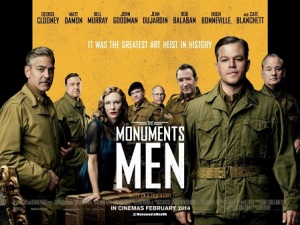 “The Monuments Men” is a film based on a true story of a group of soldiers sent to salvage cultural artifacts from destruction by the Nazis. Here, we’ll analyze the film from a worldview perspective. There will be SPOILERS in what follows.

One question the film puts front and center is this: “Of what value is art?”

The question is put in a number of poignant ways, such as a moving scene in which Donald Jeffries is killed in an effort to protect Michelangelo’s Madonna and Child. The scene is powerful because Jeffries finds his value in his efforts to defend and preserve this beautiful art. He writes a letter to his father about the value of defense of such a work of art, which is overlaid with the imagery of him being killed by a Nazi officer.

Claire Simone works against the Nazis to try to protect and preserve the ownership of art. Her recognition of the importance of these pieces of history to those who collected them is a recognition of the power of the human mind to transcend the mundane.

The power of art to shape humanity, or even become a monument to humans–a way to transcend–is front and center throughout the film. The question that is then begged is this: if the natural world is all which exists, whence the transcendence? Where or to what might the transcendence point?

History is important aspect of human life. Long have various cultures held notions that if one’s name were erased from historical record, it was as if one never had existed. The driving force to be remembered is a powerful one in human life, but perhaps it is also something which drives us towards art.

By collecting the art and stealing the works from their rightful owners, the Nazis were essentially attempting to rewrite history and capture the cultural past of those who owned or produced the art. There is a powerful message behind this of the need to be aware of how history is shaped by even those who are writing it.

How is it that humans recognize the value of art, or, more abstractly, of beauty? Some would allege that it is merely something we assign to things. The value is entirely a construct. In some ways that seems true, but there is something inherent in the notion that beauty–that art–is something which it is a great evil to destroy or take from someone else. Beauty is in the eye of the beholder, but it is also something which points beyond itself, to the transcendent.

The very possibility for recognizing that which is beautiful itself cries out for explanation. Whence the need for, dedication to, and recognition of beauty? A Christian would point beyond these towards God. Without the actual existence of the transcendent, there is little possibility for explaining the capacity for humans to reach out and grasp it.

“The Monuments Men” is a very solid flick to explore from worldview perspectives. It’s not as action-packed as most war movies, but it is more thoughtful and because of that it is in many ways more compelling. Perhaps most interestingly, it offers a view of the arts as something concrete, to be appreciated, and perhaps even transcendent.

Here, I have compiled a kind of special edition of the “Really Recommended Posts.” We first focus on a number of critical responses to the first episode of “Cosmos: A Spacetime Odyssey.” It seems to me the episode did some pretty shoddy history and also made any number of metaphysical claims. After that, we look at some more extremely interesting posts which focus on educating children in the faith, literature as a way to discover meaning, and the film “The Monuments Men.” As always, I’d love to read your thoughts on these posts.

Cosmos, Giordano Bruno, and Getting it Right– A brief but incisive critique of a number of major historical errors made throughout the first episode.

Cosmos with Neil deGrasse Tyson: Same Old Product, Bright New Packaging-  In this post, Casey Luskin takes on the notion that science and religion are at war alongside some other errors in the episode.

Is there any science in the new “Cosmos” series, or is it all naturalistic religion?– Wintery Knight takes on the episode for making a bunch of claims without evidence.

Cosmos Revives the Scientific Martyr Myth of Giordano Bruno– “[T]he materialist bias of the producers, editors, and writers of Cosmos is so complete that they couldn’t be bothered even to check Wikipedia.” Yep. Check out this incisive critique of the way Bruno was presented in the episode.

Cosmos: Episode I Recap and Review– I give an overview of the episode and critique it for making rather poor metaphysical and historical assertions instead of presenting more observational evidence.

The Number One Sign Your Kids Are Just Borrowing Your Faith– Natasha Crain shares some interesting thoughts on how to better develop the faith of your children. Here, she looks into the possibility that your kids may just be borrowing your faith.

Be Careful What You Read… C.S. Lewis’ literary encounter with George MacDonald– The ways in which literature can shape one’s thoughts are astounding. Here, the impact of literature on C.S. Lewis’ conversion is explored.

The Monuments Men: A dialectic not to be ignored– The film “The Monuments Men” has rather mediocre reviews overall. However, Max Andrews over at Sententias points out that the film’s emphasis on the importance of identifying and preserving art and beauty may hint at greater things. Check out his interesting thoughts on the topic.