the Star of Bethlehem

Sunday Quote!- The Quest for the Star of Bethlehem 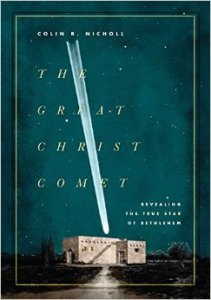 The Quest for the Star of Bethlehem

I was excited to dive into The Great Christ Comet by Colin Nicholl. Not only is it seasonally appropriate as a read for Advent, but it also is a topic that I believe has much untapped theological and apologetic value. The topic has surely captured the popular imagination, as many renditions and references can attest to. There are many different lines of theological and astronomy that Nicholl draws on to make his point, however the biblical narrative, he argues, ought to be central to the quest for the Star of Bethlehem:

It should surely go without saying that any quest for the historical Star must be built firmly on the foundation of a rigorous analysis of Matthew 1:18-2:18. Only when this text has been mastered and the profile of the Star fully laid out can one realistically hope to deduce the precise astronomical phenomenon in view. (Kindle Location 563)

Nicholl does an admirable job showing how the biblical narrative of the Star ought to be central to research, and he forms his own theory around the biblical data. The Great Christ Comet is an exciting read on a topic that is little-explored. If you are interested in learning more about this fascinating topic, I know of no other work as thorough as this one. Check out my review of the book.

Book Review: “The Great Christ Comet” by Colin Nicholl– I review the book and provide some more background into its subject and contents.

There are few biblical images which capture the imagination as much as the Star of Bethlehem. Its prominent portrayal in films featuring the Nativity, in popular renditions of a Nativity scene, and its place in many Christmas carols demonstrates its continuing popularity. Colin Nicholl’s work, The Great Christ Comet is a significant contribution to scholarship about the nature of the Star of Bethlehem. Nicholl approaches the topic from both the standpoint of theology and astronomy.

Nicholl’s analysis of the biblical data is extensive and interesting. Early in the book, he establishes that the exegetical evidence is important to anyone–including astronomers–who would like to pinpoint what the Star of Bethlehem may have been.

As I read through the theological portions of the book, I found myself opening up my running Bible commentary document to add several notes as Nicholl provide insight into the text and argued for specifics about the narrative. In addition to interpreting the passage, he also sheds light on it from extrabiblical sources, particularly in regards to the Magi and Herod. Regarding the former, he discusses the practice and likely origin of the Magi, noting they were likely astrologer/astronomers from Babylon. Regarding the latter, he shows how the Massacre of the Innocents would not be so out of place for Herod, and why he would have been so willing to go to the depths of evil action that he did. There were many more times I found Nicholl’s exegesis enlightening on various passages–including prophetic ones in Numbers and Isaiah and others in Revelation.

The interpretation offered by Nicholl related to the movement of the Christ Comet is different than any I have read. Nicholl delves into Revelation 12:1-5a in order to argue that this passage describes a literal astronomical phenomenon with the celestial movements of Virgo, a comet, and a meteor storm in view. It was in this section that my confidence in his conclusions wavered. He makes a convincing argument for showing that the comet could have moved and shined in the way he believes is described in this passage, but I am less convinced by the simple connection of Revelation to Matthew in this literal, astronomical way. The infancy narrative of Matthew and the description in Revelation are both referencing the birth of Christ, but I’m not convinced John in Revelation is attempting to give a full explanation of a cosmic event that occurred here. Regardless of my reservations, however, Nicholl does establish that this is a possible, if not probable, reading of the text while also laying out in extensive detail how a comet could have engaged in this “cosmic drama.”

I am not an expert in astronomy, so my comments on that regard are that of an interested lay person. Nicholl gave significant background into astronomy before he delved into some of the data and the competing theories regarding the Star of Bethlehem. This included extensive discussion of the nature of different kinds of comets and how they move throughout. At many points these details are accompanied by historical drawings or artistic renditions of the aspects discussed. Nicholl’s theory is outlined in intricate detail, and it includes a kind of procession of the comet throughout various astrological signs to the point that it reaches Virgo. At this point, the Magi were convinced by the movement of the comet that a significant birth was occurring and they headed west. Nicholl draws upon the words of the Magi as well as Matthew and Luke’s infancy narrative, in addition to Revelation 12 to show that his theory corresponds to literal readings of the various passages and allows a real astronomical event to lie behind the explanation of the comet. This, however, does not mean that the comet is a purely naturalistic phenomenon, as Nicholl argues that the one-of-a-kind, astounding nature of this comet and its performance–down to marking the very location of Jesus’s home in Bethlehem–point to divine intent.

One significant difficulty with the book is the overall feeling of “assured results” found throughout. A search for “certainly” shows up 66 results; 9 for “unquestionably” (each used in context of conclusions drawn). Other words like “undoubtedly” (11 results) show up throughout as well. While it is admirable to have confidence in one’s own position, at times I wondered whether the arguments presented could yield such levels of confidence. The very existence of such continuing debate over the nature of the Star of Bethlehem calls into question any interpretation which comes along and offers certainty across the board, whether it is the refutation of other theories or the interpretation of the Book of Revelation.

So much is invested in the relation of Revelation 12 to the infancy narratives that if one remains unconvinced by his exegesis there, one may not find his overall theory convincing. However, this is not necessarily the case. The argument he presented for a great comet being the origin of the Star of Bethlehem was quite convincing to me, despite my not being fully sold on the Revelation 12 theory. One does not have to accept Nicholl’s view of how the comet played across the sky to accept that the comet is the best explanation.

As far as substantive critique of Nicholl, on the astronomical part I admit I don’t have the knowledge to offer much. Both theologically and astronomically, it seems Nicholl’s proposal is airtight and stunning. Frankly, that is probably where my suspicion comes from: I tend to be a bit suspicious of anything that is such a perfect fit. The Bible is a complex work, and the debate over the Star of Bethlehem is entrenched with many differing positions. Could it really be so simple (in the sense of having this be the answer)? I would like to say yes. I want to. But I’m not sure I can be fully on board. Nicholl has convinced me that the Star was a great comet, and the movement he describes seem possible, but it is perhaps only a personal feeling of reservation that holds me back from embracing the whole picture. This does say something for the strength of Nicholl’s argument, of course, for it suggests that it is really this personal reservation that holds me back rather than significant criticisms.

Nicholl’s concluding thoughts about the Christ Comet deserve to be quoted:

What the Great Christ Comet did… was extraordinary and merits wide telling. People of all disciplines… must come to grips with its story. In an era when science is often viewed as the enemy of religion, the Christ Comet suggests that science may be the best friend of religion. In a period when the claims of Christ are commonly disregarded, the Star callse upon all to give his claims a fresh reappraisal… (Kindle Location 7343).

Whatever one thinks about certain aspects of Nicholl’s argument, the book as a whole presents a comprehensive, deep case for the Star of Bethlehem being a great comet. The Great Christ Comet is a fantastic, deep read that will expose readers to a variety of topics in a fresh way. The amazing intricacy of the movement of the comet and its correspondence to the readings Nicholl presents in the book would be, if true, a monumentally powerful testament to the power of God and the truth of the Gospels. I enjoyed it immensely, even though I may not be fully convinced of every detail.

-Overstates case at points
-Exegesis of some passages uncertain

Disclaimer: I received a copy of this book for review purposes from the publisher. I was not required to provide any specific kind of feedback whatsoever.

Eclectic Theist– Check out my other interests site for posts on science fiction, fantasy, television, and more!