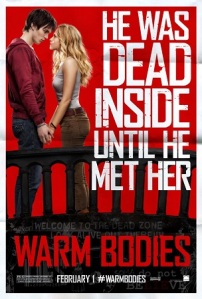 What is a Zombie? What if a zombie had some kind of thoughts in their head? What if… love could be involved? These are the types of questions raised–often in a very tongue-in-cheek fashion–in “Warm Bodies,” a zombie thriller with a twist. Here, I will analyze the movie from a Christian perspective. There will be SPOILERS in what follows.

There are corpses. Walking ones. It’s kind of a problem, because in order to survive they need to eat humans.

Yet “Warm Bodies” goes beyond standard zombie fare. “R”, the main character–a zombie “corpse”–meets Julie and something is changed in him. His heart has a beat, and he is slowly starting to get better; he starts talking more normally a well. Eventually, this change manifests itself well enough for his personality to come out and for Julie to start to realize there is more to him than meets the eye.

Unfortunately… R also happened to kill Julie’s boyfriend. And, he’s been eating said boyfriend’s brain as well. He’s “not proud of it” but he also wants to find out from the brain what it is that makes Julie tick.

There is also the questions of the other “corpses”–will they too have some kind of heart-moving moment? And what about the skeletal zombies known as “bonies”?

The solution seems to be love. But there is more to it than that. Julie’s love awakens R and their touching relationship begins to wake other “corpses” from their slumber. But R remains a corpse. There is something yet to be done for him. That comes in a climactic scene in which R and Julie are pursued by bonies. R grabs Julie and puts his body under her in order to save her as they jump from great height into a pool of water.

R emerges from the water cleansed and alive. Does this theme echo at all with Christianity? I couldn’t help but immediately think of baptism. The scene is stunning. R falls into the water and as he descends and rises out, his old self–his “corpse”-ness– is washed away. He emerges restored. He is human. I found this not very dissimilar at all to casting off the old Adam. R was a new creation. So are we (2 Corinthians 5:17). I personally found this scene as central to the entire film. It was the emergence of life from death. It was stirring.

As for the bonies? Well, they all get slaughtered because they are beyond hope. The cavalier attitude the film throws in this aside fits well with the rest of the tongue-in-cheek attitude of the movie, but on reflection it seems almost inappropriate. It is easy to celebrate the destruction of dehumanized flesh-eating monsters, but how did they get that way? Ultimately, it was because they were left alone in their “corpse” state long enough to devolve into mindless human-killing machines. It is a truly sobering thought to consider that this isn’t too terribly far from the “real world.”

How is it that humanity got to be this way, with the split between humans and undead? It’s a question the film does not explore. But it is easy to see some potent imagery happening: people are vulnerable; other people are predatory. The theme is only barely developed in the film, and even then it is often played off as comedy. But the truth is that, unfortunately, this is how humanity often plays out. Many people are dead in sin (Romans 8:7) and continue to live out their lives apart from the saving work of Christ. We are to go out into the world and spread God’s love to them. We are to get to them before they harden their hearts; before there are any “bonies” out there.

As for us? We too were dead in sin. But the old has gone, the new has come. In Christ, we are a new creation. We are washed clean from our sins.

Warm Bodies: Exhuming Humanity– Anthony Weber compares the book and the movie to draw out even more themes and provide an extremely thorough evaluation of them both. If you don’t follow his blog, you really should do so.

Be sure to check out my other looks at movies here (scroll down for more).

Having scoured the internet for great posts to commend to my readers, I have turned up this smorgasbord for your reading pleasure.

My Father’s “Eviscerated” Work – Son of Hobbit Scribe J.R.R. Tolkien Finally Speaks out– Christopher Tolkien gives some fascinating insight to the world of the Lord of the Rings as well as Tolkien’s writing process in this interview/overview. I find it unfortunate that he feels his father’s work has been distorted by all the commercializing, and in particular I am saddened by his analysis of the movies. I have enjoyed them greatly and found The Hobbit in particular to be edifying (see my analysis of the first Hobbit movie). Nonetheless, this was a fascinating read.

William Lane Craig: [Young Earth] Creationism is an embarrassment–  A Youtube video that is really a picture with an audio file in which Craig discusses the scientific impossibility of the young earth position which is held by the majority of evangelical pastors. The problem is that some have taught that the only Biblical position is that of the young earth interpretation and when youths realize that the earth is not 10,000 (or so) years old, they will fall away.

Much Undead Ado About Nothing– Our recent obsession with zombies and the undead has lead to some interesting philosophical and scientific reflection. Check out Anthony Weber’s excellent post, which relates back to The Walking Dead, among other references.

The New Apologetics– Check out this fantastic post on literary apologetics and using imagination in the defense of the faith.

‘Going Clear,’ Lawrence Wright’s Book on Scientology– Scientology is fascinating in its ability to continue. Founded by a science fiction author who describes the real world in terms that reflect those writings, Hubbard founded a religion that continues to fascinate. Check out this look at a recent book outlining the beliefs of Scientology.

Time to Tour the Camp– I found this post on the Holocaust and abortion fascinating and convicting. Please, check it out.