Abortion: The Struggle Between Objectivity and Subjectivity 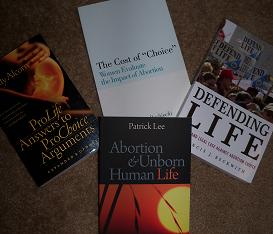 I’ve noticed in the past that as I debate the moral issue of abortion, it seems as though people tend to ignore reason in lieu of emotional appeals. Upon further examination of the issue, I am even more convinced that this is the case. But what is at the bottom of this appeal? Why is it that something which must have an objective answer is treated like subjective, lukewarm hogwash? The reason, I believe, is because the issue of abortion is involved in the overarching debate of subjective (relative) versus objective ethical theories.

Now, 1) fails miserably on a number of logical and scientific levels. See my other posts on the topic for discussions of these reasons (notably, this post and this one). But if 1) is rejected, then 2) may be the only way for pro-choice advocates to argue for their position. Unfortunately, 2) boils down to a kind of subjectivism about morality which ends up being self-defeating.

I am reminded of the echoing catch-phrase popular with politicians, “I am pro-choice, but against abortion.” What does this mean? Often, those who say such things generally mean that whatever someone else wants to do is fine with them. We shouldn’t try to limit the choices others make. We don’t have any reason to regulate what choices someone else can make or can’t make. And sure, I think abortion is wrong, but what right do I have to force my morality on others?

Initially, such arguments seem to make intuitive sense. The problem is that while the argument is trying to avoid forcing any “ought” statements, it has one huge “ought” planted right in the middle of its train of thought. That is, that “We ought not limit the choices of others.” But why should this be the case? There are certainly a huge number of cases in which I would limit the choices of others. Rape, for example, would be one instance where I would say this choice is not to be allowed. Perhaps the argument could be modified, then, and say that as long as one’s choice doesn’t harm anyone else, we ought not limit it. But then this pushes the burden of proof back onto argument 1), which is becoming ever more difficult for the pro-choice advocate to uphold.

Not only that, but having an “ought” statement like any of those above goes exactly contrary to what such statements are asserting. What if I choose to disagree with the statement that we “ought not limit the choices of others”? Should my choice to disagree be limited?

Furthermore, what reasons are their to argue that one should have absolute and total control over one’s own body? For if we do think that this is the case, we should then cease efforts in trying to limit substance abuse, cutting, anorexia, suicide, bulimia, and the like! These are all cases in which someone is simply making choices about his/her own body! If I want to cut myself, that should be my choice! If I want to starve myself, that should be my choice!

No, the bottom line is that the pro-choice camp wants to advocate total relativism. On this view, that which is ethically right for one person is okay for that person. There are innumerable difficulties with such a view (I’ve only touched on these above).

Thus, it seems to me that the pro-choice advocate has insurmountable difficulties with his or her position. First, this view cannot accurately measure when one’s “personhood” begins objectively. Second, it desires to claim an objective “ought” statement which ultimately defeats itself. Third, it runs contrary to scientific advances in measuring the stages of life of the human. Fourth, it stands on shift philosophical soil, for it is unable to accurately define “personhood” in any sufficient manner.

Thus, I conclude, as I’ve done so many times before, that to be pro-abortion is to hold a view that is positively irrational.

16 thoughts on “Abortion: The Struggle Between Objectivity and Subjectivity”