This is part of a series of posts on the “Life Dialogue” within Christianity. Check out other posts in the series here. 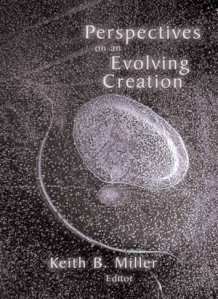 I recently read a very interesting article on theistic evolution by Loren Haarsma and Terry M. Gray entitled “Complexity, Self Organization, and Design.” Interestingly, I found what I think are some of the most interesting arguments for the theistic evolutionist position, but I also found some of the hardest objections to the position (scientifically) that I have stumbled across.

I’ll start with the interesting evidence for their position. First, they note that the word “design” doesn’t belong exclusively to the Intelligent Design theorists, because theistic evolutionists argue that God designed the initial laws which gave rise to evolution and eventually humanity. In other words, God foreknew and intended for mankind to evolve, and set up the laws such that we would (or at least that some sentient beings with which God intended to interact would arise, 289).

They further argue that “With the right set of rules, a random, iterative process can start with a simple environment and self-assemble a complex environment” (293, emphasis theirs). The arguments for this position are interesting to me, and I am no scientist, but it seems to me that the three ways from which they argue for this possibility make more sense to me if there is some kind of intelligence behind the process.

The three strategies for self-organized complexity they argue are:

It seems to me that 1) could be simply incorporated into laws at the beginning of the universe  (but these laws would have to be designed, as the authors point out). 2) seems to me as though it simply couldn’t be totally random. For evolution to work, on the understanding I’ve gleaned from my readings, the complexity would have to aid the survivability of the entity. I think a problem here is that there is no way to determine when/why/how the random interactions suddenly latch onto those things which are helpful. If it truly is a random process, then it would randomly continue to select for characteristics, casting off old ones and making room for new ones.

Incorporating natural selection doesn’t seem like it would help much here either, because then those random selections which are negative would terminate the species. So my problems with 2) are twofold (even granting that God Designed the laws such that these interactions would occur): 1. there doesn’t seem to be an explanation for the process stopping the random selections (and therefore keeping the trait); 2. we aren’t talking about computer algorithms here, we’re talking living entities–if they select the wrong traits, they die.

Ultimately I found these arguments interesting reading, but I just don’t see how they support Theistic Evolutionism more than, say Intelligent Design. The authors do make the interesting point that it could have been the case that God set up/designed the laws such that life would arise, but the ways that complexity is integrated into the process seems to me, at least, to demand further explanation.