“God, Time, and Creation”: A Seminar with William Lane Craig 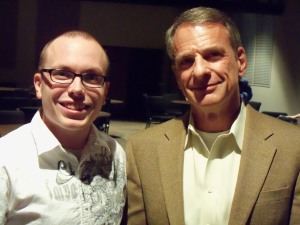 Over the past weekend, I was privileged to spend some time in Georgia (Atlanta area) at the seminar “God, Time, and Creation” with William Lane Craig (in picture next to me). It was part of a class of the same name for the Master of Arts Program with Biola University.

The seminar was a blast. I took approximately 25 pages of notes. Craig’s lecture notes comprised about 440 pages. Awesome!

The seminar focused on God’s relationship to time. Is God timeless, or temporal? Interestingly, Craig holds that God was timeless without creation and temporal subsequent to creation. His book, Time and Eternity, expands on the issues at great length.

After that, we covered the static (B-theory) of time–which holds that all of time and space is a kind of 4-dimensional block–and the dynamic (A-theory) of time–which holds that temporal becoming and passing away is real. It seems that the B-theory of time is, at best, extremely counterintuitive. If the B-theory is correct, our feeling of passing through time is illusory. Further, the theological problems with the view make it really implausible. If time is static, then the J.W. from three hours ago is literally a different entity than the J.W. now, because each is a different “slice” of  a four-dimensional “block” of time. So, for example, it would seem as though the J.W. now could not be punished for the sins of a past J.W.–they are, in fact, different entities. Therefore, the doctrines of atonement, justification, sin, etc. seem to be at best vacuous. So a static theory of time, I think, is very implausible for the Christian to hold.

I’m reading through Paul Helm’s Eternal God: A Study of God without Time right now. He holds that God is timeless, and holds that time is static. I’m interested to see if he counters any of these theological issues.

Craig concluded that without creation, God is timeless–there is no change. But once God created, He underwent at least an extrinsic change, which Craig argues means God is temporal subsequent to creation.

This is one of the few areas I disagree with Craig on. I actually think it is more theologically plausible to hold that God is timeless, period. The main problem with this view is that many argue a timeless God entails a static theory of time. If I find on my further study into the area that this is the case, I may be forced to abandon the view that God is timeless. Therefore, I’m looking forward to delving into greater detail on this topic.

I’ve read Brian Leftow’s Time and Eternity and found it extremely interesting and thought-provoking. Craig is highly critical of Leftow’s view and charges that Leftow makes category mistakes throughout his work. As I said, I’m also reading Helm’s Eternal God, so I’ll see how that holds up. This is a very interesting topic which affects the core of study about the nature of God, how God relates to the world, divine providence, and many other areas. I’m excited to continue my research in this area.

On a side note, the Atlanta area is pretty awesome to visit! The weather was gorgeous. It isn’t that much fun driving there, however.

J.W. Wartick is a Lutheran, feminist, Christ-follower. A Science Fiction snob, Bonhoeffer fan, Paleontology fanboy and RPG nerd.
View all posts by J.W. Wartick »
« Book Review: “A Carpenter’s View of the Bible” by Charlie March
Atonement and a Timeless God »

7 thoughts on ““God, Time, and Creation”: A Seminar with William Lane Craig”