Shoulders of Giants? -Philosophy and Science in Context, or, “Lawrence Krauss jumps off!”

If I have seen further [than other scientists/philosophers] it is by standing on ye sholders of Giants.- Isaac Newton

We act as if they’re [philosophers without current knowledge of science] authorities about something; they knew nothing!- Lawrence Krauss

Lawrence Krauss recently appeared on the English [UK] radio show “Unbelievable?” In this radio program, Krauss and Randy Holder, a Christian, were in dialog about “A Universe from Nothing?” [not necessarily Krauss’ book, but the subject in general]. The dialog, unfortunately, showed that Krauss continues in his ignorance of the importance of philosophy to his own subject, as well as his own flippant dismissal of generations of scientists.

At one point in the program (around the 26:00 mark), Krauss says the following:

I don’t [indiscernible–he may say “also”] care about what Mr. Leibniz said… we refer to philosophers who wrote at a time when we didn’t know that there were a hundred billion galaxies. [So?] Who cares what they say? We act as if they’re authorities about something; they knew nothing!- Lawrence Krauss 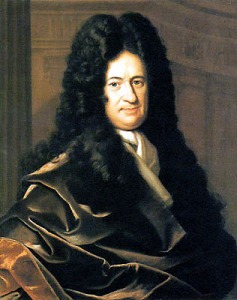 I can’t think of a more galling statement for a contemporary cosmologist to make. Gottfried Wilhelm Leibniz, for those who don’t know, happened to be one of the men who discovered infinitesimal calculus. He also (among countless other contributions to mathematics, science, social sciences, engineering, and philosophy)  developed a calculator, contributed to the development of binary language, was one of the first to posit that space was relative, and developed the principle of sufficient reason (which supports all scientific investigation).

Yet, according to Krauss, because he lived in a time before we know how large the universe was, he “knew nothing!” You see, Krauss, and some other scientists and thinkers with a scientistic/physicalist bent, too often throw out the very basis of their thought. How far do you think Krauss could get in his cosmological research without infinitesimal calculus? How would Krauss go about investigating the causes of various natural phenomena without the principle of sufficient reason?
The answer is pretty simple: he wouldn’t get anywhere.

Krauss, like those before him, stands on the shoulders of giants. But, unlike those who are humble enough (or who know enough about philosophy and history?) to admit it, Krauss says “We act as if they are authorities about something, they knew nothing!”

Really, Krauss? Let’s see how well your next research project goes if you throw out all the contributions they made to your methodology. Next time you do an experiment, try to do it without parsimony or inference to the best explanation. Write to me how that goes!

What’s happened with people like Krauss, and I can think of others (like Stephen Hawking, Richard Dawkins) who do the same thing, is that in their gusto for the marvels of modern science, they have forgotten the very basis for their methods, their research, and their rationality.

Without philosophy, there would be no way  to infer causes from effects; without the principle of sufficient reason, there would be no reason to think that causes even have effects; without a well developed notion that what will happen can be inferred from what has happened, these scientists could not even get going. But then they have the absurd tendency to turn around and reject philosophy. They say things like the quote Krauss fired off above.

Here’s the thing: science is utterly dependent upon philosophy to survive. If we didn’t have philosophy–if we didn’t have the developed notions of rationality, inference, and the like–there would be no science. Other theists (and philosophers) have contributed things like parsimony/Occam’s Razor to the wealth of philosophical methodological backbone which makes the scientific enterprise possible. In fact, there is still debate over whether we can reliably make inferences from science (for one example philosophically defending scientific inference, see Wesley Salmon, The Foundations of Scientific Inference). Some scientists have now apparently become those who sit in the ivory towers, blissfully ignorant of how their own research depends upon others’ outside of their field.

I suspect a multifaceted problem behind the motivation of those who throw philosophy out the window once they’ve embraced full-fledged empiricism. First, many of these thinkers have demonstrated they don’t actually know what empiricism means as a–that’s right–philosophical system. Apart from Krauss and Hawking, one could cite the recent example of Richard Dawkins admitting that he doesn’t know what “epistemic” means. Note to those who embrace that philosophical system of Krauss et al.: without epistemology, you would not even be able to justify inferences to best explanation. How’s that for a dose of reality?

Second, there is a kind of blatant ignorance of–or even intentional trampling on–the historical development of scientific inquiry. I hesitate to say that philosophy makes a “contribution” to science, because that’s not what it is. A simple study of schools of knowledge reveals that science, by its very nature, is utterly dependent upon epistemological research. Without such development, there would be no scientific method.

Third, these scientists constantly make philosophical claims, apparently in complete ignorance of the fact that they are philosophical claims. For example, in the same dialog Krauss argues that “the universe certainly doesn’t care what I like…” and throughout the discussion points out that it doesn’t matter what we think, the universe is revealed in a certain way by research.

He apparently seems utterly oblivious to the fact that that, in itself, is a philosophical position. One could take a rival position and argue that the appearances of nature don’t actually determine reality because everything is mind-dependent (idealism, solipsism, or other schools). It’s not enough to just point at nature and say “see, this is how things are!” because if that’s all one does, then someone could say “Your ideas about how things are are dependent upon your mind and ideas, and therefore don’t have any access to reality.” No scientific research could rebut such an argument, only a philosophical position in which nature can give us a reliable record for rationality can ground science.

Krauss dismisses philosophy very nonchalantly. It seems as though he (and others like him) is oblivious to the fact his entire system is philosophical. Consider the claim that “science can examine reality.” How does one go about proving it? One could argue that one could simply make a test and show that over and over again in circumstances y, x result happens, so we are justified that when we assert that if y, then x. But of course we would have to justify that a test can be connected to reality; we’d have to figure out what it means to have “justified” belief; we have to show that our scientific method is trustworthy; we have to assume that mathematical truths are true; we have to operate within a rational perspective; etc. All of these are philosophical positions. Some of them are debates within philosophy of science, in fact. The bottom line is that whenever someone does science, they are utterly reliant upon philosophy. By simply taking the empirical world as something which can be explored, they have made a number of philosophical assumptions, whether realized or not. Scientists take much of the philosophical development as a given before they even start their research. And then, some of them, like Krauss, have the gall to turn around and dismiss philosophers as though they “know nothing.” Suddenly, he has undermined his own system of thought, without even acknowledging that it is a system of thought.

Frankly, some of these scientists are just confused. Thankfully, many scientists operate with a system that respects the contributions of philosophy to science and encourage the interplay between the fields of knowledge.

Here’s the bottom line for those scientists who agree with Krauss: your entire field of research can only proceed if you grant over a thousand years of philosophical development. One major contribution was made by Leibniz, whom people like Krauss casually dismiss. But without the theistic philosopher with the awesome wig, scientists would have nothing. Thanks, philosophy! Thanks again, Christianity!

32 thoughts on “Shoulders of Giants? -Philosophy and Science in Context, or, “Lawrence Krauss jumps off!””