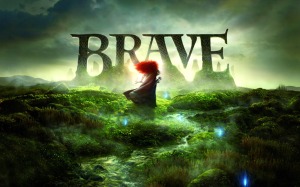 ,” a tale of a young Scottish girl’s coming of age, released recently. I am a huge Pixar fan so I couldn’t wait for this one. In what follows, I will provide a brief overview and review of the movie, followed by some Christian reflections. If you’re only interested in the reflection, skip down to the “Themes to Discuss” section.That said, it should be obvious that there are major plot spoilers below.

Brave follows Merida, a princess whose father in some ways endorses her Tom boyish ways, while her mother tries to get her to be the perfect princess. Conflict rages when Queen Elinor, her mother, tells Merida she is to be wed to one of the firstborn sons of the other clan leaders. Merida would rather marry in her own time and for love, while still being able to pursue her love of archery and other warrior’s tasks.

Ultimately, Merida seeks the help of a witch, to whom she was led by will-o’-the-wisps (in this movie, spirits which lead you to your fate), in order to change her mother. Her lack of specificity leads to her mother being turned into a bear. King Fergus, her father, is known for having his leg cut off in an epic battle with Mor’du, the demon bear, and so her mother’s shape turns her into a mortal enemy of her father. Merida thus has to balance keeping her mother safe with trying to turn her back before the change becomes permanent. Not only that, but the tribes are bordering on open war as they desire to have Merida’s betrothal announced.

Merida manages to calm the tribes with a speech somewhat guided by her mother-bear. In the speech she endorses marriage for the sake of love instead of arrangement. The climax comes when her mother-bear is discovered and King Fergus leads the tribes to pursue her, thinking the bear has killed his wife. As they are about to kill Queen Elinor-bear, Mor’du arrives. Elinor-bear fights Mor’du to protect Merida and eventually defeats him, but sustains great injury to herself. Merida manages to undo the spell by finally admitting that it was she herself who did this to her mother, turning her into a bear because of her own pride (before she had been saying it wasn’t her fault). Her mother returns to herself, and the tribes leave, convinced that one should marry for their own love. Happy endings all around.

I liked the movie a lot but I can’t help but think it was missing something. Merida herself is little involved in the climax; instead, it is her mother who pulls all the weight. Because her mother spends much of the movie unable to talk, it is hard to relate to the character as much as it is to Merida. It seems, in some sense, by the end, that although Merida has experienced a coming-of-age, she is still very reliant upon her parents.

Further, it seemed to me that they could have developed Merida’s own character more before the plot began to roll in full swing. The action scenes experienced with Merida were wonderful, but they were few and far between. It would have been significantly more interesting to have Merida developed further in order to make her into a character that is only hinted at in those beautiful scenes where she climbs a mountain, defying fear; or where she races through a forest, landing arrows on every target. The movie, it seemed, wavered between trying to appeal to the adults in the crowd and the children, and ultimately never found a voice. Unlike “Up” or some other huge successes from Pixar, “Brave” was good, not great. Overall, I can’t help but feel I wanted more. When one sees a teaser image like the one featured here, it seems the movie should have so much more of that epic imagery than it did.

Perhaps the most important theme in Brave is that of reconciliation. Initially, Merida is convinced that the way to change her mother back is to repair the tapestry she destroyed due to her anger. However, she continues to deny that she is at fault for what her mother turned into. She blames the witch, saying she didn’t know that her mother would become a bear. She just wanted to change Elinor’s mind.

Yet it is only when her mother’s change is seemingly permanent that she realizes the truth. She repents to her mother, in perhaps the most heartfelt scene in the movie, saying “I did this to you…” while she weeps. It is here, I think, that the Christian can draw out a theme from the film. It is too easy to blame the ills we bring about on others. Yet we are called to repentance. Without sincere sorrow and repentance for our sins, we are not reconciled. It is when we say, “I have sinned against You” that we are truly repentant. And, like Elinor, Christ has given his life for our sake. Despite the grievances we bring to God, God reaches out and saves us.

There was little focus on what was meant by “fate” in the film. The only references to it were in the context of Merida struggling to change her fate. It was unclear what was intended, then, by fate. If it is changeable, it seems it is hardly fate. Here, “fate” seemed more a vague plot device than anything to do with the reality of the world portrayed.

There was a bit of confusion over good and evil. The witch in the film was more bumbling than cruel. She did not (as far as the movie reveals) intentionally turn Mor’du into a demon bear forever, nor did she intentionally nearly cause Elinor to become a permanent bear. In some sense, one could say she brought about the reconciliation refereed to above.

Again, Mor’du initially seems a great evil, but one can’t help but feel sorry for him, particularly when at the scene of his death his spirit (?) nods a thanks to Elinor and then becomes a will-o’-the-wisp.

Overall, “evil” in the film is slightly ill-defined. This doesn’t mean it is bad, but it does make it hard to really jump on board with one side or the other.

Ultimately, it seems the primary theme of the movie is indeed reconciliation. Good vs. Evil  is a theme, but the lines are fairly unclear. Instead, the movie reflects on Merida’s coming of age and her reconciliation with her mother. A good flick, but not a great one.

As always, I’d love to hear your own thoughts on the movie from a Christian perspective. What did you think?

The film has some violence and action sequences. The witch is scary but not wholly evil. The notion of spirits changing one’s fate is vague and ill-defined. The humor is probably understandable for about an 8-year-old level.

The film, in my opinion, is not one to be terribly worried about as far as content is concerned. It is clearly fictional and ultimately is resolved by a reconciliation between mother and daughter.

See my other reflections on movies.

RE: Brave and Matthew 18:15-35– another excellent Christian reflection on the movie. A slightly different angle than my own work.

Engaging Culture– my guide for drawing out Christian themes and discussions from movies.

J.W. Wartick is a Lutheran, feminist, Christ-follower. A Science Fiction snob, Bonhoeffer fan, Paleontology fanboy and RPG nerd.
View all posts by J.W. Wartick »
« Freedom of Religion and the HHS Mandate
Book Review: “Heresy: A History of Defending the Truth” by Alister McGrath »