It is easy to hear the “real story” of Santa Claus, but few investigate further than looking it up to see the parallels between the Bishop of Myra’s life and that of the story of Santa Claus. There is so much more to his story–and indeed to stories in general–than that.

Saint Nicholas (270-343 AD) was a valiant man who fought prostitution, abortion, and poverty. He attended the council at Nicaea, from which we received the Nicene Creed. At that council, he defended vigorously the orthodox doctrine of the Trinity. He was an exemplar of Christian teaching put into practice. Not only that, but the legend which has grown up around his life has inspired and enthralled untold numbers of people through the Christian era.

It is important to note the intertwining of legend and truth in the stories about St. Nicholas, and the impact that has had upon innumerable people. George McKnight, writing in the early 1900s, explored a number of issues related to the mingling of fact and fiction in the life of St. Nicholas. The quote highlighted above touches on many of these topics.

First, there is power in narrative. A story which is told well is one which can effect change. We are impacted by fantasy in ways which cause us to reflect upon reality with new–perhaps better trained–eyes. Second, we, as spirited people in a world which we so often see only as the physical, are called to heights of reality by fiction. As McKnight noted, “It is well not to walk with one’s eyes always fixed on the ground.” Our eyes are driven upwards and outwards by the stories we hear–they cause us to interact with others in new ways, and they also cause us to think about topics which perhaps we had not even considered before.

The story of St. Nicholas is no different. Yes, legend has crept into the accounts of this godly man, but what is the purpose of that legend? Not only that, but is it possible to separate out the fiction?, McKnight also commented upon the nature of radical skeptical history being done in his time (about 100 years ago). He bemoaned the fact that nearly every facet of Nicholas’ life is thrown into question with the arrival of critical scholarship. But of course to focus merely upon what is historical fact or fiction is to miss the entire point of the life of St. Nicholas. McKnight goes on:

The story of St. Nicholas consists almost entirely of a series of beneficent deeds, of aid afforded to humanity in distress, accomplished either by St. Nicholas… or through his intervention… The conception of St. Nicholas, then, is almost that of beneficence incarnate. (Kindle Location 469-481).

That is, the story of St. Nicholas, and the legends that surround him, turn him into a type of Christ–one who is deeply concerned for humanity and showing Christian love for God and neighbor.

Yet this is not all there is to the life of the Saint. Although difficult to sift from the legends, there is a historical core to the life of St. Nicholas which is just as profoundly Christian as the legends which have grown up around him. With that said, we turn to the story of St. Nicholas, with an eye toward how his life is one of a Christian lived as well as a story told.

Nicholas is well-attested to have attended the council of Nicaea. There is a possibly apocryphal story about his 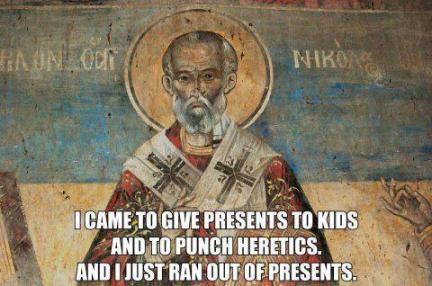 attendance there wherein he confronted the heretic Arias himself and slapped him in the face. The story continues, telling of how Nicholas was initially exiled for his act but later allowed to return after Arianism had been thoroughly acknowledged as heresy. Although it is nearly impossible to know whether this story is historically accurate, there is at least some truth behind the story in that Nicholas was known to vehemently defend the orthodox doctrine of the Trinity.

Nicholas actively opposed prostitution. However, instead of simply condemning the practice, he also gave money to young women in need to keep them from turning to prostitution to feed themselves. Again, this truth served as the basis for a possibly historic legend in which Nicholas learned of three women who were about to turn to prostitution (or be sold into slavery, depending on the account) because they couldn’t pay their dowries in order to be wed. Nicholas is said to have thrown a bag of gold for each young woman through their window so that they could be married instead of sell their bodies. Again, this legend may not be true–but it points to the truth about Nicholas’ life–he gave to those in need and fought against the evils of prostitution. It also points beyond itself towards an ideal.

Nicholas fought against the Pagan practices, which led to his persecution and imprisonment by those angered by his preaching against false idols. Furthermore, his opposition to paganism included working against a number of practices in the pagan world, including abortion. Roman Catholics have continued to spearhead St. Nicholas’ commitment to helping children. A search for “Nicholas of Myra” turns up adoption agencies one after another. Christians have used Nicholas’ example as a call to end human trafficking and slavery. One can see throughout these historical kernels how myth and legend could grow up around this figure–fighting heresy, giving to those in need, and having utmost concern for the innocent were all aspects of St. Nicholas’ life. We don’t necessarily know the extent of his actions in these areas, but we know enough to be inspired.

Therefore, we turn to another part of McKnight’s thought-provoking quote at the beginning of this post:

Take a moment to consider what McKnight is saying here: we know there is a realm of absolutes–a way that things should be. We also have a way that we should like things to be. But the way the world “really is” does not often reflect that. Yet we can enact change upon our realm of existence–we can “lift it up”–by focusing on the way that things should be, and living our lives differently because of that. St. Nicholas enacted this in his life, working towards the ideal while living in an imperfect world. The legends of St. Nicholas inspire us to do the same. We are not to focus so much on the critical challenge–which stories are true and which are “only” legends. Instead, we are to focus on St. Nicholas as a story–one which inspires us to change the world around us.

Nicholas’ life was one which fought against poverty, paganism, heresy, prostitution, and idolatry. He incorporated sound doctrine into his life and then lived it. There can hardly be a better example of a Christian life lived than that of St. Nicholas. Yet that is not all there is to the story of the “real” saint. No, his life is one of calling us to live a life for Christ as well. His life is action. It is a life incarnate with truth and the beneficence that comes from the Christian worldview. It is a call to follow Christ.

J.W. Wartick is a Lutheran, feminist, Christ-follower. A Science Fiction snob, Bonhoeffer fan, Paleontology fanboy and RPG nerd.
View all posts by J.W. Wartick »
« Caring for Creation: A discussion among evangelicals
Jesus’ Birth: How undesigned coincidences give evidence for the truth of the Gospel accounts »