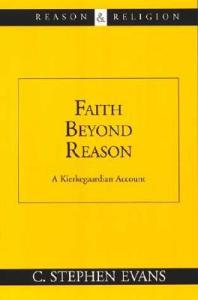 The evidentialist school of apologetics is essentially based upon the notion that the evidence for Christianity is such as to make it rationally justified to believe (and perhaps even compel one to believe). Note that evidentialists (generally) do not claim that this means the Holy Spirit plays no part in conversion or that people are fully capable to choose God.* C. Stephen Evans, in his book Faith Beyond Reason: A Kierkegaardian Account, examined evidentialism in light of Kierkegaard’s critique of the method.

One of the primary arguments Kierkegaard had against evidentialism** is that a human being is incapable of considering the whole range of facts regarding a piece of evidence and so may never be justified in holding evidential belief. Evans characterized this argument (following the terminology of Robert Adams) the “postponement argument”:

The idea… is that historical inquiry is never completed, and thus historical beliefs based on such inquiry must always be tentative. It is always possible, at least theoretically, that new evidence will emerge that will overturn any historical conviction. Thus, if religious beliefs were based on such evidence, they would have to be of this tentative character. (Evans, 108, cited below)

Now–this is key–Evans also noted that “Kierkegaard thinks, however, that religious beliefs should have a kind of finality that differs from this kind of scholarly judgment.” With these quotes in mind, we may examine what seems to be a Kierkegaardian objection to evidentialism.

The objection seems to be that faith requires a kind of certainty which may never be provided by historical inquiry; thus, historical inquiry (evidences) may not provide a justifiable grounding for faith. I think the main problem with this is that Kierkegaard seemingly insisted on an impossible level of certainty for evidence. That is, a dismissal of evidentialism based upon this reasoning seems to be only warranted because Kierkegaard has adjusted the level of evidence needed. It is true that historical inquiry may only ever provide probability, but that does not imply we are incapable of believing anything historical.

Of course, one may argue that I have missed the point Kierkegaard is trying to make. It’s not that all historical inquiry must be subjected to the standard of certainty; rather, only on matters of ultimate import must we have certainty. If this were his claim, I think one may rightly respond by questioning why that would be the case. However, it seems, according to Evans, that Kierkegaard was less concerned with a rejection of evidentialism than he was concerned with maintaining a place for the emotions and subjectivity within faith. On that count, I don’t know of any evidentialist who would argue that one cannot have subjective or emotional reasons for faith either.

Now, to return at last to the quote block above. If all that faith were based upon within an evidentialist system were historical evidences, then it seems the quote is correct regarding the tentative nature of faith. But the evidentialist claim is not that faith may only be based upon evidence. Instead, it is that the evidence is such as to justify or ground faith (some would argue it is enough to compel faith). So perhaps Kierkegaard and evidentialism are not irreconcilable after all.

Perhaps the strongest objection which may be derived from the above comments from Evans and Kierkegaard center around the notion of threshold belief. Evans very briefly hinted at this possible problem for evidentialism: basically, the notion is that for the evidentialist method to work, there must be some “threshold” for commitment to a belief. For Kierkegaard, that threshold is certainty, which is why historical evidence cannot satisfy his criterion. However, for the evidentialists themselves, the question remains as to what that threshold is. If this threshold cannot be pinned down, it may be argued, evidentialism as a system cannot work. I think that this challenge is less an arguments against evidentialism than it is an argument for epistemic uncertainty. However, diving into such an argument is beyond the realm of what I want to hit here. For now, I think that I may answer this argument by simply saying that it does not follow that 1) if we can’t pin down an exact threshold beyond which we must be convinced to commit to a belief then 2) we cannot commit to a belief. The argument is simply off target.

*I say this so as to avoid lengthy debate, one way or the other, regarding how one comes to be saved. My intent in this post is to investigate the apologetic method, not soteriological details.

**I should note that Kierkegaard should be understood within his historical context, in which he was reacting against overly rationalistic faith. Thus, his (sometimes extreme) reaction against rationalism–while overreaching–is perhaps more understandable. There is also, of course, some anachronism in this statement because “evidentialism” is being used in its specific fashion to reference the method of apologetics, while Kierkegaard was reacting against rationalism. I acknowledge this anachronism but simply point out it is for the sake of simplifying terminology in the post.

2 thoughts on “Threshold Belief and Evidentialism- Can evidentialism work?”