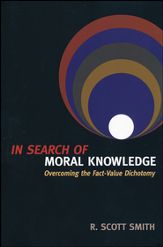 is a systematic look at the possibility of moral knowledge in various metaethical systems, with an argument that a theistic, and specifically Christian, worldview is the most plausible way to ground the reality of morals.

Smith begins by providing overviews of various historical perspectives on ethics, including biblical, ancient (Plato and Aristotle), early (Augustine through Aquinas), and early modern (Reformation through the Enlightenment) systems. This survey is necessarily brief, but Smith provides enough information and background for readers to get an understanding of various ethical systems along with some difficulties related to each.

Next, the major options of naturalism, relativism, and postmodernism for ethics are examined in turn, with much critical interaction. For example, Smith argues that ethical relativism is deeply flawed in both method and content. He argues that relativism does not provide an adequate basis for moral knowledge, and it also undermines its own argument for ethical diversity and, by extension, relativism. Moreover, it fails to provide any way forward for how one is to live on such an ethical system and is thus confronted with the reality that it is unlivable. Ultimately, he concludes that “Ethical Relativism utterly fails as a moral theory and as a guide to one’s own moral life” (163).

For Naturalism, however, Smith contends the situation is even worse: “we cannot have knowledge of reality, period, based on naturalism’s ontology. Yet there are many things we do know. Therefore, naturalism is false and we should reject it not just for ethics, but in toto” (137). His argument for this thesis is, briefly, that naturalism has no basis for mental states–and therefore, for beliefs–and so we cannot have knowledge (see 147ff especially).

Various postmodern theses are also examined, including the highly influential views of Alasdair MacIntyre and Stanley Hauerwas. Ultimately, Smith argues that there are several issues with these ethical positions, and primary among them is the difficulty that without any facts which are un-interpreted, there is no way to have moral knowledge, dialogue, or grounding (see 264ff, esp. 265; 277-278).

One major strength of Smith’s work is that he doesn’t merely outline or only critique the ethical systems with which he interacts. Instead, each system is allowed to present its theses on its own terms before Smith turns to a critical assessment. This is particularly evident in his interactions with Alasdair MacIntyre and Stanley Hauerwas–each of whom has a dedicated chapter to their own systems and then a shared chapter of analysis and critique–but is the case in each instance of a system which he evaluates. This strength is increased when one considers the number of ethical systems Smith interacts with throughout the book. Although no work of this length (or any length, really) could be truly comprehensive, here is offered a broad enough variety of ethical theories that readers will be able to engage with those which are not mentioned.

There are tables scattered throughout the book which actually add quite a bit to the readability and argument. I commend Smith for a great use of these tools throughout the work.

I would have liked to see more development of the positive notion of exactly how Christian theism serves as the basis for moral knowledge. Smith does provide some clear insight into this, but it seems that after the significant development given to so many rival theories, the case for the Christian perspective could have gone deeper.

R. Scott Smith has accomplished an enormous achievement with In Search of Moral Knowledge both by providing an excellent survey and critique of relevant ethical systems and by coupling it with a positive case for a theistic–Christian–grounding for morality. The book can serve as an excellent text for a class on ethics, but may also be used by those interested in exposure to and critical insight into various ethical systems. Smith’s argument for Christian metaethics is compelling and strong, and his criticisms leveled against other systems–particularly naturalism and relativism–are crucial.

6 thoughts on “Book Review: “In Search of Moral Knowledge” by R. Scott Smith”