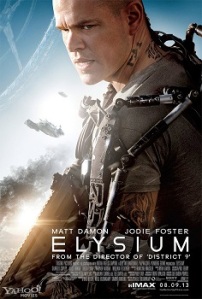 “Elysium” is one of a string of recent action flicks which have taken to exploring bigger issues than how to make the biggest explosion. Here, we’ll look at some themes in the movie and reflect on how they might resonate with the Christian worldview. There will be SPOILERS for the film in what follows. I will not summarize the plot, though a summary may be found here.

The story seems to center around the issue of greed. After all, the premise is essentially that human greed leads to great suffering. The question of whether there is a moral obligation to end suffering is front and center in the movie. The citizens of Elysium live a life of luxury, conveniently located far away from the strife that inhabitants of Earth must undergo. There is a clear and obvious dichotomy between the lives of the people planetside and those on the space colony.

It’s a premise which seems obvious, but there is a twist in the film, which impacts the force of this question. Once the final outcome is determined, and the reprogramming of citizenship is brought about to include all people, Elysium’s automated defenses and medical robots immediately begin helping the people of Earth. Medical shuttles are dispatched with instant-healing devices to help the new citizens. This twist throws a wrench into the reasoning of the question of obligation to end suffering: what if one has nothing to lose in order to help others?

Thus, the question goes beyond mere greed. It is a question of how humans will seek to hold on to what they have, even when it costs nothing to help others. It’s a poignant way to portray the issue, and one which forces viewers to think upon their own attitudes regarding what we have and seek to hold on to.

Of course, this portrayal of the issue doesn’t take away from the question of whether there is an obligation to end suffering. I think the answer, from a Christian perspective, is that we of course do. Then, the question must be asked of how to best alleviate suffering. These and other questions are raised by the film, and in ways which provoke much continued thought.

The issues of greed and suffering are also bookended in the film by the question of class. Even on Earth, where poverty seemed to be ubiquitous, class was an issue. There were those with jobs, those who begged, and those who turned to crime. The sharp distinction between citizens of Elysium and those of Earth makes the point even more obvious. Once again, as Christians, we are forced to ask how we might address this issue of inequality. There are to be no such distinctions in the body of Christ (Galatians 3:28), so how might we help to work towards ending racial, class, and other inequalities on Earth?

There is a constant theme of hope in what seems like a hopeless world. The people of Earth realize that help could come from Elysium, but they must get there first. They turn their hope to the stars, but there is a Nun who educates the young Max that there is beauty on Earth as well–beauty in humanity, despite our fallen nature.

“Elysium,” though featuring some objectionable content, is a film with much to ponder from a Christian perspective. How are we to approach other humans in a way which doesn’t undermine their dignity? We are to work to end suffering, to bring about equality. We are to prevent a scenario like “Elysium” from ever happening.

Elysium: Fighting for Paradise– Anthony Weber addresses a number of other worldview issues brought up in the movie on his fantastic site, Empires and Mangers. Be sure to follow his great blog.

The picture in this post is from a movie poster and I use it under fair use.