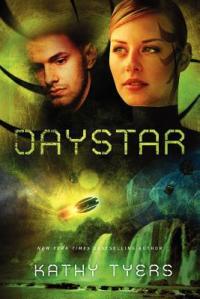 Kathy Tyers’ Firebird series is renowned by many for its explorations of worldview questions in a stirring science fiction setting. I have written on the Firebird Trilogy before. Here, we’ll take a look at the two concluding books in the series- Daystar

and Wind and Shadow

. Specifically, I’ll be analyzing them from a worldview perspective. There will be SPOILERS for the whole series below.

Both books have much to say about human nature. In particular, questions about the extent and nature of our free will abound as we as readers are confronted with different concepts of determinism and free choice. Although this theme is never, perhaps, fully developed in philosophical terms, the very activity of the characters makes a kind of argument towards the notion that we have free choice that is genuine, though the question of whether this might be compatibilist–set alongside determinism–or not is left open.

Daystar also raises major questions about the nature of humanity itself–are we purely material beings; or perhaps purely spiritual and trapped within a material body; or are we a unified center of body and soul? The organization known as the Collegium puts forward a kind of mystic view that we are eternal souls which, when we die, go back to the infinite, impersonal divine. There are strong elements of both Gnosticism and Platonism to be found in this teaching, and it is one which resonates with New Age type beliefs and other worldviews today. We need to think on this for ourselves: when it comes to the very concept of what it is to be a human, are we essentially matter, or is there something more? Christians need to think on such issues deeply and consider our own standing in the universe.

There is a fantastic meld of science fiction technology and the reality of the spiritual realm found throughout the Firebird series. Wind and Shadow

, in particular, moves the concept of spiritual warfare front-and-center. A Shadow being possessed Kiel, a kind of priest, and attempted to convince him that he ought to proclaim himself as the coming Messiah. In this way, the spiritual being sought to gain control over the course of events. The interplay of the spiritual and physical was something that was interwoven throughout the Firebird series, and it is important to reflect as Christians on how that might play out in our own lives.

Not long ago I read an excellent book on spiritual warfare which presented several views on the topic. I think we need to be prepared to dive into such challenging topics and see what the Bible has to say about them.

reads much like a lengthy biblical Gospel. The story therein is that of the coming Messiah. But it is far more complex than that. It is also a story of the attempt to exterminate an entire people group; the story of religious conflict; of materialism; and more. However, the core of the book, and much of the series, is the hope for the coming Boh-Dabar, the Messiah. That Boh-Dabar ends up being Tavkel, a herdsman from a secluded place.

Tyers brings forth themes about the Messiah in surprisingly insightful ways. First, she integrates several parables into the text as Tavkel instructs people in the faith. (See a recent Sunday Quote! post for one of the parables from the book.)Some of these parables find parallels in those Jesus taught; others are clearly inventions of Tyers’ mind to try to put forth spiritual truths. All of them are unique and engaging. Second, Tavkel is very explicit about his own nature as divine. I think this was a good move on Tyers’ part because sometimes it can be easy to miss how clear Jesus’ own claims of divinity were. When Christ claimed the authority to arbitrate and expand the Mosaic Law, that would have been astonishing. In Daystar, Tavkel points to himself as a divine figure.

One conversation with Meris, a character who is a foreigner and who holds to rival beliefs, depicts Tavkel explaining the notion of being fully divine and fully human. Tavkel explains it by pointing out that “My father created the human form. He has mastery over it…” Meris objects by arguing that it doesn’t make sense that Tavkel can be “one hundred percent” human and one hundred percent God. She asks “Which [are you]?” Tavkel responds, “Both.” When Meris says “That’s not possible,” Tavkel responds: “Is light a wave or a particle Meris?” (426). Though the analogy is not perfect, it does help us to envision how we might assume to much in our own ability to comprehend reality.

Third, there is also much discussion over how the Boh-Dabar may fulfill some prophecies in unexpected ways and that even some preconceptions of what the Messiah figure should be or what verses are even about him might be mistaken. This finds its parallel in some ways in Jesus, who, being the Messiah, yet did not come as a military leader as many expected. To see the people in Daystar figuring out the implications their Messiah has for their understanding is a unique insight into how the Christian story itself might have played out during its earliest days. Confronted by the reality of a risen Lord, notions of what the Messiah should be had to fit this risen Savior.

Daystar is filled to the brim with interesting conversations and speculations like this, and the best part is that they point beyond themselves to the truth of God’s word.

and Wind and Shadow

are excellent works in a fantastic science fiction series. I highly commend the whole series to you, dear readers, not just as a great way to think about worldview, but also simply as excellent science fiction by a bestselling author of the genre.

Kathy Tyers’ “Firebird Trilogy”- Faith, Humanity, and Conflict in the Far Future– I look at a number of worldview issues in the Trilogy in this post.

Microview: “The Annotated Firebird Trilogy” by Kathy Tyers– I review the trilogy with a brief look at the plot and some positives and negatives in the book.

Popular Books– Check out my looks into other popular books (scroll down for more).

Sunday Quote!- A Science Fiction Parable– What might a parable look like in the future? Well, not too much different from one now. Check out this post on Tyers’ speculative parable in Daystar.