The “Dependency” Argument for Abortion: A Dilemma 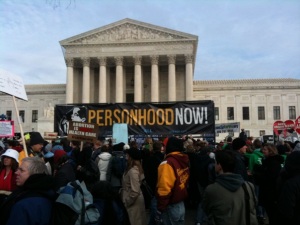 One common argument for the pro-choice position is what I shall call the “dependency” argument for abortion. This argument suggests that because the unborn is dependent in a unique way upon the mother, abortion is permissible. For example, one might argue that because a fetus cannot survive without the direct use of the mother’s body, the unborn does not have a right to life. The status of dependency upon another being in such an intimate and unique fashion means that abortion is permissible, according to this argument.

One way to respond to this argument is to show that the dependency of the unborn upon the mother is not relevantly unique. For example, one may cite the dependency of a newborn upon his or her parents, of a person hooked up to an artificial heart or some other dependency-creating situation. However, here we will consider what I think is a more direct and intractable problem for the abortion advocate. Namely, that the dependency argument yields an inescapable dilemma for their position.

Suppose we were able to create artificial wombs–something which doesn’t seem all that preposterous given that it’s being worked on right now–to which we were able to move the unborn at any point up to birth and allow to grow there. In this case, the growing being is not dependent upon its mother or even any woman or person. We may cut out the people doing maintenance on the artificial wombs by having some kind of automated maintenance system.

Would it be permissible to terminate the unborn within the artificial womb?

I think this is a serious dilemma for those who use the “dependency” argument in order to ground objections to abortion.

Perhaps one might try to answer the dilemma by embracing the second horn of the dilemma and suggesting that once the dependency situation is removed, then the right to abort is also removed. However, the same type of dependency which the unborn is in with the mother has simply been transferred to an artificial womb. Perhaps, however, one cannot be relevantly (morally) dependent upon a machine. But this is to effectively beg the question, for the very grounds of the pro-choice argument is that it is dependency which creates a state of permissive abortion. Perhaps they could modify their stance and say that it is actually dependency upon the mother alone. But here is where the danger of an “ad hoc” stance rears its ugly head, because the relevant criterion–dependency–is maintained while it is the location of the unborn which has shifted. If dependency is alleged to be enough to ground abortion rights, then smuggling in additional premises alongside dependency defeats the initial argument.

The point needs to be emphasized: I think this is the best route for the pro-choice advocate to try to go to avoid the conclusions of the dilemma, but if they do go down this route it raises even more questions for their position. First, if we suppose that dependency must be on a person to be morally relevant, than it undermines the notion of dependency as the reasoning for allowing abortion to begin with. For, in this case, it would be the person grounding the moral status, not the dependency. Second, to embrace this horn means that the pro-choice advocate is effectively granting that the unborn has some right to live, so long as it is not in this relevant state of dependency. This is a startling admission, and it must be emphasized that this means, frankly, that according to the pro-choice advocate a being with a right to live has that right suspended so long as a valid “dependency criterion” can be met. The implications of this would be enormous.

Moreover, if we grant that the second horn may be embraced by means of saying that if dependency is removed, then it follows that any possible way to remove the dependency situation, if such a way could become reality, makes abortion impermissible.

Now, suppose further there were a foundation that was willing and able to pay for anyone (anywhere and anytime) to move their unborn into an artificial womb rather than abort the fetus. For the sake of argument, we will assume this is a risk-free type of procedure, with relevant clinical test results, etc., etc. This strengthens the dilemma posed above because at this point, there is effectively no dependency upon mothers beyond conception. For, the moment a woman finds she is pregnant, she could phone this foundation and transfer the unborn to an artificial womb, relinquish any claim to parental rights, and be done. But if this were the case, then dependency would in a sense no longer exist. The unwanted pregnancy could immediately be ended without the termination of the fetus.

Once again, it seems that in this situation only the location of the unborn remains relevant, should the pro-choice advocate wish to maintain the right to abort. The mother could choose to end her pregnancy by transferring the unborn and all rights/knowledge of/etc. thereof elsewhere at any point.

I realize that some may object and say that having a surgical procedure is an inconvenience, no matter how safe, quick, successful, secret, etc. it might be. But at that point I must wonder where the line is drawn for abortion. After all, if the scenario envisioned above really did exist, and someone really did want to maintain the right to abort, what they would have to be saying is that something thought to be inconvenient alone is enough to abort. Setting aside the fact that abortion is also a procedure–and one with risks–at this point I think I would point out that the dependency argument has been shown to be mistaken, because the pro-choice advocate must now base his or her argument upon the “convenience” of the mother.

I’m fairly sure I’ve read a similar argument to the one I present here somewhere. However, I do not remember where I may have read it and regret to omit a reference to it here.

Pro-life– I have written a number of posts advocating the pro-life position. See, in particular, “From conception, a human” and “The issue at the heart of the abortion debate.”

The image is courtesy of Wikipedia Commons.

4 thoughts on “The “Dependency” Argument for Abortion: A Dilemma”