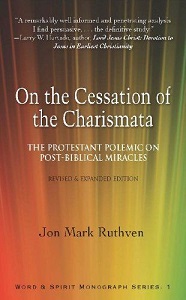 Jon Mark Ruthven’s  On the Cessation of the Charismata

was recommended to me as one of the premier arguments against the cessationist position–the position which asserts that the spiritual gifts like healing, speaking in tongues, and the like have ended. Having read the book, I’d have to say I found it largely convincing and very thought provoking. I’ve shared a different quote from it elsewhere, but here I want to focus one part of Ruthven’s argument. He notes that:

The validity of cessationism depends upon a clearly discernible and internally consistent model of miracle which can be applied transparently and uniformly to all candidate cases as they appear throughout history, both in the biblical accounts and afterward. (44, cited below)

Then, he argues–I think rightly–that the cessationist has yet to provide just such a model. It seems instead that there is a kind of arbitrary cut-off point at which miracles are said to be untrustworthy occurrences. Ruthven spends a lengthy portion of the book arguing that the cessationist models have failed this consistency test.

What do you think? Have you seen a model that can consistently affirm the miracles in the Bible but then uniformly and without qualification deny those which are extrabiblical and/or modern? What stance do you take on the issue of miraculous gifts?

“Are Miraculous Gifts for Today?”- A look at four views in Christian Theology– I provide a look at four positions on miraculous/spiritual gifts in contemporary theology.

Jon Mark Ruthven, On the Cessation of the Charismata