Book Review: “Bavinck on the Christian Life” by John Bolt 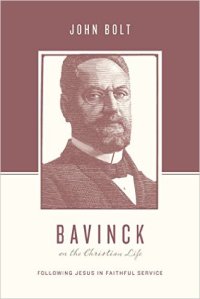 The chapter on union with Christ is particularly insightful. Bolt draws out Bavinck’s insights into Christology, which include going beyond redemption and looking to eschatology and creation as important aspects of Christology as well. Union with Christ is explored from various angles, including penetrating looks at deism and pantheism alongside an examination of the Orthodox doctrine of theosis. This latter portion is particularly interesting both because it allows for some evangelical-Orthodox dialogue and because it clarifies some important distinctions Orthodox distinctions make that allow them to avoid pantheism or panentheism in regards to divinization.

I also appreciated the extensive biographical background to set the stage for Bavinck’s theology by showing how he interacted with the controversies of his time. The overview provided herein of Bavinck’s thought is also insightful. He was thoroughly Calvinist. His view of the world was tied up in Trinitarianism, and he grounded not only his view of reality but also of various aspects of reality in the Trinity. An important insight from Bavinck is the way in which work is part of the human vocation and living out of the image of God. As a Lutheran I particularly enjoyed the emphasis on work as being part of God’s plan for humanity.

One criticism I have is that the author seemed to have a bit of a political axe to grind. In chapter 3, for example, welfare is mentioned at least twice and referenced off hand a third time. Bolt seems keen to point out that Christians can differ on this subject, writing at one point “The Bible is quite clear about the responsibility of God’s children to help those who are poor and needy. Whether or not this commitment to the poor demands support for higher taxes and greater government welfare is quite another matter” (Kindle location 1211-1221). The 10th chapter of the book returns to this issue and places it in Bavinck’s own context with debates over the social gospel and the meaning of the Kingdom (see especially Kindle location 4300 and following). This at least places the whole discussion in Bavinck’s own day.

Yet, remarkably, Bavinck’s response to social inequality seems, according to Bolt, to simply shift the problem elsewhere. Bavinck casts inequality and social injustice squarely into the realm of divine sovereignty: “God’s preordaining was the final, most profound cause of all differences among creatures… It is neither the free will of man, nor merit and worth, nor culture or even nature that is the source… but God’s almighty and all-powerful will…” (4540). I’m not saying this is inherently mistaken. What I’m saying is this doesn’t even begin to answer the question raised: how should we deal with injustice? Sure, a Calvinist would argue that all that happens is sovereingly decreed by God, but how does just saying that in any way answer the preceding question? It just moves it up a (or several) level(s).

Bavinck was also someone who “ascribe[d] to women a primary calling in the home, and he point[ed] to human history, as well as the narratives and laws of the Old Testament, as evidence for a patriarchal structure of human society” (Kindle location 3001). Yet, he also argued that no man is complete without some aspects of femininity and no woman is complete without some aspects of masculinity. How that plays out is largely left up for interpretation, though Bolt argues that this demonstrates that although Bavinck would align with “complementarianism”–the view that men and women have different roles in church and home–he would not ascribe to some of the “will-to-power, macho masculinity and eroticized or subservient, passive femininity” (Kindle loc 3076). Bavinck also challenged some of the patriarchal views of his own society. One way he did this was supporting women’s suffrage. These are admirable qualities He emphasized the role of children and family as the calling of humanity, but one wonders what this might say to those who remain single or childless.

A final, though minor, critique is that there are many portions of the book in which the overall outline of the book is walked back through, or references are made to previous chapters alongside a brief description of why such a reference is relevant in context. It’s a minor thing to point out, but it was distracting at points and gave an impression that the book wasn’t always organized logically.

Bavinck on the Christian Life provides perspective on Bavinck’s thought, life, and context. It isn’t quite as polished as the other books in the series, but it remains a worthy read.

Disclaimer: I was provided with a review copy of the book from the publisher. I was not asked to give any specific kind of feedback whatsoever.