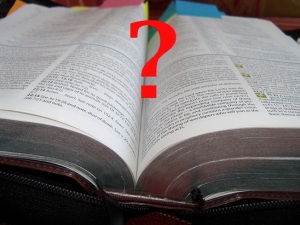 I’ve been reading through the Bible and making a kind of commentary on the whole thing as I go. Needless to say this has been a lengthy project! Here’s an expanded note I made in Psalm 50.

I know the saying I’ve heard many places, “Never quote/read a Bible verse.” The meaning is of course to emphasize the word “a” and point out that all verses have context. Although that is true, I don’t think that means we can never read just one verse and get a clear meaning or teaching out of it. Here’s a pretty neat verse, though:

In context (50:9-13), you can see that it is surrounded by God noting that God has no needs, that God does not need to eat or drink, and the like.

In the Ancient Near East, sacrifices were often thought to be providing the needs for the gods. Here, in context (50:8, 13), it is clear that YHWH is distinguishing Himself from those alleged deities. There are no needs God has. Indeed, if God had needs, there would be no need to tell us because all belongs to God already. This is a powerful reminder of God’s sovereignty over all the universe.

There is also no small amount of irony/humor involved in the passage. The irony is centered on the fact of God’s power as well. Supposing that a God who created the entire universe does exist, is it not frankly hilarious to imagine that same deity depending on us to provide food? Against the backdrop of the Ancient Near East (see Walton’s work for an extended look), this makes more sense, though. It was thought that by providing for food and drink for the gods, the one offering the food could free the deity up to take care of more cosmic needs. In stark contrast, the God of the Bible claims not only to be fully capable of taking care of the cosmos, but also asserts there are no needs God has that we can fulfill. It’s an astonishing declaration of God’s might.

It also can provide some degree of comfort: God doesn’t need you. Grace is a gift.

What are your thoughts? How might we take this verse in its ancient context and draw out the humor for today?