“The Martian” – Hope, Humanity, and God- a Christian look at the film 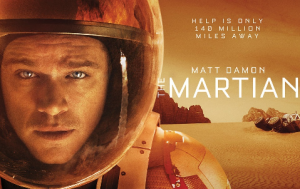 The Martian is receiving some excellent reviews from critics, and for good reason. It is a stirring story about humanity and our capacities and drive to survive. Here we will look at the worldview htemes found in the film. There will be SPOILERS in what follows. I will not be summarizing the plot, but a summary can be found here.

A major theme of the movie is that of hope. Mark Watney, the astronaut left behind on Mars, becomes the center of hope of the entire world. All eyes were following as he continued to fight against the unforgiving Red Planet. When the mission to rescue him finally comes to a climax, there is a scene of people around the globe watching in anticipation and hope. They celebrate merely hearing his voice.

I can’t help but think about the hope of the shepherd in a certain story told be a Jew in Galilee, in which the celebration over but one lost sheep was immense. There is an inter-connectedness that humans experience as we seek to help others and exult in the triumphs even of strangers in need.

Perhaps the central theme in the movie is that of the very, well, human-ness of humanity. We need companionship, and the poignancy of that is found throughout the film. Mark fights against the loneliness he feels by fighting one problem after another. But simply hearing someone’s voice is enough to send him celebrating, and when the rest of his mission team come to rescue him–and he can hear his commander’s voice for the first time, the overwhelming sensation of emotion he feels leads him to tears.

Humanity was not made to be alone.

By no means does this film offer much related to worldview issues about God, but there are a few moments worth mentioning. The first is when Mark has to whittle a crucifix in order to get some material to burn for making water. He looks at the figure of Christ on it and says that he thinks that Jesus wouldn’t mind him using it to save his life. Though this never develops beyond a joke, it is interesting to see how it ultimately is a kind of salvation through the cross–this time in a very literal sense.

Prayer is hinted at when the head of NASA asks the head of the Mars projects whether he believes in God. The answer that came was unexpected: with a Baptist mother and Hindu father, “I believe in several.” The response? “We need all the help we can get.”  Again, this joking moment does reveal a hint of truth: that God is the one who provides help. Of course, not the many gods of Hinduism, but the true God is the one who saves.

“The Martian” is a great film. It explores the human need more than most films ever even touch on. These needs reflect deeply ingrained desires that mesh well with the Christian worldview. Only in Christ can we ultimately find the consummation of hope.

Andy Weir’s “The Martian” A Christian Look at the Book: Humanity, Community, and Hope– I look at the the worldview themes found throughout the book on which the film was based.

Also see my other looks into movies (scroll down for more).

3 thoughts on ““The Martian” – Hope, Humanity, and God- a Christian look at the film”