Book Review: “The Love of God” by John C. Peckham 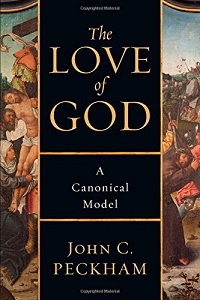 The book is organized topically, with each chapter focusing on a different aspect of divine-world relationship. These include the semantics of divine love, volitional and evaluative aspects of love, whether divine love can be emotional or foreconditioned, and whether that love is reciprocal. Other topics are addressed in addition to these, including the debate over various ways divine-world relationship may be portrayed.

Peckham surveys an enormous number of biblical passages as he analyzes these questions. Unfortunately, only rarely is much time spent on drawing out how these various citations are directly relevant to the points being made. Thus, readers are left to look up the many passages themselves to see whether they concur with the evaluation provided. Peckham largely sides with a perspective that favors human freedom. He also stands against the notion that God is completely immutable or changeless.

The latter point, however, is well-nuanced. Drawing on the work of Rob Lister, who affirms God’s impassibility alongside God’s capability of being impassioned, Peckham qualifies his concept of divine love and its relationship with the doctrine of impassibility. Effectively, he argues that God’s love is reciprocal but does not necessarily rule out the possibility of immutability. He does, however, seem to favor a perspective in which God at least partially changes in response to prayer and love.

Peckham’s perspective in the introduction appears to be quite broad-minded, allowing for concessions to those on either side of (and in between) debates like Calvinism-Arminianism, Thomism-other views, Augustinianism-other perspectives. However, as the book goes on, it becomes apparent that apart from a few places wherein there is some nuance (as noted above with immutability), Peckham draws conclusions with some certainty, while effectively setting aside the opposing view.

The value one gets out of The Love of God, then, largely depends on the amount of work one is willing to put into it. If one takes the time to look up the many, many biblical references, compare them back to the text, and examine the counter-arguments that Peckham offers, this is a book that is well worth the time spent. By contrast, those not willing to put in that time will at least get an idea of what the various major questions are regarding God-world relations and love, but will only be given one perspective on those questions in most cases. The questions are not left as open as many of them seem to require.

Disclaimer: I received a review copy of this book from the publisher. I was not obligated to write any specific kind of feedback whatsoever.