The Expanse: Episodes 6-7 – A Christian perspective 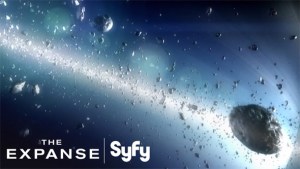 I’ve been enjoying watching SyFy’s TV series, “The Expanse,” quite a bit. Part of that is because I’m a huge science fiction fan, but another part of it is because there is plenty of worldview discussion to go around. I’ll be posting a series on worldview in episodes from the expanse biweekly as they come out. There will be SPOILERS for the episodes discussed here, as well as possibly any earlier episodes. Please don’t post spoilers for later episodes on this post.

Home, Family, and Self

Once more we have the OPA entangled in a struggle for a sense of home. I emphasized this last time for episodes 1-5, but here we have the need for home countered by the revelation that the OPA killed Chrisjen Avasarala’s son, and it has become personal for her. Family was emphasized on her side of the plot, as she tries to play that card to get more information about the OPA. It will be interesting to see whether dynamics of family, self-service, and home continue to drive some of the main characters in the series. One question I still have: how important is it to have a place we can call “home”? So far, “The Expanse” seems to emphasize that this is a great need, and this resonates with a Christian worldview when, throughout the Bible, we have continued pointers to a promised land and sense of place.

One of the most common expressions regarding lies is that we “weave a web” of them. The more we engage in deception, the more we must tell more lies to keep up the facade. Detective Miller goes deeper and deeper into a web of lies. The question is: what does he have to ground himself? His job was terminated instantly once it was found out he was delving too close into territory that others wanted to keep quiet. What does it mean to continue to seek truth even in the face of such opposition–even threat to one’s own life?

Christianity was based upon the testimony of those who were willing to die for truth. This isn’t merely an appeal to sincerity of belief, but rather an argument that shows that some truths are worth dying for–something difficult to do if you know what you’re dying for is false. Miller–technically no longer Detective Miller–seems like he is willing to go to extraordinary lengths to discover the truth. I wonder where it will lead him.

Survival and the Secular Ethic

The conversation Burton has with the stowaway spy, Kenzo, in episode 7 is interesting, because it focuses on the notion that survival is the highest good for humanity. This reflects an understanding of reality that puts mere continued existence as “the good” as opposed to anything else. Frankly, this is the kind of grounding that secular ethics almost always end up appealing to, whether it is mere survival or some abstraction like “human flourishing.” Yet in this episode we see how hollow such an ethic is. It leads to Burton’s willingness to kill anyone–whether it is someone he just met (and has completely at his mercy) or to keep from getting captured.

Later in the same episode, Kenzo has a deep conversation, asking whether he is going to be dropped out an airlock because he is found to be “inconvenient.” Perhaps with the most moving line in the series so far, he asks to be told if they’re just going to kill him so he can make his peace, because “I am not an animal.” Yet, so far, many of the people have been acting just like animals, again, with Burton’s argument for mere survival as his motto for life.

The absurdity of this way of life was revealed by Kenzo, because his words resonate with us. Mere survival is not enough–we are not animals. Indeed, even the more popular appeals to ground ethics upon “human flourishing” is little more than putting forward prettier words for the same concept. Is mere survival, or even the move towards whatever hedonistic view of “flourishing” we’d like to put forward, the best we can do? I don’t believe so, and I have argued at length that the secular grounding for morality fails even on its own criteria. We are not merely animals, and we can do better than grounding a philosophy of life on an animalistic drive to survive.

Such an ethic makes the most sense on a theistic view of the world, and Christianity is the worldview that stands up under scrutiny. Those who wish to deny this and continue to affirm a secular ethic must embrace the very opposite of that which Kenzo states in this episode. That is, they must affirm “I am [merely] an animal” and then ground their moral action on that.

The Expanse continues to bring intriguing questions about worldview to the forefront, while couching it all in a pseudo-noir science fiction epic. I’m loving the series so far, and would like to know what you think as well. Let me know in the comments!

3 thoughts on “The Expanse: Episodes 6-7 – A Christian perspective”