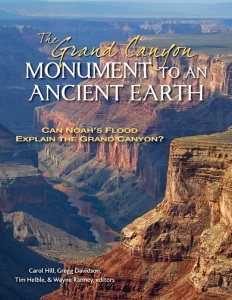 Part 1 outlines two views of the Grand Canyon: that of flood geology, in which the vast majority of the Canyon’s sediment was laid down during Noah’s Flood; and that of conventional geology, in which long time periods and observable, repeated processes can account for the Canyon. This part includes chapters contrasting the time frames of flood geology and conventional geology, showing the massive difference between the two views conclusions about how the Canyon formed. Part 2 is entitled “How Geology Works” and covers things like sedimentary rocks, plate tectonics, and time measurements. Part 3 looks at fossils and what they tell us about the age of the Grand Canyon. Part 4 surveys how the Grand Canyon was carved. Part 4 gives a verdict on flood geology from the evidence provided.

The authors provide an introduction to geology generally speaking, and then focus what is covered onto the Grand Canyon. Throughout the whole book, the Grand Canyon serves as the testing ground for what modern geology teaches about the Earth. Then, it is contrasted with what YECs claim about the age of the earth and the processes that formed it. Time and again, this shows that YEC claims are found wanting. The chapters on fossils are particularly telling in this regard.

For example, Joel Duff demonstrates, in “Tiny Plants – Big Impact: Pollen, Spores, and Plant Fossils” that there are entire, massive chunks of sediment without any pollen or plant spores contained therein. And these layers aren’t just randomly distributed; they’re in the oldest layers of the rock, such that it demonstrates what conventional scientists have claimed, that there simply were no pollinating plants long ago. But if flood geology is to be believed, these sediments were laid down during Noah’s Flood, which would have entailed all kinds of mixing of dead plants and animals as the surface of the Earth was radically changed. How then, are there thousands of feet of sediment without any pollen? How did microscopic plant matter manage to get sifted out in such a clear distinction from other layers? This is the kind of in-depth look at the specifics of flood geology that abound everywhere in the book. YEC arguments are subjected time and again to direct refutation like this, making the book invaluable.

The book is also valuable simply as an introduction to geology as well as some biology and other sciences. I learned an extraordinary amount from the book, and I feel fairly confident that I had a working knowledge of geology. In other words, the book is not simply a refutation of flood geology in the Grand Canyon, it can also serve as a valuable introduction to several related topics.

I would be remiss if I did not call out the beauty of the book. There are breathtaking full-color photographs of the Grand Canyon throughout the book, accompanied by numerous graphs and charts. But these illustrations do more than just look pretty, they are almost always explicitly tied into the text in meaningful ways. I found myself thoroughly poring over each and every one, whether I was looking for the division between layers of rock in a photograph or flipping back to a chart repeatedly as I came to understand it better. These illustrations are perhaps made more impressive by the modest price of the book ($26.99 regular price on Amazon). Simply put, you can’t get books with this much information and as beautifully put together as this for that price, yet here it is.

There are only two minor points I’d like to mention as negatives, but they are closer to nitpicking than anything else. First, although the introductory chapters (and a few other places) note that the young earth creationist arguments about the Grand Canyon are scientific and expressly stated as being testable, I suspect many YECs will respond to the book by appealing to some presuppositional theological perspective. Though this would be a mistaken response, it would have helped the book to perhaps include one chapter showing how the YEC claims about the Canyon are inherently scientific and can be tested without a specific theological narrative. Again, this point is made, I just think it could have been elaborated a bit more. Second, there was the briefest mention of one of the most popular arguments for Intelligent Design, that of the Cambrian explosion. The mention was so short that it is difficult to see what the authors were intending.

I have read dozens, perhaps hundreds of books on the debate over science and religion. That said, The Grand Canyon: Monument to an Ancient Earth is a remarkable achievement. It provides some of the most thorough, in-depth analysis of young earth creationist reasoning that is available to date. It is beautifully illustrated with photos and charts that are directly related to the text, and it is reasonably priced. If you’re looking for analysis of flood geology from a scientific perspective, this book gives you the perfect test scenario. I cannot recommend it enough.

Disclaimer: I was provided with a review copy of the book by the publisher. I was not required to provide any specific kind of feedback whatsoever.

The Grand Canyon: Monument to an Ancient Earth (Kregel, 2016).

J.W. Wartick has an MA in Christian Apologetics from Biola University. His interests include theology, philosophy of religion--particularly the existence of God--astronomy, biology, archaeology, and sci-fi and fantasy novels.
View all posts by J.W. Wartick »
« Really Recommended Posts 5/13/16- full quivers, the man who refused to salute, and were you there?
“Conviction” by Kelly Loy Gilbert- Faith, Baseball, and the messiness of sin »