Book Review: “Wesley and the Anglicans” by Ryan Nicholas Danker 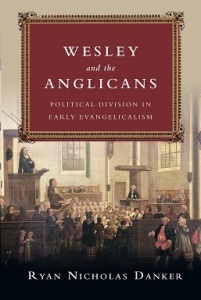 Danker does an excellent job interweaving different disciplines into his approach to the issues at hand. Instead of taking a purely theological approach to the reasons Wesley and the Anglicans split, he argues forcefully that sociological and political issues were just as–if not more–important to the division than the theological reasons. Indeed, theologically there was an Evangelical movement with Anglicanism (Danker uses Evangelical to refer to those within the Anglican church and evangelical to refer to those either immediately or ultimately outside of it). There were plenty of theological sympathies to be had for Wesley’s movement within the Anglican communion, but John Wesley (and Charles Wesley, his brother) ultimately pushed against the political and sociological hierarchy too hard to maintain unity.

Indeed, for Wesley, his commitment to aspects of the Anglican Church made the pushback from Evangelicals (and others) within the church more surprising to him. These ideas are developed through a number of case studies. For example, because of Wesley’s commitment to evangelism, he continued to encourage lay preaching. When confronted about how this may lead to laity taking over the Sacraments and the like, Wesley was (to sum up Danker’s argument) surprised; after all, he was not encouraging these lay preachers to make their own church buildings or orders of hierarchy–how could this therefore be seen as a challenge to the Anglican Church? Wesley’s own intriguing mixture of old and new made it difficult both for him to understand why he was being criticized so harshly and for those within the Anglican Church to see why he was being so divisive.

Political pressures were also brought to bear on the topic, and much of this was due to hierarchy within the church and concerns over how Wesley’s teaching might lead to a collapse of this hierarchy and unity of belief. Thus, laws were passed which began to make lay preaching more and more difficult, for small groups were suddenly considered rivals to official church business by law. Further pressure came from the laity, which began to push back and wonder why they couldn’t do things like administer the Sacraments. All of this came to a head over the course of several meetings of the Methodists, and ultimately led to the split with the Anglican Church we see today.

Danker does an admirable job uniting so many divergent threads into one continuous stream, but he does so in a way that sometimes leaves a bit to be desired. Perhaps the main downside of the book is that it reads very dryly. It doesn’t so much bring life to the historical persons and events as it does describe them. This does an adequate job of presenting the ideas and important topics, but it makes it less exciting to read than some other historic works. It conveys information, but doesn’t necessarily awaken a love of the topic in the reader.

Wesley and the Anglicans is an interesting read about a vital point in church history. Danker also demonstrates that church history ought to incorporate broader studies into its approach than just theology or history. It isn’t the most exciting history book, but it presents readers with a great deal of information on a topic of interest.

Disclaimer: I received a review copy of this book from the publisher. I was not obligated to provide any specific kind of feedback whatsoever.

One thought on “Book Review: “Wesley and the Anglicans” by Ryan Nicholas Danker”