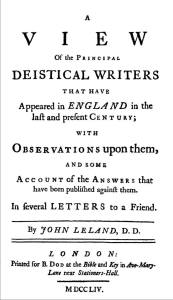 John Leland’s (1691-1766) epic takedown of Henry St. John, 1st Viscount Bolingbroke’s (1678-1751) argument for natural law from a deistic perspective as found in Leland’s A View of the Principal Deistical Writers That Have Appeared in England in the Last and Present Century (available free online) is a wonder to behold. Leland’s work is a massive 2-Volume tome that basically surveys the entire field of the deistic controversy in the 18th century and provides not just an overview of the deists’ writings, but also response to them and extensive commentary on other written responses. In other words, the book is probably the single most valuable contemporary account of the deistic controversy that was written.

Leland deals extensively with Bolingbroke and engages nearly every part of Bolingbroke’s argument for deism. Here, I want to highlight one passage from Leland’s account:

Those may justly regard universal benevolence as a fundamental law of our nature, who suppose a social principle, and a benevolent disposition, distinct from self-love, to be an original disposition, natural to the human heart, and implanted by the Author of our beings; but if self-love be, as [Lord Bolingbroke] represents it, the only original spring of human actions, and the centre of the whole system, universal benevolence cannot be properly represented as the fundamental law of our nature. Upon this scheme the private interest of the individual, whenever it happens to come in competition with the public good, ought to be preferred.

The relevance of this very argument to modern debates over morality, particularly on atheistic schema, is immediately apparent. Without God, in a universe sans not just creation but also sans design, sans lawgiver, etc., it seems self-interest is really the only possible “ought” to be found. But if that is the case, why not acknowledge that morality in the best interest of “all” or “the group” is at best a fiction? Let’s not be mistaken; many atheists do acknowledge exactly that. But there remain holdouts, certain that a framework for discovering morality.

As Leland notes, however, it would be very difficult to get around the notion that without some kind of divine law or lawgiver, self-interest seemingly must become the basis for morality. Indeed, though Leland lived before Darwin, it would seem that non-theistic evolution would suggest this as well: self-preservation and the passing on of one’s genes as the greatest good. But if that is the case, it becomes clear that no matter how lofty our expectations or claims about morality become, when it comes down to it, self-interest will be the final arbiter of morality. If that is the case, then it becomes difficult to maintain that universal benevolence or some other good could be actually attainable on such a system.

Perhaps a counter-argument could be that we could set the goal at universal benevolence, but acknowledge the failings of the system. But if that is the case, it seems the failings of the system itself–allowing self-preservation/interest to be the true ultimate arbiter of morality–decries the system. The goal would become “universal benevolence, so long as it does not impede my self-interest” and that seems to be a very problematic way to view morality. Of course, one could simply bite the bullet and acknowledge this as the best possible moral system to offer without God. So be it.

Historical Apologetics– Check out all my posts on historical apologetics.

For more reading on the psychological studies behind spanking, see Psychology Today as well as the summary article linked above (or here).

3 thoughts on “Natural Law, human morality, and self-interest in Leland vs. Bolingbroke: A centuries-old discussion that remains relevant today”