Book Review: “The Dictionary of Christianity and Science: The Definitive Reference for the Intersection of Christian Faith and Contemporary Science” 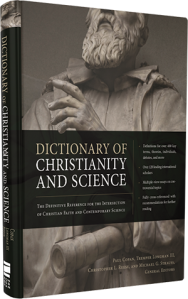 Christianity and science has been a subject of the utmost interest in my mind ever since I began to seriously study anything. I’ve been reading seriously on the topic for almost a decade now, and so when I saw that Zondervan was releasing The Dictionary of Christianity and Science, I could not help but be excited. Reviewing a dictionary, however, I have come to discover, is a difficult task. How exactly does one go about rating such a massive work? In preparation for this review, I read the dictionary from cover-to-cover, even looking through the contributors.

The book is filled with lengthy entries on many questions related to Christianity and science. Several of the most controversial questions (evolution, Adam and Eve, and the length of creation days are just a few examples) receive multiple viewpoint answers. Entries on controversial figures or institutions are written by those who are sympathetic to their viewpoint. Apart from these hot-button issues, many wider topics are addressed. Quantum mechanics, bioethics, and life are examples of these broad topics. Their inclusion is vastly important because it helps to define the parameters of the more controversial topics, and they also serve as a springboard for discussion of other topics. The book can act as a kind of one-stop shop for some of these important, broad topics, providing definitions and overviews that will be acceptable to almost anyone engaged in discussion. This is important, because these entries are non-partisan and while some may quibble about individual details, they provide a way forward in discussion.

Other topics that are given significant space include historical and modern authors (more on this below) as well as more specific concerns like “the singularity” and “string theory.” These again provide extremely important overview and background for deeper discussions on both science and Christianity. I must emphasize the excellent nature of each entry. Though I disagree vehemently with some of the entries (and one of the young earth entries even uses the silly “were you there?” type of argument regarding the age of  the earth), I found that overall the entries were each valuable reading, even as one who has read extensively in this area. The bibliographic references provided after every entry were also superb

I think my only major complaint with the work is that it seems to come up short in its coverage of historically important persons. Realistically, no single book or even multi-volume work could adequately meet this need, but I think at least a few more historical figures should have been mentioned. Yes, several of the most important historical figures are present, but even some major thinkers are left out. I can’t claim to have read comprehensively in this area, but some authors I see cited again and again in contemporary literature are unmentioned. George Frederick Wright (1838-1921) is one major example. Wright wrote several works specifically on the topic of Christianity and science and was one of the earliest and most engaging theistic evolutionists (or evolutionary creationists, depending on your preferred terminology). Though Wright may not be so frequently cited today, he was a rather important figure in his own time, and one who could stand much thoughtful inquiry today. Another, more glaring omission is that of John Ray (1627-1705). Ray was one of the earliest geologists and was instrumental in the arguments over whether fossils were truly vestiges of things long dead or merely tricks of the earth. Moreover, his books are consistently filled with theology and intriguing, if outdated, reflections on Christianity and science. To be fair, I should also note that the coverage of modern authors is fairly comprehensive, and I ran into every major player I could think of who has written extensively on science-Christianity issues.

The Dictionary of Christianity and Science is an excellent work–one which certainly deserves its place on the shelf of any interested in this important intersection of faith and science. Though I wish it had more entries on historical figures, it remains an interesting read with many meaty entries well-worth taking the time to digest fully. It comes highly recommended.

+Meaty entries full of valuable references
+Provides broad perspectives on numerous topics
+Articles from major thinkers as well as specialists across the respective fields
+Many topics, variety of issues covered

3 thoughts on “Book Review: “The Dictionary of Christianity and Science: The Definitive Reference for the Intersection of Christian Faith and Contemporary Science””