Theistic Evolution: The Charge of Deism- An answer from George Frederick Wright 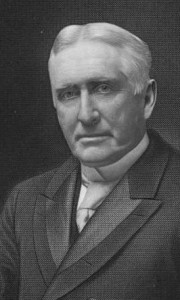 George Frederick Wright (1838-1921) was one of the earliest Christian thinkers to hold the position now known as “theistic evolution” or “evolutionary creation.” He was also an incredibly thought-provoking author, having written numerous books on the subject of science and faith. In his Studies in Science and Religion (1882), he addresses a wide variety of issues related to science and Christianity. One of these was the idea that Christians affirming evolution may as well be deists.

One immediate difficulty with this notion, of course, is that no deist would affirm that God became incarnate and brought about the salvation of all humanity. But the charge is still leveled to this day: those Christians who affirm evolution are deists. Wright’s own answer to this charge took a different direction. Instead of pointing out the fact that theistic evolutionists/evolutionary creationists (terms not yet coined in his day, to my knowledge) affirm any number of doctrinal beliefs that exclude deism, Wright argued that evolution itself, understood holistically, would allow for the affirmation of things like final ends in nature. Thus, because final ends would mean telos or purpose in nature, the charge of deism must be mistaken. Moreover,  any number of things can be affirmed as having natural causes without entailing deism. Wright argued that speciation could be included among these things.

Regarding the latter point, Wright argued that:

The theologian stands in no more need of miracles for the production of species than he does for that of the planets and their movements. Direct providential interposition is not for the irrational creation, but for the rational. So we may divest ourselves of theological prepossessions of any kind in reference to the material machinery by which the diversity of animal and vegetable life has been produced. (In my Kindle version, location 1173)

Wright’s point bears some elaborating. His argument is that theologians do not need to appeal to special divine activity in regards to things like the motions of planetary bodies. These types of things, he refers to as “irrational creation.” Planets, asteroids, dirt, etc. are all “irrational” in that they have no rational self. Indeed, part of his argument is that it would not make much sense to posit divine activity for all of these movements, because they would merely show that God has chosen to do everything voluntaristically or on God’s own rather than using things like natural laws. Thus far, his argument is rather uncontroversial. Very few people continue to argue that the planets’ movement, the water cycle, and the like are all, without any mediation, direct acts of God. The controversy is found, instead, in Wright’s adding the “diversity of animal and vegetable life” in among the things which need not have appeal to divine action.

Thus, for Wright, speciation is itself one of the natural processes that goes on in our universe without God’s special intervention. Of course, this is by no means an uncontroversial claim, but it must, at least, make one think about consistency of the application of these notions. Wright is surely correct to say that the movement of the cosmos need not appeal to God’s direct intervention in order to explain it. If that’s the case, then could it not be the case that other things in nature may be of the same type? Wright argues yes.

Moreover, Wright confronts one of the primary reasons for the charge of Deism. He argues evolution does not take away the possibility of final ends in nature:

The real final cause of any contrivance in nature is the sum of all the uses to which it is ever to be put. Any use to which a contrivance in nature is put, we may be sure formed a part of the Creator’s purpose in causing it to be. An element in making up the final cause of the existence of a particular tree, for example, is the good the birds get out of it in building their nests in its branches. But the birds would be very far from the truth were they to regard that good as exhausting the purposes for which the tree exists. (Kindle Location 266)

Here Wright makes what is perhaps the most important point in regards to the charge of Deism against those Christians who also affirm evolution. Though his point regarding speciation as one of the natural causes would be up for much debate, the point he’s making here seems to be one that Christians of all other persuasions would also affirm. After all, if one wanted to strip away Wright’s point, one would have to deny that individual plants or animals have no final causes in them. Such a denial would mean that one takes all telos out of nature; there would be no divine guidance or purpose in any natural process or the lives of creatures and plants. Such a denial would, in fact, be deism. So no Christian is going to want to deny Wright’s point here. But Wright’s point would apply to all life were it to have evolved as well. Simply having something come to its current form by means of evolution rather than special creation does not strip final cause away from it. And because the Christian who is affirming evolution also affirms final causation, divine interaction in nature remains even on an evolutionary perspective.

The briefest examination of Wright that we’ve put forward here could be expanded in looking at his many other works. But the point that we’ve made ought to carry. Evolution does not, in and of itself, remove the possibility of telos or final ends in nature. Because of that, theistic evolutionists (or evolutionary creationists, as many prefer the terminology now) are not deists. Wright’s other, more controversial, point is that evolution ought to be seen in the same light as the movement of planets and other heavenly bodies. Again, this is not to take away final ends or purpose in creation. Wright’s point was that even though we have natural explanations for the movements of heavenly bodies, we still observe final ends in those same movements. He extends that point to speciation, which will surely be controversial, but has precedent in Christian theology.

What is most interesting about all of this is that Wright was writing about this as one of the earliest thinkers on Christianity and evolution. Those who continue to spread the controversy about Christianity and evolution ought to listen to those who first thought on the topic. The wisdom we find there is often startling, and certainly illuminating.

5 thoughts on “Theistic Evolution: The Charge of Deism- An answer from George Frederick Wright”