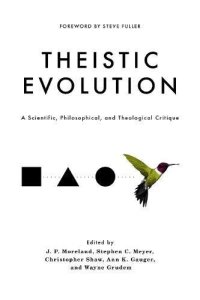 I’ve spent quite a bit of time reviewing, re-reading, and contemplating the massive book entitled Theistic Evolution: A Scientific, Philosophical, and Theological Critique edited by J.P. Moreland, Stephen C. Meyer, et al. I reviewed the book, interacting with the scientific and philosophical parts, and then looking in even more detail at some individual chapters in the theological section of the work. I wished to make a post that summarized some of my thoughts, as well as providing a one-stop shop for viewing my lengthier criticisms as well as those of others.

Theistic Evolution is, without a doubt, the most comprehensive collection of arguments against the eponymous position that I know of in existence. But that is not to say there is going to be much new here for those who have read about science-faith issues. Indeed, though almost every chapter is first published here (except where otherwise noted in a few chapters), most of the arguments have been dealt with or have been ongoing for years, if not decades. Here, I can only offer the briefest interaction with the massive work (but see my longer interactions linked below).

The scientific section is largely outside my area of expertise, so I’ll limit myself to a few broad comments. Time and again, various authors move from saying that scientists cannot determine the exact order of a certain evolutionary chain to saying that there is therefore no such chain. This is deeply mistaken, though I admit I used to buy into this type of anti-evolutionary argument myself. At first it sounds compelling, until one considers that nowhere else do we allow this reasoning. For example, we would not say that no automobile accident happened just because we could not determine the exact order in which individual parts of the cars involved were crushed. Another difficulty with the scientific part of the book is that time and again, the assertions are made that theistic evolutionists do not allow there to be design as a possibility or God acting in nature; yet this is false at best and disingenuous at worst.

The philosophical critique falls largely flat. For one thing, a constant refrain is that theistic evolutionists are no different from atheists when it comes to methodological naturalism, yet this strangely ignores the “theistic” part of the term theistic evolution. Because proponents of said position are theists, they clearly allow for divine activity, and major proponents of the theory like those at Biologos constantly affirm this. Second, assertions that evolution would not allow for theism in the first place also fail both because Christians from the beginning of interaction with evolution have noted that God could simply have ordained the whole process and because those Christians who think in Aristotelian terms can still have final ends in mind with evolution, even on the level of individual species.

The theological critique musters perhaps the strongest arguments in the book, but even here there are a series of blunders that undercut much of the case. In the chapter on the Old Testament, for example, the author fails to defend or even define the meaning of the term “history” and its use to describe the early chapters of Genesis. In the chapter on the New Testament, the author strangely insists that Jude must mean Genesis is “historical” (again failing to define or even touch on what that term is supposed to mean here) while also dismissing claims that other parts of Jude would make other events historical. Then, the author turns around and says that because Jude cites the book of 1 Enoch, that means some parts of 1 Enoch are historical while others aren’t. Which are which? Well, clearly, whichever parts benefit the author are historical; those that don’t are not. Moreover, the same author does not at any point defend the notion of taking a genealogy in the way that we Westerners in the 21st century take it, despite the genealogies in the New Testament being written in an ancient time with a completely different culture. In the chapter on historical Christian theology, the word “creation” is wielded like a sword, leading to some possible confusion on categories related to Aquinas and others.

Definitions are clearly very important in the book, though vastly important terms like “history” or “historical narrative” are thrown about without ever interacting with them. This, despite the intense debate in the field of history about the changing meaning of the term and how history is written. The definition of Theistic Evolution–“God created matter and after that did not guide or intervene or act directly to cause any empirically detectable change in the natural behavior of matter until all living things had evolved by purely natural processes” (67)–given in the book fails to adequately account for the range of beliefs of theistic evolutionists and does not draw adequately from major TE groups. Nevertheless, the authors use that definition as though it can exclude or include people in the umbrella term. Not only that, but some authors rail against TEs for things the definition that the editors themselves endorse use make clear TEs don’t all believe. Prominent Christian philosopher J.P. Moreland is among those who attack TEs for denying a historical Adam and Eve, yet the definition that the editors provide does not actually exclude this belief in any way.

Overall, Theistic Evolution: A Scientific, Philosophical, and Theological Critique does not contribute much new to the intrafaith debate about evolution. For one thing, as noted above, it fails to adequately interact with the actual views of those who hold to theistic evolution, while also failing to acknowledge the breadth of thought such a position represents. Additionally, the arguments presented herein have largely been encountered in other works throughout the science-faith debate. Finally, many of the arguments presented herein are either circular or self-refuting. As noted briefly above (and in more detail in my extended analyses below), several authors simply assert that parts of the Bible are “historical” and then use that to batter theistic evolution, as if no serious exegesis has been done on the other side. Where exegesis is addressed, it is typically perfunctory and laced with dismissals of rival positions. I cannot recommend the book to those wishing to have a full and honest discussion of theistic evolution, though if it does truly represent the best of the best by way of critique of theistic evolution, I would say that those holding to that position may sleep soundly.

My individual sections critiquing the book on numerous fronts can be found as follows:

Book Review: “Theistic Evolution: A Scientific, Philosophical, and Theological Critique” Part 1- Definition(s)– Definitions are a key issue throughout the book, and I take a look at a few here, including the definition the authors use for “theistic evolution” and the lack of interaction with major groups who are advocates of this position.

Book Review: “Theistic Evolution: A Scientific, Philosophical, and Theological Critique” Part 2: Science– A significant portion of the book was dedicated to scientific critique of theistic evolution, which is largely to say critique of the theory of evolution broadly speaking. Though I’m not an expert in science by any means, I interact with this portions I felt comfortable with, especially calling into question the movement from lack of 100% certainty to not having any possibility of evolution being true.

Book Review: “Theistic Evolution: A Scientific, Philosophical, and Theological Critique” Part 3: Philosophical Critique– Several philosophical issues are raised, from methodological naturalism to alleged contradiction of affirmations of Christianity that theistic evolutionists must hold. In contrast, I note that theistic evolutionists have a broader base to allow for ends in evolution, while also noting that the alleged contradictions are non-existent.

Book Review: “Theistic Evolution: A Scientific, Philosophical, and Theological Critique” Part 4: Theistic Evolution and the Old Testament– From the creation accounts to the historicity of Adam, arguments are made to the effect that the Old Testament cannot be compatible with theistic evolution. I note the circularity of several arguments the author makes, as well as questioning their use of the category “history.”

Book Review: “Theistic Evolution: A Scientific, Philosophical, and Theological Critique” Part 6: Theistic Evolution and Historical Christian Doctrine– Theistic evolution is often said to contradict the historic teaching of the church. Here, I analyze the extended arguments of one author who suggests this is the case, noting that at many points, modern categories are imported into the discussion of historical theology.

Other Reviews/Interactions (will update with more)

J.P. Moreland and the Book “Theistic Evolution” (Part 1: What do William Paley, Richard Dawkins, and J.P. Moreland all have in common?)– A two-part analysis of J.P. Moreland’s commentary on theistic evolution and its method. Part Two.

J.W. Wartick is a Lutheran, feminist, Christ-follower. A Science Fiction snob, Bonhoeffer fan, Paleontology fanboy and RPG nerd.
View all posts by J.W. Wartick »
« Remembering Bonhoeffer, 2018: Bonhoeffer was Not an [American] Evangelical, but he was an Evangelical Lutheran
A Brief Biblical Proof for Women Pastors – with Alice Guinther »