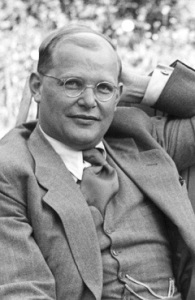 There is one sermon of Dietrich Bonhoeffer’s I can’t seem to shake. Sure, many of his writings stick with me, and I consider his influence absolutely formative in my own faith life. But in our time as people debate issues like immigration, welfare, and the like, Bonhoeffer’s sermon on Luke 16:19-31 delivered on May 29, 1932 in Berlin has spoken to me time and again. I’d like to share a few of Bonhoeffer’s own words. All are from Dietrich Bonhoeffer’s Works, Volume 11, Ecumenical, Academic, and Pastoral Work: 1931-1932 (Minneapolis: Fortress, 2012). The sermon begins on page 443.

One cannot understand and preach the gospel concretely enough. A real evangelical sermon must be like holding a pretty red apple in front of a child or a glass of cool water in front of a thirsty person and then asking: do you want it? …But it just isn’t that way–we all know that.

…We have spiritualized the gospel–that is, we have lightened it up, changed it. Take our gospel of the rich man and poor Lazarus. It has become common practice to see as the whole meaning of the story that the rich should help the poor. That is, it is turned into a story illustrating a moral. But this particular story especially, if one allows oneself to be affected fully by its original meaning, is something very different from that, namely, a very concrete proclamation of the good news itself. Admittedly so concretely, so powerfully worded, that we don’t even take it seriously anymore.

…Blessed are you Lazaruses of all the ages, for you shall be consoled in the bosom of Abraham. Blessed [are] you outcasts and outlaws, you victims of society, you men and women without work, you broken down and ruined, you lonely and abandoned, rape victims and those who suffer injustice, you who suffer in body and soul; blessed are you, for God’s joy will come over you and be over [your] head forever. That is the gospel, the good news of the dawning of the new world, the new order, which is God’s world and God’s order…

…Now, I ask you, where in the story of the poor Lazarus does it say anything about his inner life? Who tells us that he was a man who within himself had the right attitude toward his poverty? Just the opposite, he may have been quite a pushy poor man, since he lay down in front of the rich man’s doorstep and did not go away. Who tells us anything about the soul of the rich man? That is precisely the frightening thing about this story–there is no moralizing here at all, but simply talk of poor and rich and of the promise and the threat given to the one and the other. …And where do we get the incredible presumption to spiritualize these things that Christ saw and did very concretely?

We must end this audacious, sanctimonious spiritualization of the gospel. Take it as it is, or hate it honestly!

What does the gospel that was brought to the weaklings, the common people, the poor, and the sick have to do with us? …We disdain the mass of Lazaruses. We disdain the gospel of the poor. It undermines our pride, our race, our strength. We are rich, but with pride… It is so easy to disdain these masses of Lazaruses. But if just one of these would really meet you face-to-face–the unemployed Lazarus, Lazarus the accident victim, Lazarus whose ruin you caused, your own begging child as Lazarus, the helpless and desperate mother, Lazarus who has become a criminal, the godless Lazarus–can you go up to him and say: I disdain you, Lazarus? …And if you can’t do that, why then do you first act as if it were something great to be able to do that?

With this sermon, Dietrich Bonhoeffer preached an incredible message of law–one that would resonate with his audience, largely of privileged people in Berlin. The line about “our pride, our race, our strength” was a direct attack on the Nazi propagandists and the integration of the same terminology into the German Christian church. But he didn’t leave his message with the Law. Like any good Lutheran, he followed it up with the salve of gospel. He went on:

Who is Lazarus? You know it yourself: your poorer brother who cannot cope with life’s outward or its spiritual aspects… suffering, who craves the crumbs from under your table. …here at the end, in all humility, the last possibility must [be] considered, at the limits of all human and divine possibilities: we are all Lazarus before God. The rich man, too, is Lazarus. He is the poor leper before God. Only when we know that we are all Lazarus, because we all live through the mercy of God, do we see Lazarus in our brother…