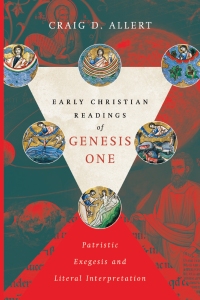 The Christian church has an interesting relationship with the earliest Christians. In the United States, at least, there is a kind of distrust at times of these early Christians, who seemingly got so much wrong. But alongside that there is an attempt to appeal to them, when convenient, to make theological points, claiming that one’s own belief stretches back to the earliest Christian era. Craig D. Allert, in Early Christian Readings of Genesis One: Patristic Exegesis and Literal Interpretation, shares insights into what these early Christians believed and taught about Genesis chapter 1 and literal readings of the same.

Allert begins the book by providing some context. First, he argues for why Christians today should care about what the early Christian writers (Church Fathers) thought about anything. Second, he argues that Christians have tended to distort or appropriate the Fathers into their own view, often without warrant. He explores this through several “real world” examples, including demonstrating that Ken Ham (a young earth creationist and founder of “Answers in Genesis”) and Hugh Ross (an old earth creationist and founder of “Reasons to Believe”) are mistaken in their reading of the Fathers in aligning with their positions. Then, he goes into the meaning of “literal” in the early church and shows how the term cannot easily be unilaterally applied even to individuals.

Next, Allert surveys a few specific Fathers and topics to show how they read Genesis one. Basil of Caesarea (329-379) is one who is often taken to be a literalist, but Allert demonstrates that Basil’s reading of Genesis one, despite his argument about needing to read it as the “common reading” cannot be taken to insist upon a “literal” or young-earth reading of the text. Origen and Augustine are also prominent Fathers in the text, as the former is taken to be a prime example of an analogous or spiritualizing of the text (not always the case) and the latter is taken as an ally for both sides. There is an extended discussion on the “days” of Genesis one, which the fathers read quite differently than most anyone does today.

Early Christian Readings of Genesis One is an excellent look at the way Christians read Genesis one in the earliest periods. It helps dispel a number of incorrect views of the same, and lets readers read large portions of these early writings for themselves. It is a valuable resource.

One thought on “Book Review: “Early Christian Readings of Genesis One” by Craig D. Allert”