Book Review: “The Morals of the Story: Good News about a Good God” by David Baggett and Marybeth Baggett 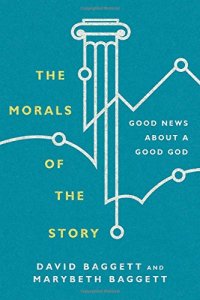 The Morals of the Story: Good News about a Good God is a witty look at the moral argument and some objections to it.

The book begins with an overview of the moral argument (more like moral arguments because there are several varieties) throughout the centuries, giving readers a working knowledge of the major philosophers who have engaged with the argument in the past. A brief section addresses Euthyphro’s dilemma in between the major sections before transitioning into positive arguments in favor of the premises of the moral argument. The argument the Baggett’s present is an abductive version of the argument rather than a deductive one. That is, their argument relies on observations of moral facts leads to God’s existence as the best conclusion from these facts.

David and Marybeth Baggett provide readers with anecdotes and examples to break up the more philosophical portions of the book, and there are study questions at the end of each chapter. The book is geared towards those with up to a moderate knowledge of the moral argument and can serve as an introduction to the same. Overall, the book seems to be presenting the argument in a winsome way alongside giving the basics such that readers will come away able to articulate the argument themselves.

The Morals of the Story: Good News about a Good God is a good introduction to one of the more intriguing theistic proofs. It acts as an introductory synthesis to much of David Baggett’s earlier work on the same argument. It’s recommended for those who are engaging in apologetics and interested in exploring this argument further. It could be used as a study group book, as well.