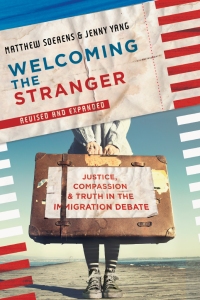 Welcoming the Stranger: Justice, Compassion, & Truth in the Immigration Debate is a deep look at the the topic of immigration and its relation to Christianity. The book provides a kind of three-pronged approach to thinking about immigration (this approach is surmised from the content as opposed to being explicitly noted in the book itself)- it presents anecdotes and firsthand accounts of people from different walks of life as immigrants or families of immigrants; it shows statistics and facts related to immigration (centered around the United States), and it offers a biblical perspective on immigration.

The stories included in the book are scattered throughout and make the topic of issue exactly what it is–a personal, deeply impactful issue on families and individuals. One area these stories made particularly eye-opening to me was the issue of legal vs. illegal immigration. Though it is often presented as black and white–people ought to wait to enter the country legally, the stories of people stuck in the middle belie this. If one overstays their visa, for example, they become “illegal” and if they leave the country and apply to re-enter, there is then a 10 year waiting period they must endure before reapplying. This complicates issues as families are spread across several countries and the means to pay for the application process is often in the United States with the job the individual had been working the whole time. Other stories highlight issues of taxes, benefits, poverty, and more.

The facts and statistics provided throughout the book–sometimes in in-text boxes–are extremely important. For example, the notion that “illegal immigrants” are intentionally coming to the United States to not work and take benefits is falsified when one sees that labor participation rate for immigrants (legal and illegal) is over 90%, which is higher than that of citizens born in the United States. Another issue is that of taxes–it is sometimes alleged that “illegal immigrants” don’t pull their fair share of taxes when compared to the benefits received. But in addition to paying state, local, and excise taxes they also pay property taxes and estimates from the Social Security Administration state that “nearly half [of undocumented workers] are paid ‘on the books’ with payroll taxes deducted from each paycheck” (27-28). This means they are paying social security which they will never be able to benefit from given their undocumented status. In effect, these undocumented workers are actually supplementing the social security of “legal” workers in the United States. Additionally, though undocumented workers benefit from roads, national security, parks, etc. they also are ineligible for a number of public benefits, such that their tax contribution is often higher than the alleged cost to the country. On top of this, even “legal” immigrants are often excluded from public benefits for at least the first 5 years of their residence (29). The narrative that immigration costs more than it brings in is, at best, vastly underestimating the complexity of the issue, and at worst it is simply false. The fact is, also, that immigration has been of great value to the United States both in the past and into today. Proof of this assertion is found across several chapters of the book as well.

The biblical text has much to say about immigration and the “sojourner in our land” (I have written about this issue here). The authors outline these vast swathe of texts across a chapter towards the middle of the book. They highlight how there are clearly immigrants and immigration in Scripture (eg. Abraham, Joseph, Ruth, Jesus). They note that there is a biblical mandate to care for immigrants and how, with Christ, there is no longer the issue of foreign/gentile/Jew but instead all are citizens together in Christ–an issue which is largely washed over in the heated discussions about immigration. Issues of justice–which are often taken by Americans to mean “act with justice regarding criminal justice”–are analyzed from the Hebrew text, noting that the issue is not criminal justice but higher Justice–God’s justice. It’s not merely is someone obeying the law, but is the law itself just (95)?

Finally, the authors offer advice about politics and immigration issues in the church today, largely built from conclusions found across the previous issues.

A few areas of critique of the book are likely, though this reviewer does not believe they present a serious challenge. First, the book is almost entirely centered around the issue of immigration in the United States. This does downplay its usefulness in a global perspective, but it makes it extremely valuable by addressing issues that are involved in the debate in the United States specifically. Second, some may critique the use of anecdotes as trying to reduce the issue to a few “sob stories.” Though this is a possibility, the authors are presenting firsthand accounts of real people with real issues, and even if it is a limited scope (which it does not seem to be), Christians ought to be concerned even about individuals. Third, one may argue that the use of Scripture is too broad to be applied to current immigration issues. There are a few problems with this response. For one, it seems to undermine the ability of Scripture to speak to our situation today. If one argues that Scripture cannot speak on a topic due to that topic’s complexity today, the it seems to set artificial limits on the ability of God to speak today. (It is certainly possible that these passages do not speak to specific issues today, but that argument needs to be made rather than dismissing a rather broad testimony of the Bible wholesale in favor of something like the laws of the land taking precedent.) Finally, the sheer broadness and variety of passages involved in making the case for caring for the stranger/immigrant suggests that such a quick move to dismiss this evidence is unwarranted.

Welcoming the Stranger: Justice, Compassion, & Truth in the Immigration Debate is a necessary, needed, and thought-provoking book that any Christian interested in immigration in the United States ought to read. I highly recommend it.

J.W. Wartick is a Lutheran, feminist, Christ-follower. A Science Fiction snob, Bonhoeffer fan, Paleontology fanboy and RPG nerd.
View all posts by J.W. Wartick »
« “The Eye of the World” by Robert Jordan – A Christian (re-)Reads “The Wheel of Time”
Holy Week- A reflection inspired by Dietrich Bonhoeffer »